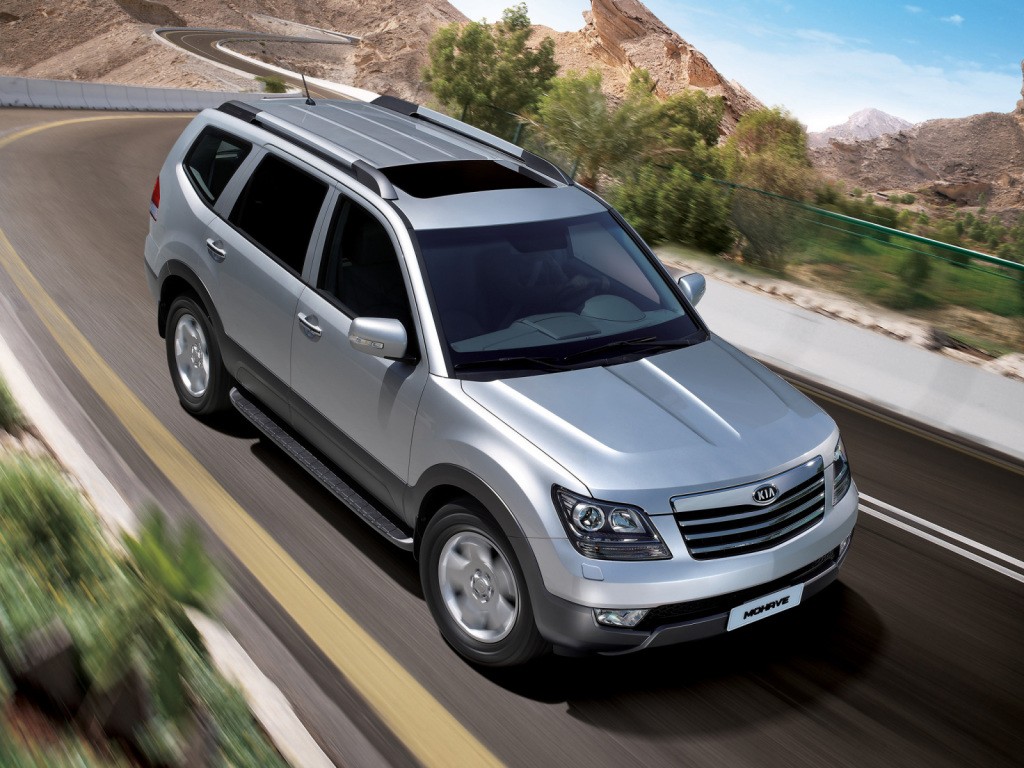 Despite the official presence in our market already since 2009, Kia Mohave is one of those cars that exist in isolation from this very market. Initially, the model was conceived for America, which is clearly visible by the dimensions (4.9 meters long), seven-seat layout and interior architecture with some features like adjustable pedal assembly. Actually, in the U.S. it was sold since 2008 under the name Borrego. However, in Russia Mohave not only sold, but also localized – since the same 2009 model was produced at Avtotor by large-knot assembly. Although, given the total absence of advertising and marketing costs, as well as quotas of a few dozen cars per month, annual sales have always numbered in the hundreds – three hundred, then five, then eight…

Another surprising feature of the Mohave is almost the same disregard for age and upgrades as the Land Cruiser 200. The model has been on the assembly line with minimal changes for more than 10 years, and presented last year, the “new” Mohave, in fact, was the first real restyling, which should prolong the life of the old man for at least 15 years. However, it does not help to choose an SUV on the secondary market: the model remains an “exclusive”. For example, on Avito there are less than a hundred (!) cars on sale at the time of writing. But it is not particularly surprising: sales in addition to quotas did not contribute to the price, which since 2009 has consistently increased from 1.5-1.8 million in 2009 to 2.4-2.9 million in 2017. And now the new Mohave in the only configuration costs 3.1 million rubles. The conclusion from this is simple: these cars were bought by those who knew exactly what they were doing, and therefore the owners are in no hurry to sell. How does it affect the technical condition?

As a rule, it is quite positive: if we put down the oldest cars, which cost about a million and are bought sometimes “in a hopeless situation”, the cars keep decent appearance and internal order. Taking into account a frame construction, one can start the inspection of Mohave from the bottom to be convinced at once that the owner did not consider it a real SUV. By the totality of technical data, including the transmission and suspension, with respect to the Mohave usually sounds definition of a “frame crossover”: the car does not shine with cross-country capability off-road. Knowledgeable owners understand this and do not torture the car, but those who bought it instead of the Mitsubishi Pajero or Nissan Patrol, can long try to understand the difference in their off-road abilities. It is not good for neither the transmission, nor the body, nor the frame, so the mud on the bottom and in the cavities is a bad sign. However, in absence of extreme conditions the frame and a body resist corrosion well, especially with additional anticorrosion. It is extremely desirable, by the way, since from the factory the underbody of Mohave is protected only partially, and in cavities under a gas tank and other elements there is no mastic, only ground and paint. So, besides frame number, absence of loose rust at the pins of suspensions and subframes, and also the condition of body parts, it is worth to estimate the integrity of underbody metal. At the rear you should pay attention to the spare wheel mounting, hanging under the bottom, and the work of the mechanism of its lowering.

The body on top is no surprise either. The most typical problems of the Mohave are the rusty hood, chips on the windshield frame and corrosion on the trunk door, especially in the license plate illumination area. During the warranty period these defects were even eliminated by the dealers, but now the car will have to be “treated” by itself. Smaller troubles are also quite expected – the corrosion on the bottoms of doors with rubber sealing and under the plastic of external moldings, and chrome chipping on radiator grill and trunk door liners, and in rich configurations – also rear bumper liners. The last one is sometimes even changed for simple black, not wishing to bother with aesthetics. In the interior it is traditionally worth checking up dryness of the floor: the “pool” in legs of the driver and front passenger is made by clogged drainages of climate system and the hatch, and sometimes the windshield flows trivially along the seam.

Speaking of the glass, about other details. Taking into account the rarity of the model, the body parts are often only original and have the corresponding price. For example, a windshield is about 30 thou rubles, a multi-piece front bumper costs about 50 grand total, front fenders cost 10 grand apiece… A hood can be bought as non-original for about 15 grand instead of paying 30 for a branded part. But the same trick will not work with the headlights, and the prices are exorbitant: 50 grand for halogen and 150 grand for xenon assembly. At that the search of spare parts from disassembly will be obviously difficult, so don’t count on it. In general, we should remember about some “payment for exclusivity”, which is not so justified here, as for some Hummer H2.

The Mohave’s chassis is an unmistakable hint of love for the road, not the off-road. Independent suspension schemes are used here: double wishbone at the front and multilever at the rear. Moreover, in base version ordinary springs and shock absorbers work in suspensions, and in expensive versions there are front adaptive shock absorbers and back pneumatic cylinders. However, according to the owners, even these extravagances do not provide the car with aristocratic “gait”: usually the repair of the suspension Mohave is a search of variants of shock absorbers, original and not very original, in search of its ideal. Adaptability of factory front struts, by the way, is rather conditional, but they do not cost such fabulous money, as “real” controlled shock absorbers of variable rigidity.

But the iron also reminds about rarity of this model by a scanty choice of non-original components. For example, a lower front lever can be bought only as an original for 10 thousand, a lower ball bearing is 2,5 thousand for original and 1 thousand for the only non-original, and hub bearings are changed as a set with hubs for 8-10 thousand regardless of manufacturer. Fortunately, little things like stabilizer struts are cheap and varied, and silentblocks are available for arm repair, and even original ones. True, with rear air suspension it is still necessary to be ready for rather moderate, but appreciable investments. First, pneumatic cylinders cost about 25 thousand for original and 16-17 thousand for substitutes. Secondly, purchase of the new compressor will cost about 60 thousand, and it is located in rather uncomfortable zone under a bottom, in a niche near a spare wheel. And thirdly, even with good condition of the main elements, failures of body position sensors, which connectors are protected as badly as at the same compressor are frequent.

Brakes in Mohave are simple: they are disc mechanisms in circle, and possible problems are usually purely age-related. It is worth checking the condition of lines and hoses and manual (or rather, foot) brakes, as well as to ask about reassembly of calipers. Expendables are not prohibitively expensive: for example, you can save money on the brake disk, buying an analog for 4 thousand instead of the original for 6, and instead of a set of “branded” pads for 10-12 thousand available options for 2.5-3. But everything is more complicated with steering in terms of large-assembly repair. The steering itself is quite simple, with power steering, but the steering pump, for example, costs about 40k, and the rack – 70, and there are no non-original options. That is the only way to save money is reassembly, benefit of repair kits on sale.

All Mohave has four-wheel drive, but its scheme can be different. The base cars used switchable all-wheel drive with leading rear axis, and more expensive cars have permanent all-wheel drive, but not with an interaxial differential, but with the same electromagnetic multidisk clutch, which connects front axis with slipping of rear one. Despite of possibility of forced blocking of the clutch and two-stage transfer gearbox with step-down row, such scheme obviously does not apply for off-road records, and exactly with it the possibilities of the car are limited. When choosing a used Mohave, accordingly, it is necessary to check the work of clutch and a downshift. During an elevator inspection, it’s important to assess the condition of the connectors and control units located just under the bottom, and the oil color in the gearboxes and transfer case combined with the clutch, as well as check the driveshafts and outboard bearings. The rear axle may be fitted with a limited slip differential, in which case a check of its performance is added, and the requirements for oil condition are stricter.

The list of transmissions installed on the Mohave includes three classic automatic transmissions. In gasoline models it was 5-speed A5SR2 (a variation of RE5R05A from Jatco), in diesel models until 2012 it was 6HP26 from ZF, and after 2012 it was replaced by 8-speed A8TR1 (Korean interpretation of 8HP transmission from the same ZF). In practice, taking into account the very small distribution of gasoline vehicles to choose between 6 and 8 speeds, depending on the available budget. The 6-speed box seems less preferable, than the 8-speed, and not only because of the age. Typical features of automatics like sensitivity to oil purity, aggressive operation of torque converter lockup and lack of cooling in 6HP26 are supplemented by high operating temperature and higher tendency to overheating. Taking into account the age, nowadays it is almost impossible to find a box, which hasn’t been rebuilt, but the installation of an additional cooling radiator and frequent oil changes is what not all owners do, even after the box overhaul.

It is easier to find alive A8TR1: the mileage is less, operating temperature is lower, and if the oil is changed at least once in 70-80 thousand, it still has quite a remaining service life. By the way, the filter is united with a plastic sump, so it is worth wondering if the owner spared “extra” 5-8 thousand for automatic service: oil change without filter change is doubtful activity. In any case, both first and second automatics are well diagnosed, so it is necessary to budget for their detailed inspection. About the five-speed automatic RE5R05A we can say briefly: it is not young and well known for Nissan and Infiniti cars, and its reliability is quite praiseworthy. But if the box kicks, most likely it needs rebuilding with replacement of worn out friction clutches, so it is worth either to bargain well, or to refuse from purchase.

We offered two engines, and both V6: the 3,8-liter petrol G6DA giving 275 hp, and the diesel G6EN for 3 liters, which we have logically included to tax advantageous 250 hp. It is necessary to say, that the high transport tax is not a unique disadvantage of the petrol engine: this V6 is not ideal. Chain timing is expensive to maintain, leaks are not uncommon, and the main possible risk – problems with pistons and oil consumption. In general, there is no regret that petrol cars account for only about 10% of the aftermarket.