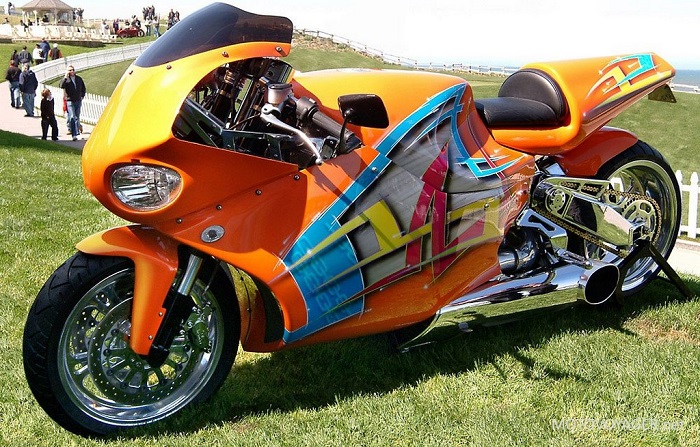 The battle of the giants for supremacy in motorcycling continues. After the breathtaking leap to 300 km / h leaders have decided that it is time to curb the peculiar arms race, and agreed to reduce the speed parameters of two-wheeled machines. The figure “299” seemed acceptable.

But the production of superfast bikes did not stop: the limit touched large-scale products, while small-batch, niche brands continued to create motorcycles whose performance is shocking when not restrained by restrictions.

The airplane-speed motorcycle was introduced to the world in 1999 and has continued to improve ever since. The surrealistic forms of the first version were not to everyone’s taste, but the performance was amazing.

The high performance was provided by a 175 hp four-cylinder engine with an unusual, by the standards of the time, capacity of 1300 cc. Subsequently, the volume has grown to 1340 cc, and the maximum power – up to 197 hp. If the first version was only slightly went over the 300-km barrier (306 km/h – the officially recorded speed), then its descendant has increased the rate by another 6 km/h.

Such results, complemented by acceleration to a hundred in 2.7 seconds, confirm the right of the machine to carry its proud name (Hayabusa in Japanese means “peregrine falcon”: this feathered rocket is able to attack the prey at speeds above 320 km / h).

Not surprisingly, the Italian manufacturer of custom motorcycles chose the name Furano for its next gem: this is the name of the wind from the Adriatic Sea.

The 164-horsepower model was produced not long, but it managed to shine with its remarkable sporting talents. The famous brand, which specialized in building racing bikes, successfully used engineering innovations (including engines and powertrain components) of the leading Oriental masters in the field, such as Yamaha, Suzuki and, of course, Kawasaki.

The fruitful collaboration with Lambo in its time was not wasted either. Thanks to all this, the YB8 gained a pass to the club of the fastest motorcycles in the world. When it debuted in 1992, it was the perfect gift for all wind-up enthusiasts – light, nimble and stunningly responsive, as well as one of the most expensive.

Series-produced Japanese competitors like the Honda CBR900RR cost less, but the Bimota justified its much higher price by being not only faster and more maneuverable, but also much more rare and exotic. A hand-built superbike, luxuriously equipped and stylishly decorated, one cannot help but admire.

Many enthusiasts were baffled by the unnatural power of the touring bike, but the 164-horsepower Honda convinced not only by its speed, but also by its exceptionally successful design.

For many years, this first-class piece of Japanese engineering played with stepping on the heels of the competition. BlackBird was produced until 2007, but even today is considered a role model: high driving comfort even at 280 km/h, a strong and smooth engine, lightning-fast execution of commands from the pilot and honed maneuverability made the “Blackbird” a welcome acquisition for motorcycle fans.

The Kawasaki team was not accustomed to losing, and in 2000 the infernally fast ZX 12R entered the arena. Like its leading competitors, it broke the 300 km limit, accelerating to 315 km/h. The fact was fixed and a limiter was put immediately to restrain the vigor of the two-wheeled bolide.

The model was produced for 7 years, ending its career in 2006. It was often used in drag racing and although its engine often blew up in extreme conditions, it has definitely remained an icon for many Japanese rocket enthusiasts.

A lot has changed in the world of motorcycles because of the speed limit. Machines continue to improve, becoming more powerful and showing better acceleration, but the hands of the majority freeze at the point of “299 km / h, not allowing average users to reveal the full depth of the possibilities of their vehicles.

The 200-horsepower ZX14R, which debuted in 2006 and is known on the European market under the code ZZR1400, joined the legion of tamed monsters. But that did not stop it from entering the elite lists of the best sports bikes.

With the ambition of a leader accustomed to winning, 190 hp and speeds up to 312 km/h, the luxurious “Italian” in its most powerful variation was a superb machine with sporty genes, giving its riders the strongest experience.

What is remarkable, the company which created it, possessing all the know-how in its sphere, still specialize in strong, made in street-fighter style high-speed naketyeds with impudent character.

To delight its customers with the perfect superbike, Yamaha has blended an unrivaled cocktail of power and controlled aggression, drawing on the racing experience of its teams in WSBK and MotoGP.

The company’s flagship and pride, the 200-horsepower, 204-pound YZF-R1M, features, among other things, a carbon fiber fairing taken directly from the donor M1 racer. Yamaha’s main goal has always been to combine beauty and technical excellence, which is reflected in this stylish, dynamic athlete.

BMW has always been present in the world of motorcycle racing: you probably know the word “Beemer” – well, it was coined specifically for the old BMW racing motorcycles. The Bavarians never disappointed and created not only iconic off-road GSs with massive K-Series grand tourers for “hairy bikers”, but also true speed demons.

One of the highlights of the latter group is the 207-horsepower S 1000 RR with excellent dynamic performance, crisp handling and lightning-fast speed (held back at the proverbial “299” mark for safety purposes).

It started its life as a racing bike in 2009, and after a few months has passed into production for the general public, so the characteristics of this cutie are very close to the officially accepted sport parameters.

Ducati motorcycles are true works of human genius. When you see them, your heart starts beating faster. A good example is the Panigale V4 R: a lightweight, agile, extremely easy to handle racing bike, approved for use on ordinary roads.

Its aerodynamic package was developed by the sports division of Ducati Corse, and the result is a natural rocket – strong, tireless and damn fast. It can be raced on the highway with gusto, but its natural habitat is definitely the racetrack.

Another fierce beast in a motorcycle disguise: 310bhp, 2.5sec to 60 mph, 400km/h. Beginners should stay away from it: it takes years of experience to tame such enormous power. But to the one who copes with it, it will give a ton of adrenaline.

This brutal beauty will definitely be a highlight in any competition of the fastest production motorcycles.

Manufactured by Marine Turbine Technologies since 2000, each one-of-a-kind is custom-made – by hand and tailored to the customer’s wishes.

Powered by a modified Rolls-Royce/Allison air motor, the American 227-pound hyperbike is capable of accelerating to 100 km/h in just a second and a half. Not a motorcycle, but a dream.

No doubt about it, this is the king. Powered by a 10-cylinder V-engine from the Dodge Viper supercar, this monster generates 500 hp, accelerating to a hundred in 1.8 seconds and ramping up to 560 km/h. Formalists will notice it has four wheels instead of two, but it’s still a motorcycle. It weighs as much as 680 kilograms. Ten examples have been produced so far: each one was assembled by hand and cost more than half a million dollars.