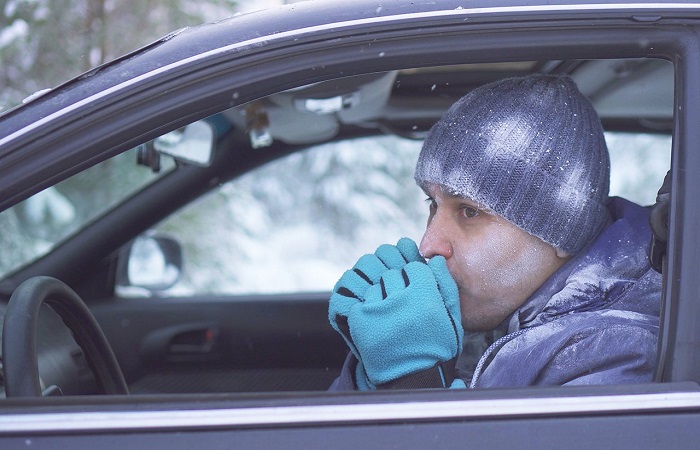 When we get home after a long winter’s day, we rarely think about anything else but getting warm, drinking hot tea and finally relaxing. Despite the built-in “heaters” and other devices that heat the cabin on the road, winter inside the car can be just as uncomfortable as it is outside. It is dark, cold, and there is a temptation to hurry back to the warm house and postpone unloading the car.

But there’s nothing worse than jumping into the cab in the morning and finding that the can of soda you bought yesterday exploded and flooded everything around you.

Most of us know that many things should not be left in the car in the summer, especially if it’s parked in the sun. For some items, the extreme cold can be just as dangerous as the heat. Low temperatures can do serious damage to them if they are left for long periods of time in a freezing interior or trunk. Don’t store them in a cold garage or barn either, as both of these places will have the same adverse conditions.

Chances are you have pills stored in your car – like paracetamol, just in case you suddenly get a headache and you’re in the middle of a busy day. A drop in temperature below freezing won’t make them harmful, but they’re unlikely to work properly.

In the case of insulin, the case is more serious. Insulin is an essential part of an addict’s life, and if you forget it in a frozen car, don’t think you’ll be fine in the morning. Unopened insulin should be stored in the refrigerator, and once opened, at room temperature closer to cool. If it is overheated or frozen, it will not have the desired effect and will not lower blood sugar levels.

Moreover, at temperatures above +30 and below zero, the hormone begins to break down. If you freeze it and then try to use it warmed up, the damage will already be done. And this is not the only drug that requires specific storage conditions.

Keys, wallet, phone. This is the usual formula we follow when getting out of the car. Three essentials. Rarely do people find that they forgot these items in the car and just decide to leave them there. Nevertheless, it does happen. And while the first two items won’t be hurt by the cold, it’s a different story with electronic gadgets.

Most users have ever experienced smartphone failures due to overheating. That’s because they, like other similar equipment, including laptops and tablets, work most effectively at temperatures between 0 and +35 degrees.

As with overheating, if these devices are too cold, they can run into problems that make it difficult to use them at an optimal level. Exposing them to climate stress is one sure way to shorten their lifespan. Also, I hardly need to remind you of the damage condensation causes when the plus/minus temperatures change, quickly killing the appliances and voiding the warranty.

In the world of musicians, everyone is well aware of how negatively the weather can affect instruments. If they are left in the trunk after a concert or lesson, they need to be picked up as soon as possible. Guitars and violins especially don’t like the cold: not only can they lose tuning due to the cold weather, but they can even become unusable due to deformation of the decks.

Frost quickly causes thin wood to crack, and in wind instruments the valves are particularly affected. You don’t have to be a musician to understand how bad this is. If your beloved balalaika or flute has inadvertently spent the night in the cold, warm it up gradually, away from heating radiators. Rapid heating will cause damage, and repairs can be expensive or impossible to make at all.

An empty fuel tank threatens more than just getting stuck halfway home. The more fuel in the tank, the less likely it is to freeze, which can lead to all sorts of trouble and malfunctions. To keep the fuel lines stress-free, try to fill up more often in cold weather by keeping the tank at least half full. Frost can also affect your tire pressure, so measure it regularly.

Overheating and overcooling can cause the contents to deteriorate and sometimes cause the package to depressurize. This applies to any pressurized aerosols, including hairsprays, air fresheners, paints, repellents, etc. Although it happens quite rarely, once the frost starts, don’t leave such things in your car.

Leaving beverages in the car for extended periods of time in extreme temperature conditions can cause them to depressurize and make a mess in the passenger compartment/trunk. After stopping at the grocery store, don’t forget to take home beer, juice, soda, milk and other liquids, whether they’re in glass bottles, tins or tetrapacks.

You may have heard that the sugar and/or alcohol content prevents freezing, but that’s not true – it just takes longer. Soda freezes at about 30 degrees below zero, 21-27 is enough for beer, 23 is enough for wine. Once that happens, these bottles are just as prone to cracking and shattering as any other. Bring them inside, don’t store them in the garage!

Even with regular bottled water be vigilant: a 0.5-liter bottle will freeze in just 30-45 minutes when the temperature drops to -32 degrees, and even faster at lower readings. If the plastic casing cracks, there will be a puddle afterwards. A burst container of sweet water (as well as compote, juice, beer, wine) will cause an even bigger mess – sticky and hard to clean up.

Many cleaners, including glass cleaners, dishwashers, kitchen and bathroom surfaces, contain large amounts of water. This means that freezing can cause these solutions to swell and cause bottles/containers to crack.

Other types of household cleaners, including laundry detergents, polishes, floor cleaners, etc., contain surfactants and polymers that can delaminate or stick when exposed to cold, negating their effectiveness.

Many types of paints and varnishes (including water-based and latex paints) should not be left in freezing temperatures for long periods of time. The reason is simple: their ingredients can freeze, expand, separate, or stick together, making the compound almost unusable for its original purpose.

If you carry paper documents – tax forms, bank statements, passport, or anything else you don’t want to lose, don’t leave them in the car. First, there is a risk of theft, and second, there is a chance that the frost will damage valuable paperwork either directly or through nearby objects.

Exposure to serious cold can destabilize, for example, bottles of chemicals: they can crack, covering the entire surroundings with stains.

Don’t expose eggs to extreme cold – when they freeze, their shells often crack, allowing germs to get in and cause spoilage. If this happens, you’ll have a long time to clean the upholstery of the spilled slop, and throw the eggs themselves away. But if they remain intact, though frozen “in ice”, after thawing they can be safely eaten (only the yolks become thick and do not mix well with other ingredients).

As for canned foods, some behave similarly to carbonated cola or beer – they freeze and expand when heated. This can break the seal and ruin the food. According to their manufacturers, a frozen can should only be used after it has been safely defrosted in the refrigerator, which means letting it thaw in a cool place before opening. If the opened product seems unusual, looks or smells bad, throw it away, don’t try it!

Prepared baby formula, including milkshakes, porridges and purees, can delaminate at sub-zero temperatures, becoming either inedible altogether or changing their original properties. In both cases it is best to discard them.

You know very well that you should not leave pets in the car in summer – the same goes for the winter months. The temperature inside the car can quickly drop to the outside temperature, putting your pets at risk. By locking your pet inside, even going for a quick run somewhere, you increase the risk that your pet will freeze to death if something prevents you from getting back in time.

If your eyebrows went up at the sight of these items on the list, consider this. Various tempting items left unattended in your car always attract thieves. And, once they open the interior, they are unlikely to carefully seal it back up to keep it warm. Anything that won’t be carried off by the thieves and can go bad because of the cold will come to a screeching halt. And the last thing you’ll want to deal with is a stolen credit card with unauthorized charges.