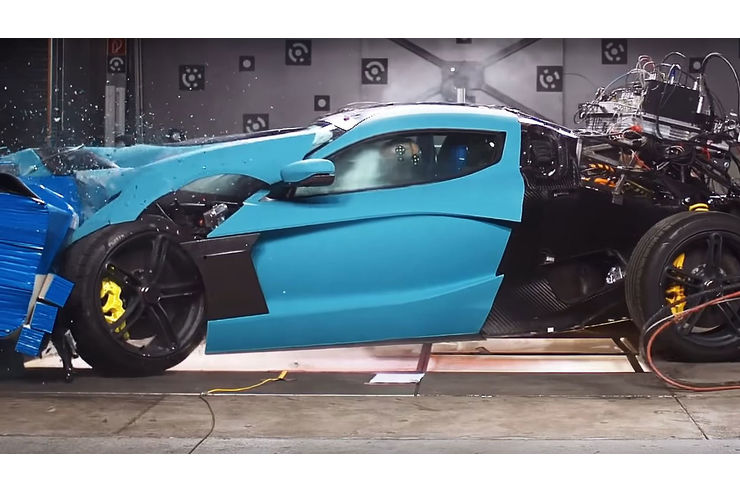 Rimac Automobili is already subjecting the C-Two to intensive testing: In crash tests, the manufacturer destroys many of its prototypes. The electric hypercar will reach customers in 2021.

The Corona pandemic is also delaying the launch of the Rimac C-Two hypercar. The electric sports car was originally scheduled to debut at the 2020 Geneva Motor Show, but the show was one of the first major European events to be cancelled due to the rampant Covid 19 virus. Instead, the Rimac C-Two, whose final name will be announced in late 2020, will be delayed until 2021.

Rimac C-Two for all relevant markets

Rimac continues to build prototypes for homologation and crash testing on a new production line at its Veliko Trgovišće plant. “We want this car to be intuitive and user-friendly, yet snappy and powerful,” Mate Rimac said several months ago. “This process of testing and refinement is critical to ensure we deliver on our promises.”

To prepare for the official crash tests, the e-sports car pioneer keeps conducting them itself, posting photos and videos of how they “successfully” went. In this way, the Croatians want to ensure that their first real production car can be approved for the road worldwide and sold in all major markets. “This is a nerve-wracking process for the whole team,” Rimac says. But also for those viewers of the crash video, who can roughly estimate how high the financial equivalent of the deliberate damage is.

Another model with “more punch

A total of 17 prototypes have been produced or are in production. Ten pre-series models will then roll off the production line. In total, it takes five weeks to produce a model. If the plant is working at full capacity, four customer cars are later produced per month.

But even though the Rimac C-Two hasn’t really hit the market yet, company boss Mate Rimac is already thinking about further model versions. “Future variants of the car will be race track focused,” he told Top Gear magazine. In its current state, he said, the C-Two is geared more toward comfort, with features such as electrically adjustable seats and tires suitable for everyday use. That leaves room for something “with more punch,” as our British colleagues correctly note.

Is Rimac planning to set the Nürburgring record?

Rimac’s statement was in response to the question of whether the Croatian electric car specialist is planning an attack on the Nürburgring record. “I would be interested, but maybe not with the C-Two.” After all, he said, the current record holders, the VW ID.R and Nio EP9, are race cars, and the Rimac is more like the reliable, daily-use electric hypercar.

Equipped with all kinds of measuring devices, the Rimac C_Two is currently doing development rounds in Nardo

The second sports car model from the Croatians is, of course, again powered purely by electricity. The C-Two is larger and even more luxurious than the Concept 1, but remains a two-seater. A maximum of 100 to 150 units of the C-Two are to be built, 20 of them in the first full year of production. The number of units is low, but the price is exorbitant. Rimac is talking about over one million euros.

Rimac has also upped the ante when it comes to the powertrain. Equipped with four electric motors, two per axle, the Rimac C-Two has an output of 1,408 kW – the equivalent of 1,915 hp – and a total torque of 2,300 Nm. This should enable the electric sports car to sprint from zero to 100 km/h in just under two seconds, the 300 km/h mark is reached after 11.8 seconds, and a top speed of 412 km/h is stated. The necessary energy is provided by a 120 kWh battery pack. In standard mode, this should enable a range of 650 kilometers. The battery is charged via a fast charger – 80 percent in 30 minutes. 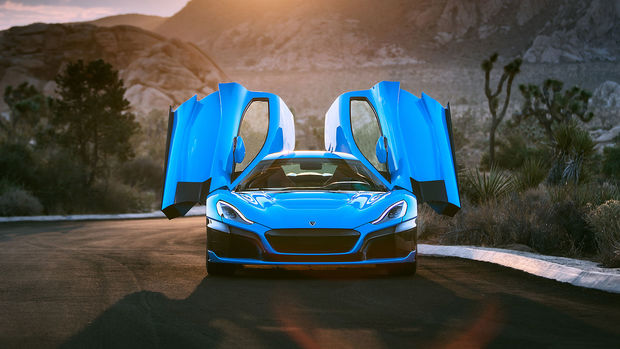 The Rimac C_Two made its debut at the 2018 Geneva Motor Show, at that time still as Concept 2.

In terms of design, the Rimac relies on classic mid-engine sports car lines and combines them with gullwing doors that open upwards at the front. In addition, Rimac relies on various active aero elements. The front hood, for example, is crisscrossed by large air ducts that can be opened or closed by flaps as required. The side air intakes in the front apron are also equipped with active flaps. The large rear spoiler is adjustable in height and tilt and can also be used as an air brake. Further controls can be found on the fully clad underbody, which is shaped like a Venturi duct.

Autonomous up to Level 4

The chassis itself is a carbon fiber monocoque, while the crash structures are formed from aluminum and carbon. The battery modules are located in the center tunnel, the underbody and behind the passengers, while the electric motor modules are located in front and behind them respectively. There is an input gearbox on the front axle and two on the rear axle. A torque vectoring system ensures optimum torque distribution. 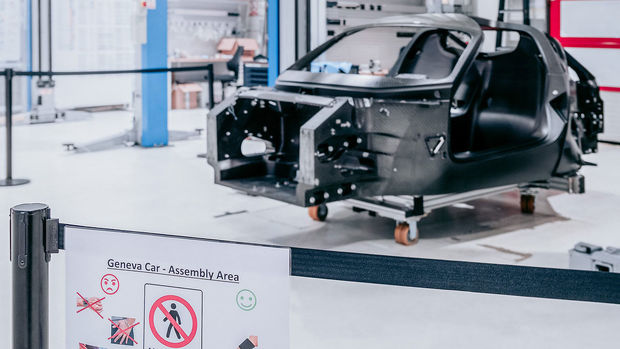 The Rimac C-Two gets ready for its – ultimately aborted – appearance at the Geneva Motor Show.

The digital cockpit provides information on all energy and power flows. This is also where all the other driving information is fed in. Further displays can be found on the center console and the dashboard. Three additional displays are available to the front passenger. Rimac incorporates numerous sensors, radar systems, lidar radar and camera systems for complete monitoring and Level 4 autonomous driving functions. The trunk behind the passengers can be configured in many ways, including for helmet transport, for example.

Even a young small-series manufacturer like Rimac has to prepare conscientiously for the start of series production as well as endure the usual approval scenario and complete crash tests – even if it hurts to watch. And it has to face tough competition at the Nürburgring at some point – otherwise it’s hard to build up the necessary reputation. But Mate Rimac seems to have a plan. We’re curious to see when he’ll start putting it into practice.