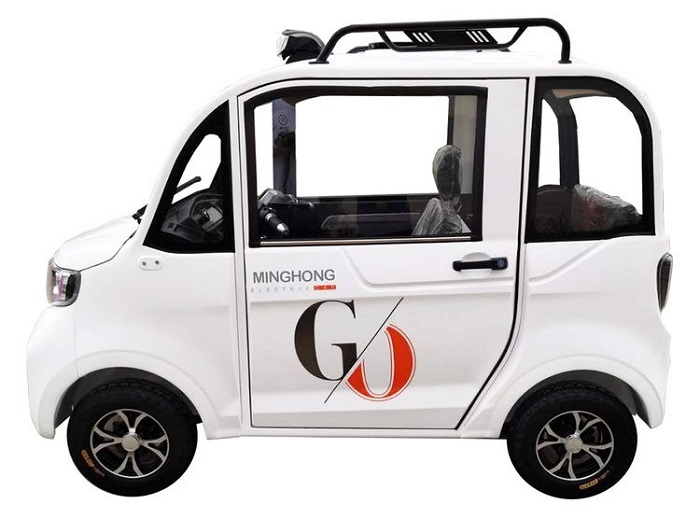 New cars don’t always cost a fortune. You can order modern models from China, which are cheaper than the sensational Indian Tata Nano and are technically suitable for use on ordinary roads… But how feasible would such a purchase be?

You see, we are not talking about full-fledged cars, ready to race on highways. Basically, they are Chinese slow-moving wagons with hard-to-pronounce names that use the same basis as electric scooters or three-wheeled rickshaws.

For their insanely low price, they very skillfully mimic solid cars, although they are one step away from a golf cart. Among them are small town cars costing less than $1,500, and even passenger vans for 7-11 people for $4,000-5,000. Notice the new ones, with factory packing on the seats. And if your expectations are low enough, they are actually impressive!

This is one of the 4×2 pickups based on a golf cart that is powered by electricity. “Solar battery” listed on its equipment list isn’t efficient, but it does have a pneumatically raised hardtop cargo platform (which isn’t usually a free option, say, for the Silverado).

“Luxury” versions include a generator to charge the lead-acid battery and even the ability to use air conditioning, though it’s usually just a fan system mounted in an enclosed slit in the ceiling.

“A light truck,” as the manufacturer calls it, with a 1300W engine, automatic transmission, RWD drive and a 1200x770x550mm body is designed for four people. Inside, you get a working LCD screen and a multimedia player.

The faux leather looks realistic: the developers have conscientiously treated the details, even taking Ford’s design for the volume knobs and gearshift.

True, the speed is not enough – up to 45 km/h. But let’s face it, for the price of an inexpensive moped you get a hell of a lot in one package!

There was a time when these cars cost less than a thousand dollars, but now they’ve gone up in price thanks to a lot of youtubers picking up on the “cheapest car in the world” trend and increasing demand.

Nevertheless, Changli has kept the price threshold low for its products, and thanks to bloggers, we’ve learned about a ton of tempting offers from this company. Scooters, tricycles and four-wheeled mini electric cars for adults are one of its main lines (including private and commercial vehicles, family models, pickup trucks, variations for the elderly and disabled).

Such transportation is not fast, but it is quite safe and comfortable, plus it is environmentally friendly. If you want your own, you just need to negotiate the shipping method on Alibaba, and then pick up your new car from the port.

Among the mass of interesting offers from China there are quite “European” vehicles – also cheap, but more comfortable, richer equipped and stylish in appearance.

For example, 4-seater YJ-LJ-V7. This 700-kilogram compact looks as real Mini Cooper, in spite of the fact that it is almost on half-meter shorter. At first, it and other similar cars were bought for fun and laughter, but the giggles quickly turned to a thoughtful “hmmm…” when people realized that these “toys” could actually be a good deal.

Frankly speaking, it is one of the “potentially luxurious” cars, the cost of which is shocking against the background of such generous equipment. But yes, it is also powered by a low-powered electric plant and is unlikely to get along with its neighbors on the highway at 50 km/h.

One more representative of the ultra-budget segment. And, of course, also comes from the Celestial Empire. Who else but the Chinese will develop and sell cars for the price of not the most expensive smartphone?

In addition to Changli, whose products are distributed in bulk in all corners of the world, there are many other manufacturers offering ridiculously cheap new cars.

Minghong, for example. Not long ago, customers paid $1,200 for its best-selling, rear-wheel-drive S1-Pro; today it costs a bit more.

This 2.4-meter plexiglass and plastic wagon looks nice enough and successfully handles most daily tasks. Outside, there are LED high/low beam headlights and disc brakes on all 4 wheels; inside, seats with faux leather covers (standard layout is 1 driver and 2 passengers in back), digital instrument display, multifunction steering wheel, and power windows.

This tiny five-door compact from Haibao is great for family outings in the countryside if you don’t have large people in the company.

Among the main “attractions” of the car is an infotainment system with a touch screen (which is not often found even in much more expensive cars) – though in Chinese. It is supplemented by a backup camera, solar panel and adjustable interior illumination.

There is nothing else interesting. Behind a luggage door there is theoretically a place for storage of things, but if you do not remove back seats, hardly anything larger than a package with groceries will fit there. Still, at this price, is it worth picking on?