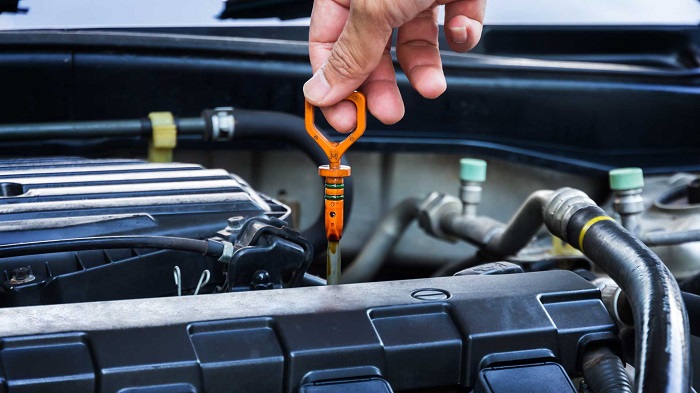 The oil level in the car engine is one of the most important indicators, according to which it is possible to judge the current state of the engine. Every driver knows how important it is to monitor this parameter, because one mistake can lead to major repairs of the power unit, and even to its complete replacement.

However, despite this fact, the consciousness of the motorists continues to grow myths about the oil level, which directly threaten the safety of the engine.

What should the engine be like for the oil dipstick to show the correct level when checked? A knowledgeable technician will answer this question without a stutter, but how do you explain to a beginner that checking the oil level on a cold engine is a bad idea?

This misconception has been wandering among car owners since the times of the Soviet Union, however experienced drivers even then recommended to check the oil level on a warm engine. Here is how to do it correctly:

The best option is to check the oil level in the engine at a gas station. Warmed engine, perfect idle time during refueling, correct oil level, and if necessary, there are always original brands of oil available for sale – because it is easiest to find them here.

Checking the oil level on a cold engine, the driver risks getting the wrong information, because the liquid, being cold, is maximally compressed, and on the dipstick it will most likely be on the minimum mark. If in this condition to add oil to the normal level, on a warmed up engine it will squeeze out all gaskets and seals, and it is already an expensive repair.

If a car has stood in a garage for a long time – for example, for a whole winter, the oil level should be checked obligatory, without starting the engine. In fact it is necessary to make sure, that it is there at all.

Dependence of oil level on mileage

For some reason, some drivers, who spread this myth, believe that the oil in the engine is consumed equally throughout the mileage between changes of fuel and lubricants.

But this statement may be true for a very limited number of cars and only under the condition that their engines will be filled with such a perfect oil, which even in the laboratory conditions is difficult to obtain.

In reality a good oil starts losing its properties after some time and the engine becomes much more voracious in its respect. For example, after 5 thousand kilometers its consumption will be not 100 grams per thousand kilometers, but 200. Thus, by 10 thousand kilometers the lack of oil can make up to one and a half liters, and on especially voracious cars such indicator can be increased in several times, so that already on half of run low oil level will light up.

Naturally, it is impossible to lead it to such a state, in fact, having trusted a known misconception, it is possible to ruin a brand-new engine, especially if it is filled with oil that is not of the highest quality. Check the level more often and do it properly.

A good engine does not eat oil

And here it is a real diversion among motorists. An experienced mechanic may dismiss this fake, but a motorist may think that there is no reason to check the oil level, as the engine is new – it has just been produced!

But this is a big delusion. As we have already found out from the previous point, each engine eats oil to some extent, and it is not some malfunction, but banal physics. If there was no oil consumption at all, the pistons of cylinders would run dry, and already in one thousand revolutions the new aggregate would turn into scrap metal.

Fortunately, engineers have thought of everything, and the oil film is not erased by the oil wiper rings – thanks to it, the engine can run for hundreds of thousands of kilometers with almost no wear and tear. It is this film that burns off when the air-fuel mixture explodes, following the exhaust gases into the muffler, gradually reducing the oil level.

And the lower its properties become over time, the thicker the film stays on the cylinder walls. That’s why you need to watch the level periodically, every thousand kilometers, and in the trunk there should always be at least a liter of the same oil that was poured into the engine.

If you pour other oil into the engine, it will break down

This clause is more relevant for emergency situations – for example, when on the highway you suddenly realized that the engine oil level is critical.

In normal life, when you can walk to the store, it’s better to fill the same oil that you poured at the change. This way the flow will be more even, and you’ll be sure that the engine is well-protected.

But if you got in a desperate situation, and you need to drive 50-100 kilometers to the nearest service station, you may pour even diesel truck oil into the engine.

In principle, for such a short kilometer with it in general nothing should happen, but it is better after troubleshooting to immediately replace the fuel and lubricants with a new one, because the quality of the oil you will find on the highway, most likely, will not be of the best quality.

And here it is who is good at what. Recommendations on how much to pour and what level is better, you can meet a huge number on the Internet, as well as among friends. One should never trust anybody in this business, and one should fill up the oil strictly according to the golden mean law – not too much and not too little so as to mark on the dipstick exactly midway between Min and Max.

Why do you need it? Too high an oil level will cause gaskets to press out, especially if you change it when the engine is cold. Too low a level, despite all the assurances from auto experts that this will minimize wear, leads to the risk of a critical level, because we also remember the oil burn.

The minimal level really relieves the work of the engine – it is easier to rotate, the wear is really reduced, but only in city driving conditions. But as soon as you leave on a freeway, oil starvation – one of the most dangerous phenomena in engine’s work takes place immediately. The worst thing that can happen is that your cylinders get fouled – not a pleasant prospect.