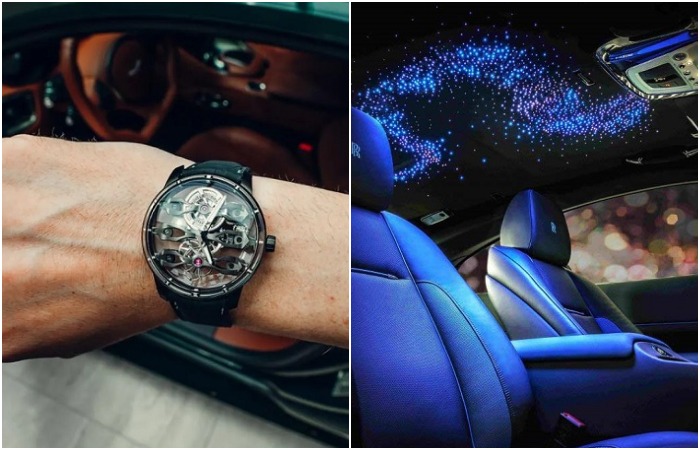 The number of cars and their manufacturers on the market today gives a huge choice for the potential buyer. Therefore, automakers have to come up with all sorts of gimmicks and options that could diversify their products and attract the consumer. But sometimes they differ not only in their functionality, but also in cost. Here are five non-trivial driver’s tricks from car brands that cost a fabulous amount of money.

A book about a brand’s history

The company Bentley, celebrating its century anniversary, decided to arrange a surprise for its customers: released products, oddly enough, to the bibliographic market. So, a book about the history of the brand was published, and the inherent luxury in the matter of design was not ignored. The book Bentley Centenary Opus tells about the most significant events in the history of automobile concern, but its circulation is only 607 copies, among which the last seven are a special edition called 100 Carat Edition. The folio has 800 pages without a case, but it weighs 30 kilos as it has hand painted water colors on silk paper and a leather cover from the Mulliner court studio which is also encrusted with a hundred of diamonds and platinum. This luxury costs an insane £200,000.

At least two car brands – Bentley and Rolls-Royce – are respectful of the leisure time in nature that their customers can enjoy. For example, the Bentley Bentayga has a special version, equipped with everything that can be useful for fishing for 230 thousand dollars, and the Rolls-Royce Cullinan, the first crossover in the history of the brand, is also presented by a modification Viewing Suite, which includes a table and two chairs to set them in the nature. Other such gadgets also include branded “picnic sets”, and Rolls-Royce recently introduced a portable “champagne chest” made by hand from expensive materials with good-quality filling.

Once again, one of the headliners of this luxury for the car was Bentley, who built a tourbillon design watch out of white gold and diamonds for the Bentayga’s $170,000 front fascia. As for Aston Martin, they chose a simpler way; somehow they accompanied the presentation of their new supercar with a wrist chronograph with the company logo. The watch was developed by the famous Swiss firm Jaeger-LeCoultre. In addition to the special design, the chronograph features a transponder function. The cost of such watches is 44 thousand dollars.

Another popular accessory offered by automakers is branded travel bag sets, which are often made in the style of the model chosen by the buyer. For example, Audi cooperated with Patrick Hellmann, a well-known manufacturer of luxury suitcases, and Ferrari once developed a set of golf bags for the F12 Berlinetta model, which cost about $14,000. But BMW outdid everyone by concluding a collaboration with Louis Vuitton to create a set of bags for the luggage compartment of the BMW i8 hybrid sports car. Louis Vuitton even developed a new fabric with carbon additives for this production, and it cost 20 thousand dollars.

Rolls-Royce decided to diversify the leisure time of their customers the opportunity to enjoy the magnificent artificially created landscapes of the night sky directly in the car. We are talking about the option called Starry Sky, which creates the effect of the night sky. It takes from 9 to 17 hours of manual labor, during which the craftsman makes 800 to 1600 holes with a special tool to implant LED strands in it. This also allows each Rolls-Royce owner to create an individual map of the starry sky, and sometimes clients are asked to write something on the ceiling in this unusual way. The cost of such an aesthetic option is at least $12,000.