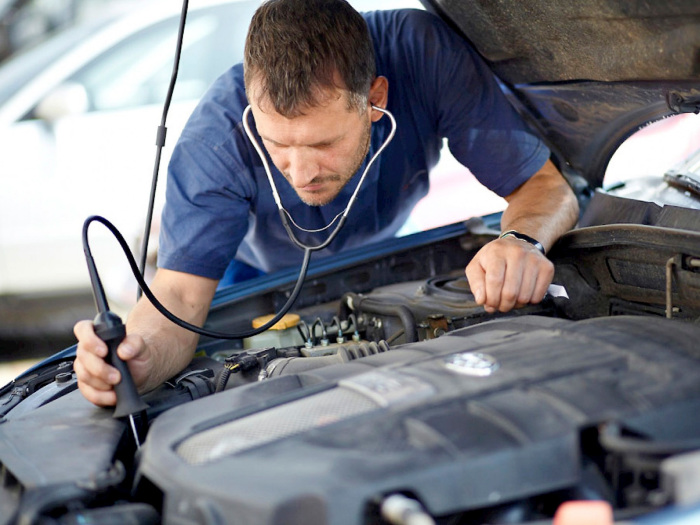 If there is an opportunity to periodically perform a visual inspection of the timing belt, it should be taken advantage of. Put the “swallow” in gear, then slowly crank the crankshaft with one of the wheels out and the plugs turned. Carefully examine the belt. If it shows obvious signs of wear, then this important component needs to be replaced urgently. It is necessary to do it even if the belt has not yet worked its service life according to the established regulations. 2.

Timing belt is leaking from under the timing belt cover

Are oil leaks starting to show up around the timing belt cover? This is a very bad sign. Most likely, oil is leaking from under a worn crankshaft oil seal. There is also a chance that antifreeze is leaking from under the pump pulley and from leaking joints. Both fluids are guaranteed to get on the timing belt and significantly accelerate the wear of the part. In this case, not only the belt will have to be replaced, but also the leaks will have to be repaired.

Due to incomplete combustion of the mixture in the engine, melting and destruction of the catalytic converter may occur. Incorrect ignition is the reason of it, because of which a part of fuel turns out in the exhaust system. A sure sign of such breakdown is the black smoke coming out of the exhaust pipe “popping”. If the car is diagnosed with such a problem, it is highly likely that there are also known problems with the timing belt.

Very often the timing belt becomes “chunky” as a result of wear and tear. The choppy part, in turn, becomes the cause of clicking, cracking, shuffling noises when the internal combustion engine is running. These noises will come from under the system covers. The higher the engine defenses will rise, the more frequent the characteristic noise will become. If the belt has been replaced and the ticking sound has not disappeared, the problem was most likely either the water pump or the idler bearing.

If there are problems in the ignition operation of the car, it’s time to check the condition of the timing belt. The fact is that a poorly tensioned or just a badly worn belt can easily jump a few teeth. It causes engine malfunction: air-fuel mixture ignites too early or on the contrary too late. It is also not excluded the appearance of strong vibrations and dips in the traction of the power unit.