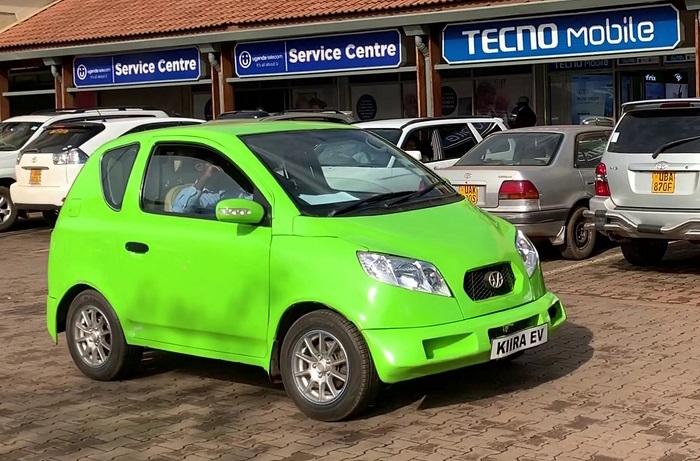 With the departure of European, American and Japanese car brands, the market is filled with models from China and Iran. Now we are also waiting for the products of the African car industry. They may soon appear in the streets, but still in theory. No, it will not be the famous Laraki sports car made in Morocco and not the army monsters Marauder known from Top Gear show. We do not know much about other African cars. It is time to fill in this gap.

Thus, Uganda is dreaming to enter the car market – it is mentioned by Ambassador Moses Kizige. Uganda’s auto industry is only 15 years old, 96% of this business belongs to the state company Kiira Motors Corporation, whose shareholders are the Government of the Republic of Uganda, the Ministry of Science, Technology and Innovation and the Office of the President. The remaining 4% is owned by Makerere University. The car manufacturing plant employs about 2,000 people.

The Kiira EV, a plastic-bodied two-seat, three-door electric car with a plastic body, created by students at Makerere University, is offered for export. It appeared on the domestic market in 2011. This brand is practically unknown. So what are its advantages and disadvantages?

Under the hood of the Kiira is an electric motor with 26 hp and a small battery. On a single charge you can go no more than 80 km. The design of this car may seem strange to European consumers, but for a car from the “third world” it is quite usual. In addition, we should consider the age of the model.

In addition to Kiira, Uganda can offer for export a hybrid EV Smack and a gasoline EVS sedan. They are produced at the same plant. The EV Smack has an electric motor and a combustion engine with a combined output of 109 hp. The internal combustion engine serves as a generator.

The EVS is a premium car with a four-seat saloon. For commercial use Uganda offers passenger buses of Kayoola division. The project is to produce solar-powered coupes and buses.

The Innoson IVM Fox compact hatchback is a brainchild of Nigerian automobile industry. The founder of the company proposed to completely renew the car fleet of the country. By design, the Nigerian hatchback is more attractive than the model from Uganda. Aggressive features in some body parts make it quite modern.

The Innoson products are based on the development of the Chinese concern BAIC, which has licensed the production of SUVs in Nigeria. Therefore, the Innoson IVM Fox has quite a serious equipment.

The Innoson lineup includes more than ten vehicles developed by the PRC. Among them:

But the price of Nigerian cars was overpriced. They can not compete with the same Chinese cars. In this regard, cars from the secondary auto market in Nigeria are more preferable.

The sign of Kantanka is a five-pointed star. Ghana has been producing cars under this brand since the mid-90s. In 1994, a prototype of a sedan was created. Today the Ghanaian car industry produces powerful off-road vehicles and compact sedans, as well as environmentally friendly electric cars.

The Kantanka Amoanimaa has massive body panels and high ground clearance. Its design is reminiscent of the Toyota LC Prado. As the power unit in Kantanka Amoanimaa is used four-cylinder 1.5 liter atmospheric engine with an output of 102 hp. It is combined with an automatic five-speed transmission.

In addition, Ghana is ready to offer consumers the following models of the “star” brand:

Almost every Kantanka has Asian roots.

In 2012, Kenyan automakers created the $10,000 Two SUV. The unpretentious body is made on the basis of a tubular frame. The suspension can be called a spring suspension only partially, as it has springs only in the front. The light all-terrain vehicle is equipped with Toyota engine of 1.6 liter, 86 hp. The manufacturers have simplified the design to the maximum, saving even on the windows.

Capacity of Mobius Motors SUV is eight people. The project was financed by a private investment company PanAfrican. The model is produced in small numbers. In two years, it is planned to create a new, more modern model under the brand Mobius Motors.

SUV Two has also undergone modernization. Tubular architecture remained, but the body of the model was updated, power steering was installed, the windows were glazed, and the interior was made more comfortable and attractive.

There are two versions on the company’s website: a redesigned second and a completely new third. But the third model was not fully developed in Kenya. Chinese all-terrain vehicle Beijing BJ40 was taken as a basis. In this respect the Kenyan car industry has not gone far from the Nigerian model.

Thus, you can build a Uri vehicle for everyday use or for agricultural purposes. On the company’s website you can find special configurations of Uri:

In a custom design, the frame construction is equipped with the necessary number of seats, and the protection of windows is provided. Also includes a tent on the roof and other necessary elements