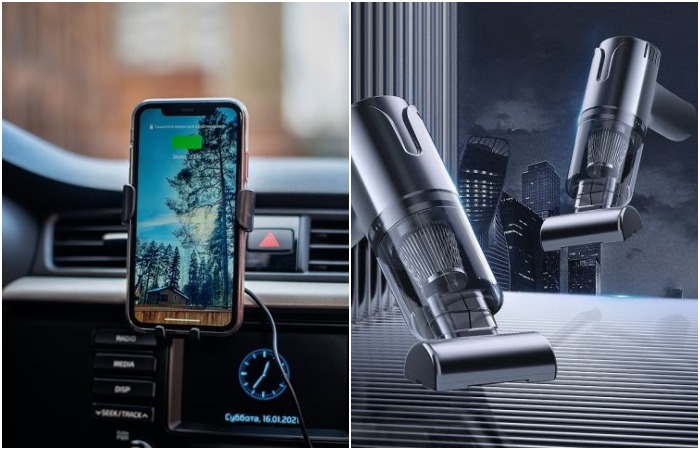 Perhaps each of us is facing the problem of choosing a New Year’s gift. But we do not want to repeat ourselves or give something trivial. The gadget market can help, which has been evolving by leaps and bounds for more than a year. Technological innovations are of great service and in the case when the present is sought for the motorist: they will not only be trendy, but also practically useful. To your attention “five” gadgets that will be an excellent New Year’s gift for the motorist.

A great addition to the rearview camera, especially if you do not want to install an additional screen. Mirror with built-in display not only saves space in the cabin, because the interior is virtually unchanged, but also allows the driver not to make unnecessary movements to view the record – it is enough to glance up.

Perhaps now there is no car owner who does not have at hand a smartphone. But not everyone can place it as conveniently as possible. But the market of modern gadgets solved this problem: just buy a holder with wireless charger. Such a gift will allow the driver not only to keep your phone close, but also to charge it. Therefore, even if the road is long, you can not worry that the gadget will run down at the most inopportune moment.

Sometimes the process of starting a car engine can be accompanied by problems, especially if the battery is not new or the weather is cold. Then a portable starting-charging device can be a way out of the situation. In addition, it can perform two functions at once: not only will help to start the car, but it can also be used as a normal external battery for electronics.

But conventional chargers should also not be forgotten as potential New Year’s presents for the car enthusiast. Especially since today’s gadgets are much more functional than their past counterparts, and also have a fast charging function. Especially such a modification will suit those who are used to or have the need to constantly carry a standard charger with a wire.

Keeping your car clean is an important part of its operation. And if you have to go to a car wash to get rid of dirt from the outside, keeping the interior clean is a much easier task. Especially if the driver has a compact portable vacuum cleaner. Such a gift will save a lot of money on constant cleaning of the cabin at the car wash, and the time will be spent on cleaning much less, because modern gadgets make small, but powerful.