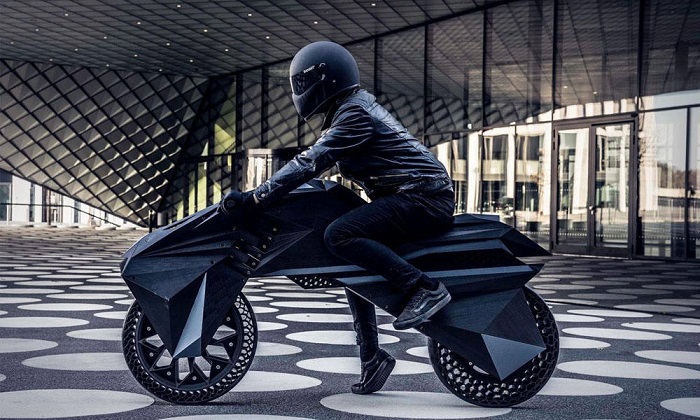 Motorcycles, although appeared quite a long time ago, but their design and, accordingly, the peculiarities of appearance have also become stable. However, this does not prevent individual creators to design and implement such concepts of bikes, which can rightly be called non-standard. Unusual design, strange constructive solutions or features of the operation – all this makes the bike non-trivial and even unique. Here are seven motorcycles, which differ sharply from traditional counterparts.

This unusual bike, which looks like an unfinished vehicle without some external elements, or a huge metal construction set, was created by Curtiss Motorcycles. By the way, originally, since its opening in 1991, it was called Confederate Motor Company, and was renamed, oddly enough, for political reasons, only in 2017. Today, the Rennaisance Fighter model can be purchased by pre-order – its cost is about $110,000.

Probably one of the most famous models of custom motorcycle is this, as it is often called, a hybrid of a sofa and a spaceship. After the Yamaha Maxam 3000 was released on the market in 2005, the attitude to it was mixed, but did not leave anyone indifferent. The model is still in production today, but it is sold exclusively in a few Asian markets at this stage.

This remarkable motorcycle has a funny design history. Thus, it originated from the car model Chevrolet Bel Air. But few people know that this design had a motorcycle version, which became known on the market as Ness-Stalgic. But the number of such bikes was so limited, that today you can see this bike only in private collections at a fabulous price.

One of the most modern examples of a motorcycle with unconventional design, which, perhaps, it would be fair to call the model of the future. Moreover, we are talking not only about the futuristic design, but about the way of its production, because it is made entirely with the use of 3D-printer. The Uno is not yet available on order, but the developers promise that in the near future, the model will be launched into mass production.

An unusual design solution for a motorcycle is to place the wheels not in a single line one after the other but in a row, actually putting them on one axle. It would seem that it makes no sense to mass-produce and sell such a model, because it is too non-standard transport. However, despite some potential fear of buyers not to keep the balance or lose control of the motorcycle, it is quite actively sold and in demand.