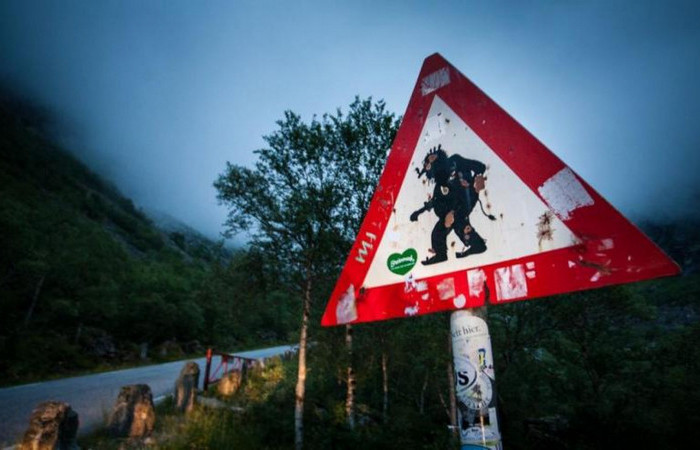 The rules of the road, and with it the road signs in all countries are more or less the same. But there are certain local peculiarities. In some countries there are frankly strange road signs that probably will not be very clear to our brother.

“Watch out for the waiters!”

Such road signs can be seen in cities in the Netherlands. As a rule, they are put on the narrow streets of the old part of town. It denotes, oddly enough, moving in this place waiters of cafes and restaurants. Employees can deliver food to customers, including those sitting on opposite sides of the street. The sign is primarily intended for cyclists and motorcyclists but also applies to motorists.

“Watch out for sleds!”

Road sign designed for motorists and motorcyclists. You can see it on the roads of Greenland. The sign reminds of the fact that the highway can be crossed by a sled with a dog sled. In those places, such “incidents” are not uncommon.

“Watch out for trolls!”

A humorous warning sign along Norwegian roads to remind motorists that they must always pay extra attention on the road. Trolls are a malevolent character in local folklore. Therefore, the sign as if to warn the driver that a collision with the “evil force” always occurs unexpectedly if you lose vigilance.

“The truck gets stuck.”

A sign, which occurs mainly in the UK and warns that vehicles with a trailer may get stuck due to the peculiarities of the road surface. It is also often seen in front of humpback bridges or railroad crossings.

Sign with the Latin inscription “BUMP” is used mainly in English-speaking countries. It is only needed to warn the motorist or motorcyclist on the approach to the section with the speed hump. Sometimes one or more bumps are also drawn on the sign.