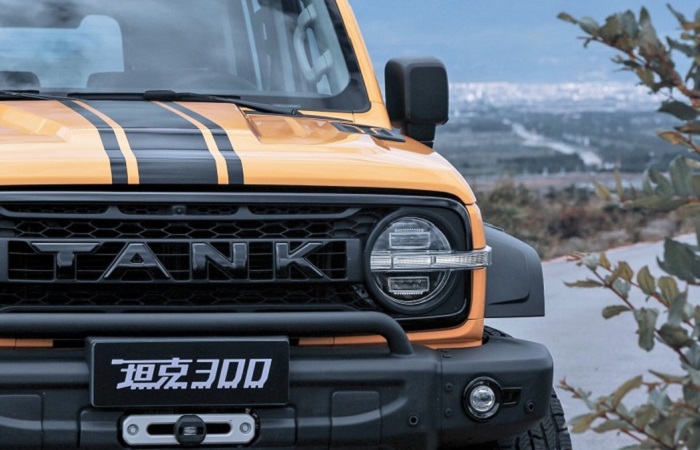 Today, the Chinese car industry pleases with stylish and high-quality novelties. And there is a lot to admire! Let’s see what we are offered in 2022. These cars will flood the roads very soon!

The Tank models are already exported to Saudi Arabia. They are simply designated with indices: 300, 400, 500, 700, 800. Accordingly, the Tank 300 is the most compact and cheapest vehicle in the range, and the Tank 800 is the largest and most expensive. But only two of them have been put into production so far.

Initially, this model came out under the Wey brand, but very soon Tank became an independent brand. From the front and from the side the truck reminds Haval Dargo, but does not compete with it.

Under the hood of the car there is a 2-liter turbocharged engine with an output of 227 hp, which is driven by an eight-speed automatic transmission. There are two screens under the common glass in the dashboard. With this, as well as with the turbine baffles, the Tank 300 dashboard is similar to Mercedes. Actually, the truck can completely replace German “Gelendvagens” on our roads.

This model is still in the status of a concept. This is a frame SUV with a brutal design, characterized by lots of broken lines. Instruments also look original, and each of them is located in a separate “well”.

In terms of dimensions the Tank 400 is close to the next model, so most likely the power units will be the same.

This model is similar in length to the Japanese Prado. A 3.0-liter, 354-horsepower six-cylinder engine is mounted longitudinally on the frame, paired to an 11-speed automatic transmission.

All-wheel drive has locks on both interwheel differentials. The serious Tank 500 also boasts a luxurious interior.

This vehicle made its debut in 2021 at the auto show in Shanghai. All-wheel drive all-terrain vehicle with a resounding name Tank 700 has a very impressive exterior. Suspension is all-round independent, power plant – two or three-liter turbo engine and a whole set of differential locks. It is an excellent variant for off-road!

This monster has received the tacit name “the murderer of Lexus”. A year ago, the Tank 800 had a status of a concept car. The two-colored body of the model reminds Maybach. Chrome-plated grille looks like borrowed from Rolls-Royce and the profile – from all-terrain vehicle Cullinan.

But the eighth “Tank” definitely has its own, so it has an interior trimmed with velvet, which makes it resemble a jewelry box. In general, the truck turned out bright and showy.

Automaker Changan also has sub-brands, and Shenlan is one of them. The presentation of electrified liftback Shenlan took place at the end of May. This is a joint brainchild of Changan, IT giant Huawei and battery manufacturer CATL.

The base version has a 218-horsepower electric motor paired with a 1.5-liter internal combustion engine, which is responsible for charging the traction battery. There are all-electric versions. The battery of one of them provides a range of 515 km, and the second – 705 km. At least, that’s what the manufacturer claims.

The top version Shenlan SL03 is a car that runs on hydrogen. It has an electric motor on the rear axle, and the energy comes from a hydrogen electrochemical generator.

It is worth considering a second-generation business sedan Hongqi H5. This four-door car costs about 159,800-225,800 yuan in the domestic market.

The car is about five meters long. The exterior is decorated modern and rich: a lot of chrome elements, “sweeping” rear optics and expressive front end. The interior also keeps up: there is a huge “portrait” screen, which connects to the multimedia system.

As we see, the model pretends to the very solid status. But, despite of it, it can’t brag of powerful power-units. There are three of them in the lineup:

Of course, AMG Hongqi is still far away, but cars of this brand are quite decent.

The cute 4.4-meter car was brought to familiarize car enthusiasts with its design and technical characteristics, as well as to study the demand. In the first photos on the Internet, the model was presented with tinted windows.

And in China, the Chery Omoda 5 parkettik was shown in the fall of 2021 at the auto show in Guangzhou, so we have an idea of it. In terms of dimensions, the Omoda 5 resembles the Tiggo 5. The chassis has an independent rear suspension, the car has front-wheel drive. Under the hood there is a turbocharged 1.6 liter engine with a capacity of 197 hp. Seven-speed robotized transmission controls the movement.

The interior has twin monitors of multimedia and dashboard with diagonal 12,3 inches, high central tunnel, three-spoke steering wheel and front seats made in sports design. But this can be seen in the “spy” photos.

It is said that for Europe, Chery will produce the Omoda 5 with a different architecture of the center tunnel and front panel, as well as differently located buttons.