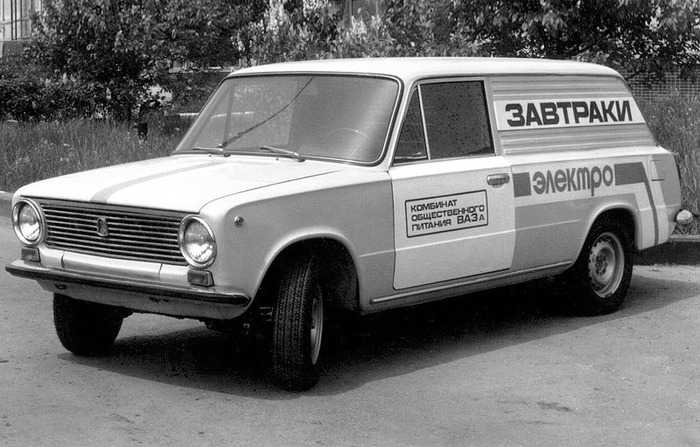 Electric cars are perceived by most of us rather as a new trend in automotive engineering. However, in fact, this is not the case: in the past they have repeatedly tried to popularize them, but nothing good came of it. Here is an “eight” of Soviet VAZ electric cars, the existence of which for many will be a surprise.

The first fully developed model of an electric car at AvtoVAZ. It was based on another similar car, the VAZ-E11011 “Autoroller”. It was a beach buggy, and was created back in 1970, but remained at the prototype level. The main modernization of the car was the installation of an electric motor. Tests of the running model proved successful, after which the engineers of VAZ, getting a hand on this model, began to create a full-fledged electric car.

This car was developed in parallel with the Electroller. In fact, it is a serial station wagon VAZ-2102, which was modernized with an electric drive. Totally there were created two copies. The design of the car was not very convenient, because most of the body was occupied by batteries. However, this did not prevent their successful use for transportation of mail in the city test program.

This light electric car was originally conceived as a transport for use within the Olympic Park during the Games in Moscow, or for example VDNKh. But only by the beginning of the “Olympics-80” engineers did not have time to complete the car, which was the reason for the further closure of the project. Moreover, for a while this concept was abandoned, and the engineers concentrated on the creation of electric vehicles for the national economy.

Attempts to create cars for the national economy resulted, in particular, in creation of a delivery van VAZ-2802-01. And this particular car was not the result of state order, but personal initiative of several VAZ engineers. By the way, in its development were used elements of the aforementioned VAZ-1801. Car had a payload of 450 kilograms, and its other technical characteristics even allowed to talk about putting it into production. However, for unknown reasons it never happened.

VAZ engineers decided not to stop at one van, so they created the second modification. The development of this car was done by a group of young engineers under the leadership of Mikhail Markiev. The car created a real furore at the Avtoprom-84 exhibition, and also added 14 gold medals to the list of AvtoVAZ awards. But all these successes didn’t help it to get the ticket to life – the serial production of this car never got started.

Unlike the aforementioned models, VAZ-2801 still ended up on the assembly line. This car was a van on the chassis of VAZ-2102, and according to Novate.ru editorial data 47 copies were made. They were used in three cities of USSR: Zaporozhye, Kiev and Simferopol. But in the end, production was not expanded further and to this day we know about only two surviving vehicles, and there is information that they were removed from the electrical equipment and replaced by conventional engines. Both are owned by Ukrainian private collectors.

And again a car with the nickname “Pony”. It was an electric car designed for children. The concept was well appreciated and had a good potential: in particular, it won first place in the All-Union competition for the creation of new samples of technical games and toys and items for technical creativity of children and teenagers. However, on the way of putting the toy into production was its cost price, which proved to be too high.

After VAZ-2801 VAZ engineers did not stop in their desire to create an electric car, and as a result, a delivery van VAZ-2702 has been developed. But this model turned out to be very unsuccessful, in particular, in the matter of safety. The thing is that the car body was aluminum, and deformed quite quickly. Moreover, in order to test it, there was even a crash-test, which was a real rarity in the Soviet car industry. As a result, after the first impact, the car turned almost into a pile of metal.