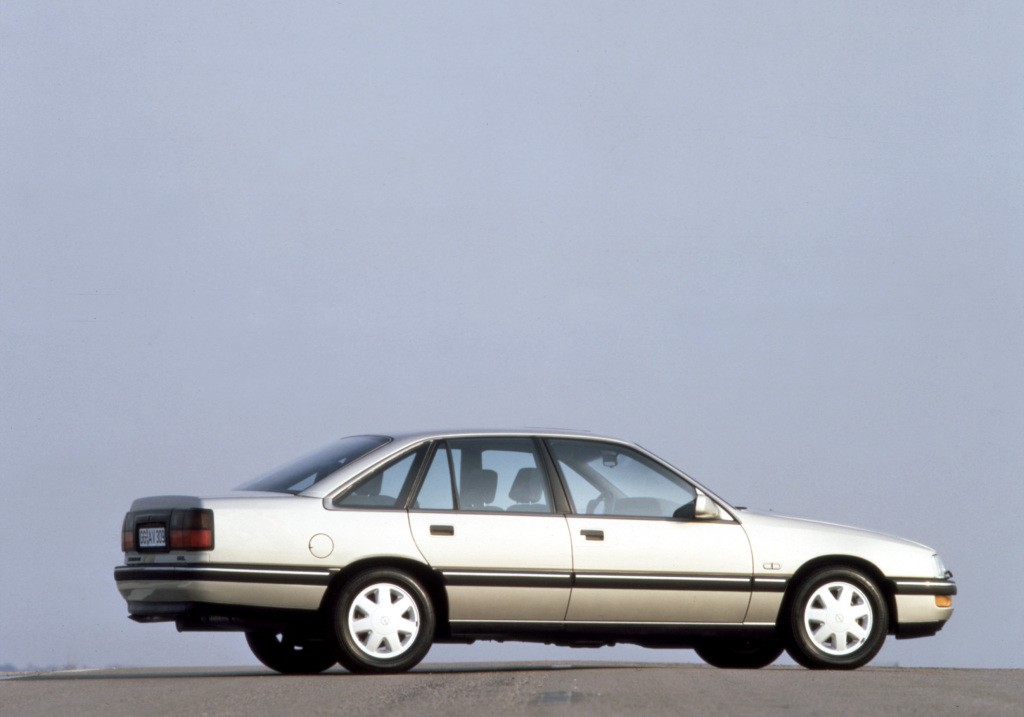 MYTH 1: “Super Omega” appeared because of the ambition and personal support of Opel’s top managers

By the mid-eighties, after a series of failures and financial turmoil, the position of Britain’s oldest sports car manufacturer Lotus became so unenviable, that the interest of the largest U.S. car concern GM looked like a real salvation. By that time, the founder and head of the company, Colin Chapman, had already died, but the chairman of the board of directors, Bob Eaton, was both a great admirer of Chapman and a connoisseur of British sports cars.

After the acquisition of the Lotus brand together with its production assets, Eaton and one of the Lotus directors Mike Kimberly had an interesting idea: to create a sedan based on the flagship Senator model, which would combine the dynamics of a sports car with the comfort of an ordinary business class passenger car.

GM and Lotus bosses came up with this idea back in 1986, but then the project was frozen, and they returned to it only two years later, and instead of the original idea to make a “charged” Senator, it was decided to take the Omega model as the source.

Obviously, Detroit was well aware that Munich and Stuttgart were working on special versions of the new Five and E-Class, respectively. Opel had already gained a reputation for giving sedentary people “a lot of car for their money”. Bob Eaton conceived a rather daring “game on someone else’s field” – at least where Opel had not played before. That’s why Lotus Omega owes its appearance not to marketers, but to one of the bosses of the overseas concern, which included both Opel and Lotus.

The concept was correct: the prototype differed from a small-series car only in details.

MYTH 2: The car was based on aggregates of Lotus.

Having seen on a photo the Omega of the first generation with the developed aerodynamic dodger and inflated wheel arches, many attentive motorists have noticed someone else’s nameplates on the car.

Very modest-looking, but the emblems and Lotus lettering hinted that this is not quite an Omega A. More precisely, not at all

In addition, the unheard of, by the standards of this model, maximum engine power (almost 400 “horses”) has generated rumors that Opel simply “transplanted a heart”, installing under a long hood of sedan the power unit from Lotus sports cars.

In reality, the fast Opel appeared almost by the same recipe, which is implemented by many domestic tuners, at home by installing a supercharger on the usual atmospheric “hex valve” their “ten” or Prior. Taking as a basis a standard Opel in-line “six” C30SE, developing 24-valve head 204 hp, the specialists of Lotus, which were responsible for engineering the project, increased the working volume from 2969 to 3615 “cubes.

In other words, the German-English sedan has caught up with the Bavarian “Emka” in terms of its liter. But the British engineers did not limit themselves to boring of the engine, but in addition equipped it with a pair of Garrett T25 turbines.

They gave out 0.7 bar already from 1500 rpm, which allowed squeezing out of the three-liter “six” almost twice more “horsepower” than it was originally intended – and more precisely, 377 hp. Of course, this required strengthening the cylinder block and crankshaft, as well as the use of forged pistons and lowering the compression ratio to 8.2:1.

The British used the fact that GM had a lot of powerful cars of different brands, which were produced on different continents. Thus, the six-speed mechanical ZF was borrowed from Chevrolet Corvette ZR1, and the limited slip differential was taken from Australian Holden Commodore V8.

Suspensions were thoroughly lowered and squeezed, equipping the rear with the automatic clearance support system from the Senator sedan, which shared its power steering with the new model as well.

Lotus Omega with British sports cars were united only by two details: multi-point injection from the Esprit model, as well as Goodyear Eagle tires, which were specially designed for German-English sedan, but were installed on the Lotus Esprit Turbo SE.

Contrary to popular belief, the engines in the Omega and the Esprit coupe were different, but the power system and tires were the same.

Fast Opel was not simply fast but record-breaking in its class, because this car, unremarkable at first sight, had better dynamic characteristics than a Volchok and an Emka! Many people simply refused to believe that some Omega could go faster than BMW M5 or “Five Hundred” with its V-shaped five-liter “eight”.

The third one is not superfluous: the product of German-English collaboration could put a fat point in a dispute “who is cooler”, surpassing in dynamics both “Emka”, and five-hundredth

Some dry numbers: besides 377 “horses” Lotus Omega could boast an impressive torque of 568 Nm at 4200 rpm, the most part of which (475 Nm) was available almost immediately after a couple of Garrett turbines started working. Such traction with the explosive turbocharacter allowed the car devoid of any electronic “collars” accelerate to unthinkable for the competitors 282 km / h!

Well, acceleration to the first hundred took only 4.8 seconds. For comparison: “Five” depending on release year and engine capacity (3,6 or 3,8 liters) could gain hundred in 5,7-6,3 seconds, and “Five hundred” equipped with a four-graded automatic system reached this figure for 6,1 seconds.

In other words, neither Bavarian, nor Stuttgart sedans had practically no chances against “Super Opel” – certainly, provided that the driver behind a wheel will be experienced enough, and traction of wide rear tires (265/40 ZR17) with road will be sufficient.

By the way, front and rear seventeen-inch wheels of Lotus Omega were different in width – if in front on 8.5-inch disks of Ronal there were 235 mm wide tires, in the rear – 265 mm wide, put on 9.5Jx17 disks.

MYTH 4: The car was produced in Germany.

Due to the fact that outwardly a sports Omega differed minimally from the base car, many people thought that this car was produced in German city Rüsselheim, the native city for Opel brand. However, as in the case of the “five hundredth” Mercedes, the first “home” stage was the creation of the body. In the case of Opel, the future billets of super-sedans in the form of finished cars were then moved to the county of Norfolk, where the Lotus factory was located.

This is where the engineering transformation of former “cars for pensioners” into real monsters, capable of fraying the nerves and giving heat to the owners of not only charged sedans, but even many supercars of the time took place. The body differed from the original not only by increased rigidity – the engineers of Lotus needed to increase the transmission tunnel, so that it could accommodate the “Corvette” gearbox.

The cars were first disassembled to the ground, and then assembled in England practically on slipways using the same technology as is used in the production of small-scale cars like executive limousines – that is, virtually by hand.

The way from Opel to Lotus was not simple and quick, and in the process, the initial Omega became three times more expensive!

MYTH 5: Opel Lotus Omega was not inferior to the German big three by its equipment.

Interesting detail: all cars built in Norfolk were painted Imperial Green, a shade that refers connoisseurs to the famous British Racing Green.

The equipment package was also the only and the most rich for Opel Omega A. Don’t smile ironically: by putting together in a dark green body all the options available for the Omega, the manufacturer managed to create not only an incredibly fast, but also quite comfortable car. Electric windshields, mirrors and door locks, power sunroof, heated seats, sound system and air conditioning allowed the owners of a difficult Opel not to feel like poor cousins in comparison with the owners of “emkeys” and “five hundredths”.

And to make the interior of the car looked exactly in line with the ambitions of the creators and expectations of potential buyers, the seats Recaro was trimmed with English leather Connolly, and on the floor there were mats Wilton.

However, due to the fact that the on-board computer could not be paired with the new “brain” of the engine, instead of it on the console there was an ordinary clock. But the speedometer marked up to 300 km/h made us think that it is not usual three-liter Omega 3000. Well, for those who did not understand it at all, a plate with a serial number of a concrete sample was placed in the interior.

MYTH 6: this unusual sedan was originally intended to be produced in very small numbers, that’s why they made so few of them.

A MYTH AND A TRUTH

Unlike the “charged” versions of BMW E34 and W124, which numbered thousands of copies, Lotus Omega was conceived as an exclusive and, therefore, a one-off product. Production started only in 1990 – that is, after the M5 and 500E, and the base Omega had already been produced for four years by that time and had long ceased to be a novelty. Probably, the formed image of the basic model in combination with the high price (about 48 thousand pounds in England) in conjunction with the specific handling and did not allow the unusual sedan to justify the expectations of the creators.

The nearly 400 horsepower combined with rear-wheel drive required a lot of driving skill, and in Germany, a separate license was required to drive it.

Because of the impressive power and rear-wheel drive, the supercharged sedan was not at all easy to drive.

Of the 1,100 cars that GM had originally planned to produce and sell, only 950 were sold in two years, of which 620 were called Omega and 320 were called Carlton.

Assembly of the cars due to unprofitability had to be stopped in December of 1992, when the Lotus Omega became a part of history forever. However, in the case of this car the market success did not matter much – the project was rather of image character, and in its basis, as we already know, was the interest and ambition of one of General Motors executives, thanks to which a multi-door and modest-looking Opel could become a real Lotus, built according to the Colin Chapman’s legacy.