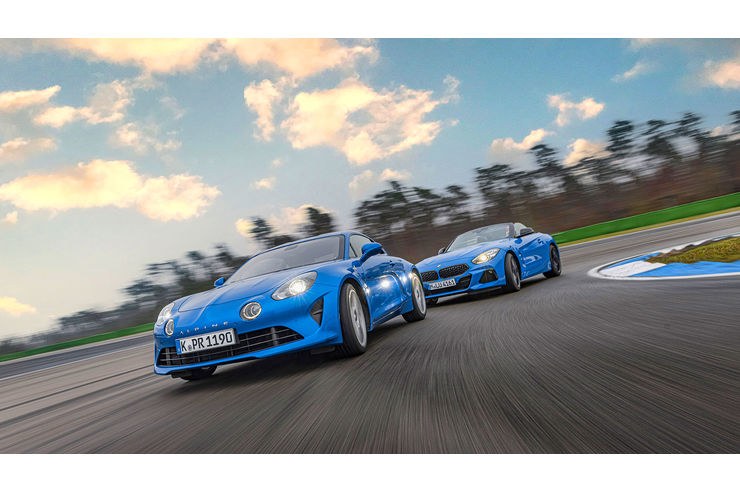 What is this all about? A comparison test of coupé against roadster? Are they completely crazy at auto motor und sport? Sometimes, yes, but not now. Because the comparison with the Toyota GR Supra 2.0 seemed a little too obvious to us. And the one with two rather different concepts – mid-engine coupé here, front-engine roadster there – as more appealing. Because these two have a clear focus: driving pleasure! Especially since Alpine and BMW are in the same league in terms of price. And quite apart from that, BMW and Toyota are known to have a very close relationship. So if you want, you can make one or two deductions. But we don’t want to. So here goes.

Yes, the Alpine not only beguiles with its retro charm, it is an opponent to be taken seriously. After all, on its debut it beat a certain Porsche Cayman in a comparison test. Like the Cayman, the A110 is a classic mid-engine sports car. Built for exactly one purpose: driving.

While the Z4 comes with countless modes, the Alpine only needs a red sports button on the steering wheel – behind which two escalation levels are hidden. A short press sharpens the steering, sharpens the shift speed and throttle response, loosens the ESP and opens the exhaust flap. A long press then unleashes it completely.

That doesn’t just sound sporty – it’s great sport. Because the Alpine A110 is a lightweight athlete, in the truest sense of the word. Weighing just 1,113 kg, it balances out with a slight tail weight (57 percent). You almost feel lost in its sinewy body on the wide Grand Prix track. But the Alpine doesn’t leave you alone. It doesn’t regard ideal lines as a fixed course anyway. Rather, she sees them as a pole around which she wraps her slender body. And does things to and with it that would never be conceivable for the 1,516 kg fat topless BMW.

Nevertheless, it hardly shows any mid-engine airs and graces. Whereas with the front-engined Z4 you have to be constantly on your guard against the oversteering rear axle, the Alpine A110 announces the rear with the lead time of a rocket countdown. Once it is transverse, it can be caught at will. Also because its steering is poetry. In fact, there’s something almost lyrical about the way it recites every little bump in the road right down to its fingertips. While the BMW makes you believe that the Hockenheimring is perfectly flat.

Unfortunately, the fun of rhyming is quickly lost on desolate country roads. Because when it comes to potholes and ruts, it lacks the right rhyme. Here, the adaptive dampers in the test car seem noticeably firmer than we were used to in the first A110 models – one of which led us through half of France without a slipped disc. The French owe us no conclusive explanation. They simply say that the standard suspension is set for more stability at top speed.

Well, the small coupé doesn’t really feel stable on fast motorway stretches. But it is not quite as hard as it reads at first glance. However, it does lose some of its youthful innocence. It compensates for this with the central tailpipe of the 1,488-euro flap system. In “sport” mode, the engine sputters and pops so much that you could easily believe that half of the fuel in the 9.8 litres (BMW 10.6 litres) recorded here was used for the artificially generated misfires alone.

Such adolescent traits are far removed from the four-cylinder engine in the Z4, which even in “Sport Plus” only plops cautiously out of the blackened tailpipes. In general, its 2.0-litre turbo engine sounds comparatively stodgy, even when the full 258 hp is available at 5,000 rpm. Fortunately, it is drowned out by the Harman Kardon sound system, which costs only 400 euros, or by the wind that blows around your ears without the wind deflector suspended between the roll bars. 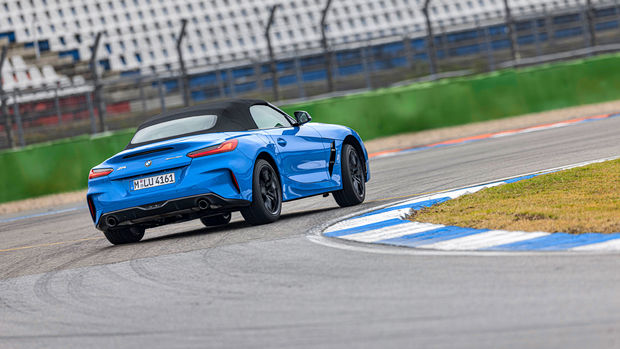 A full 400 Nm of torque is available from 1,550 rpm. This means that in the standard sprint to 100 km/h in 5.4 seconds, the much heavier Roadster is only just beaten by the Coupé (5.0 s). No doubt also because BMW strapped high-grip Michelin Pilot Super Sport tyres to the test car. In addition, the ZF eight-speed automatic in “S” position is clearly more on its toes than the slightly sleepy seven-speed dual clutch. The torque converter in the BMW even allows the driver higher revs in manual mode and then holds the gears consistently.

But all these tricks are of no help at higher speeds, because up to two hundred km/h the Alpine A110, whose high-revving 1.8-litre engine produces 252 hp and 320 Nm, is well ahead – by almost five seconds.

It should also be noted that the BMW always comes to a halt earlier in the braking measurements. The Alpine also decelerates at a good level, but only achieves this with the high-performance brake option for 1,000 euros, which includes larger brake discs with 320 instead of 296 millimetres.

Less stable than the BMW’s deceleration performance: its handling, although it is quite entertaining. Its rear axle is always ready to dance, enabling fun drifts at any time thanks to the optional limited slip differential (1,400 euros). On a closed track, this is great fun, with the run-off zones compensating for the narrow limit range. In everyday driving, however, the driver may be surprised when the grip of the sports tyres suddenly breaks down at low outside temperatures despite active traction control – and we’re not talking about winter.

Apart from that, the Bavarian, with its tightly tuned adaptive M suspension for 600 euros, feels incredibly firm on the asphalt. Thanks to the almost perfectly balanced weight (49.7 : 50.3 %), it even avoids the cones in the 18-metre slalom and the double lane change a little faster than the Alpine. Always provided you choose the right driving mode. The BMW offers almost too many customisation options, which do not always have a positive effect on the driving behaviour: the transmission jerks in Comfort mode when driving at low speeds. And in Sport, the steering, which is precise in itself, responds too briskly at high speeds and also reports too little information back from the optional 19-inch wheels.

A lot of feeling for the road is lost. In general, the Roadster seems almost too wide for winding, narrow country roads. It is almost seven centimetres wider than the A110 and takes up a total of eight square metres of traffic space. On the other hand, it allows the driver to take a deep breath and cruise along in eco mode. 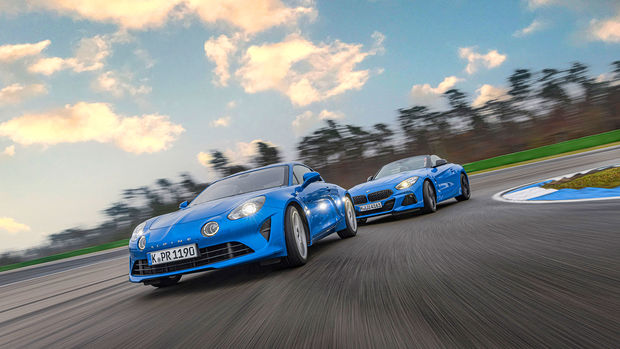 As you can see, the BMW always tries to please everyone. It likes to mimic the perfect roadster, also by concealing the concept-related shortcomings as far as possible. This starts with the controls: Whether by touch, turn and press or simply by words – the infotainment accepts commands of all kinds and implements them precisely. In addition, BMW offers comprehensive safety and comfort assistance at a considerable extra cost. Which explains the immense points lead in these chapters.

The Roadster pampers the driver with heated steering wheel and heated integral seat, which electrically adapts to the body and not vice versa. And thanks to Isofix, the passenger seat can even hold a child seat – try that in the Alpine. Even the boot, at 281 litres, can hold a weekend’s shopping. What’s more, the volume doesn’t shrink when the soft top folds into the box above it within ten seconds at speed 50.

Speaking of folding: That’s exactly what you have to do when you climb into the A110. Because of the tightly cut sports seats, your own body mass index should not be too far north of the ideal value. Tall people also need tools to lower the leather seats one notch. Otherwise, the well-arranged cabin is clad in soft leather, Alcantara and elements painted in the 1,785-euro Bleu Alpine exterior colour.

Space in the mid-engined sports car is also very limited. Daily belongings such as wallets and smartphones can barely fit in the narrow centre console due to the lack of a glove compartment and door pockets. The cup holder, which is too small, can only be reached with undignified contortions. And if you open the luggage compartments, you quickly realise that there is no room for much more than a beauty case or sports bag in either the front or the back. But the Alpine overplays this with French charm. This is evident not only in the digital displays, which glow in the colours of the tricolour just like the automatic buttons, but also in the fussy infotainment controls.

Yes, on the other hand the Z4 is surprisingly suitable for everyday use for a two-seater and with a test car price of 59,800 euros (including extras relevant to the assessment) even slightly cheaper than the 61,621 euro A110. However, this does not alter the Alpine’s superiority in terms of driving pleasure.

The many strengths of the Z4 are matched by hardly any weaknesses. Despite noticeably more mass, the roadster is not only fun to drive openly. It is also cheaper.

Hardly any space, little assistance and a sparse multimedia offer may be weaknesses in the test. But one strength outshines everything: driving pleasure! That’s why you buy an A110.