Aptera is back and the first batch of the three-wheeled electric vehicle is sold out – but not yet on the road. Its solar-generated range is impressive.

Aptera had its first phase of life from 2005 until it went bankrupt in 2011 – the streamlined electric tricycle attracted attention but apparently failed to find enough investors. Then in 2019 came the second attempt with a revised model that can generate additional energy via solar panels. Now, customer interest is so high that the first production batch of 330 cars sold out after just 24 hours, according to the Washington Post. 7,500 more customers have already placed an order, Aptera is pleased to report.

With an entry price of 25,900 dollars (currently around 21,561 euros), the Aptera EV is comparatively inexpensive.

However, not a single Aptera EV is on the road as a production vehicle yet – deliveries are yet to begin. But the announced capabilities of one of the most efficient electric cars on the market have apparently convinced many prospective buyers. The two-seater is said to be capable of speeds of up to 177 km/h (177 mph) and to sprint from zero to 97 km/h (60 miles per hour) in 3.5 seconds. The efficiency figures are even more impressive: on a clear sunny day, the solar cells are said to supply energy for a range of over 60 kilometers – a battery charge is even said to be capable of driving 1,600 kilometers. 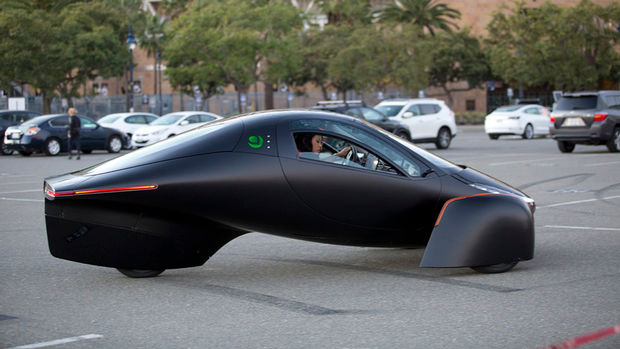 Due to its streamlined shape, the Aptera EV is very efficient.

The price for the Aptera EV seems reasonable in view of the driving and range figures: the eye-catching vehicle is expected to cost 25,900 dollars (currently around 21,561 euros). 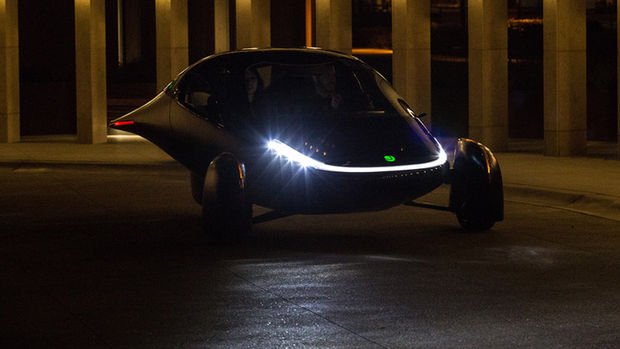 The Aptera EV is expected to travel up to 1,600 kilometers on one battery charge.

Prototype has been in testing for some time

When was the last time you talked to someone about electrically powered tricycles? Probably never. That may be changing now. The American start-up Aptera is planning a comeback with just such a vehicle. Back in 2009, the founders presented a prototype (2e, see picture gallery), for which they were even allowed to place pre-orders for a few hundred dollars. However, the vehicle never appeared. 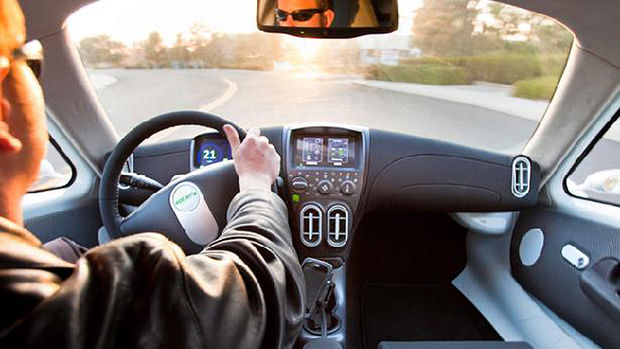 Less futuristic on the inside than on the outside: Aptera already presented a prototype called 2e in 2009. The new design is not yet that far advanced.Garnishing quirky concepts with immense performance data usually doesn’t necessarily pay off in terms of credibility. Nevertheless, Aptera has a new version of the 2e in its hypothetical quiver – and it’s supposed to boast an electric range of up to 1,600 kilometers. The three founders have set their sights on nothing less than the construction of the most efficient electric car in the world. The first renderings already show that they are at least serious about aerodynamic efficiency. As with the 2e, the design is based on nature – or more precisely, on the body of a bird.

To achieve their ambitious goals, the entrepreneurs are relying on the technical progress of the past ten years. And on the money of multiple investors – because the first three prototypes, which are planned for the coming year, will initially devour around 2.5 million dollars. Why several at once? The portfolio is to include different versions of the Vogel vehicle, with battery capacities ranging from 40 to 100 kWh. Another player in the assault on the range record is consistent lightweight construction. The version with the smallest battery should weigh no more than 800 kilograms.

I hardly think so.

Sure, they rock the thing.

But anyone who expects safety to be compromised is mistaken – hypothetically speaking. The passenger cell is supposed to be stronger than in any other car, despite the low production costs. That’s a lot of superlatives for a vehicle that only exists on the screen.

Where other manufacturers or startups design electric concepts that are particularly luxurious or extraordinarily powerful, Aptera focuses on features that actually move e-car enthusiasts forward. Lightweight construction and range optimization are certainly good approaches. But good approaches have also been taken by many who never put a car on the road afterward.

The combination of good driving values, a high range and an additional comparatively high solar range with a low price has now triggered a run on the Aptera EV. The sell-out of 330 units within 24 hours is a good sign for investors – currently it looks like Aptera might actually make the leap to serious series production in its second attempt.