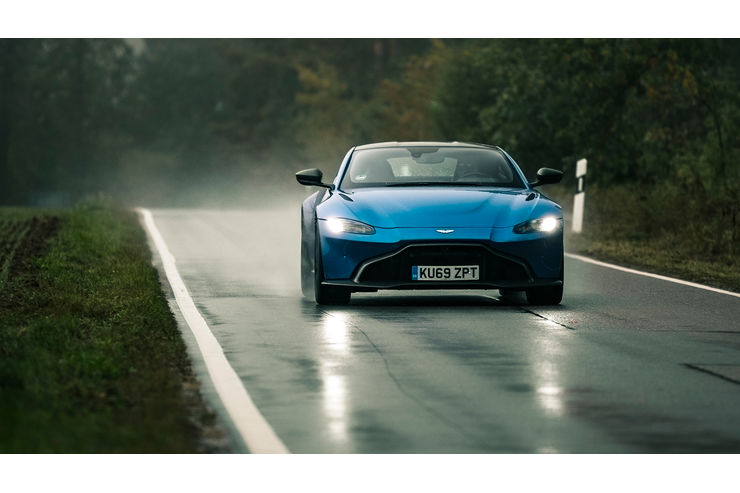 When the clutch comes in, a rush of revs shoots into the car and you register that, yes, crucifix, instead of fifth gear, you’ve got third again, which on top of that is squatting in the regular spot of second – then, yes then you know: The Vantage is who again. Him again! More precisely: He’s back in the role of the charming cross-head from which they had actually pulled him.

They are the ladies and gentlemen brand strategists who blew the whistle on a major image makeover at Aston Martin around four years ago. At that time, they wanted to get out of the beauty department overnight, wanted to catch up with the competition and, above all, wanted to move into the present day. Accordingly, a rigorous clean-out was carried out: Round clocks, glass keys, suction motors – everything that was art was suddenly junk.

The large DB models were able to cope with the fuss quite well. Their personality is strong, and despite turbocharging, the V12s are still charismatic enough to fly the flag. The Vantage, however, was shaken up by the upheaval – both conceptually and stylistically. Its beauty was suddenly no longer objective; it was in the eye of the beholder, which is almost a singular fate in more than 100 years of design history. And as if the look with the shy little eyes and the obscene butt weren’t burden enough, the transaxle coupe was also overtaken by an AMG engine and the rutting battle cries of its CEO (who has since been cut off), which – with all due respect – suited neither the brand’s style nor its driving dynamics capabilities.

One can only imagine how the poor guy must have felt during his presentation. He probably would have preferred to crawl back under the cloth that was torn from his body before the absurd job instruction. In the meantime, however, we know that the sports car world would have missed out on a lot without him. Because they can’t get out of their own skin at Aston; because they’ve managed to keep the Swabian ingredients from tasting like spaetzle with gravy; and because, despite the modernization mania, they don’t throw themselves at every trend.

This Vantage wants to excite the driver, to involve him, for which it has acquired a manual gearbox especially.

A wonderful example of this – shall we say – inner defensive force thunders through the foliage here. It costs around 150,000 euros, is limited to 200 units and answers to a, well, inappropriate epithet. AMR stands for “Aston Martin Racing,” which actually implies that this Vantage is oriented in the direction of racing, that it is a razor for tenths of a second. Or to stay in the ductus of the reformed Aston guidelines: the 911 GT3’s worst nightmare.

The reality, thankfully, looks different. Instead of chasing track records, it concentrates on entertainment, wants to excite and involve the driver, for which it has acquired a manual gearbox. The seven-speed transmission comes from Graziano, is now also available in the regular Vantage and is a minor sensation. Not because it is so cleanly guided or engages perfectly, because frankly it doesn’t do any of that. But because of the fact that it exists. Just think how other manufacturers squirm around this issue: Demand is so low, mimimi, the development effort is too high in proportion, mimimi. Aston, however, the puny store, gets it going!

And don’t think they’ve just left it at a terse transmission swap. No, the AMR pulls off the driver-focused stunt. The brake booster is specifically designed to meet the requirements of the hoe-sharpener, the E-lock has been dropped in favor of a purely mechanical, more reliably responsive solution; the rear axle has been given firmer stiffeners for more playfulness; even the engine adapts: To ensure a forceful start, the torque is reduced in the first two gears – a tad too far for our taste. 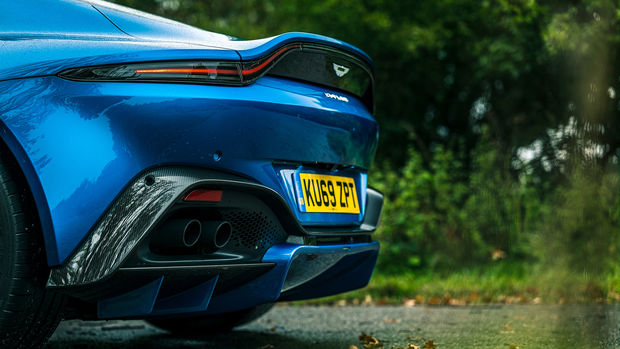 To protect the transmission internals, the AMR was shortened by 60 Nm compared with the automatic version. In return, it now weighs a measured 73 kilos less.

However, as soon as the third engine is plugged in, the four-liter unit is at full boost. Up to 625 Nm then rage through the drive channels and cram the 1,649 kilograms forward with corresponding fury. The gear connections fit just as perfectly as the gear ratios; intermediate gas jolts blend the drag torque; when clutching, the V8 automatically throttles back the load so that you can stay fully on the gas when shifting up. Ingenious!

Only the shifting scheme causes chaos. It follows the dogleg principle, so it angles the first gear down to the left so that the remaining six are in a straight line opposite each other. This sounds simple, but it always clashes with habit when a certain gear is needed in a hurry. Well, where is it, the fourth? Well? Huh? Exactly, up in the middle!

On a country road, this is not so bad, especially since the V8 quickly recovers if the shift arm slips in the gap. The Hockenheimring, however, became a brainteaser. The handling as such? Fabulous! The front axle drives itself into corners like a wedge, the rear axle generates traction when it should, or lateral drive when it shouldn’t. The shift lever, however, always took a wrong turn somewhere during the lap. As I said: Crucifix!

That the fiddling with the eyelets nevertheless worked out, we owe to a piece of tape, which made the gear indicator in the display harmless. You’ll laugh, but that’s when the knot in our heads burst, and driving according to misleading numbers turned into a game of positional intuition, which in the end even resulted in a bombshell time – as proof that the path to contemporary performance can sometimes also lead through tradition.

No, Aston Martin is simply already in too bad a shape.

The seven-speed transmission is by no means a masterpiece: the lanes are twisty, the detent is bristly, the shift feel brash. But it does restore the Vantage’s authenticity. Whitewashing? On the contrary! Thanks to the V8 mace, sensitive locking mechanism and a chassis trimmed for agility, the AMR even catches up with the competition. A first in model history!