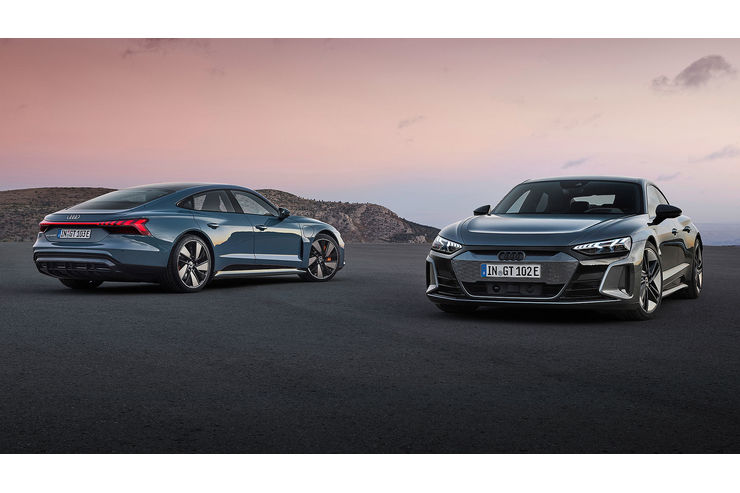 In the Volkswagen Group, the same technology is commonplace for different brands. The fact that 80 percent of all passenger cars built by Volkswagen worldwide use the Modular Transverse Toolkit (MQB) as their technical basis is what makes the Group profitable in the first place.In the upper vehicle classes, technical individualism is more pronounced. Admittedly, the Audi Q7/Q8, Bentley Bentayga, Lamborghini Urus and Porsche Cayenne are more or less on the same platform, and the Porsche Macan uses the underpinnings of the Audi Q5. But a Porsche Panamera and an Audi RS7 have as little in common as a Lamborghini Huracan has with the Porsche 911 or a Boxster with the TT.

The electric Audi RS7 is different – better in terms of synergies: Audi builds the E-Tron GT on the J1 plaform of the Porsche Taycan – powertrain, chassis hardware, floor assembly with 93 kWh battery (85 kWh net) including recesses called foot garages – all from the Porsche.

The recesses in the battery already create space for passengers’ feet in the Taycan,

Audi is happy about Porsche technology

Audi chief designer Marc Lichte expresses his heartfelt thanks: “Without this great platform, we wouldn’t have been able to make such a great car. The proportions are fantastic” – and are a dead ringer for the Porsche. Length 4.99 meters (2.7 centimeters more than the Porsche), width 1.96 meters, height only 1.41 meters (2.9 centimeters higher than the Taycan). According to Lichte, proportions are the most important thing when designing the outer skin. But that’s where the similarities to the Taycan end. The Audi only shares the windshield with the Porsche – even experts can’t confirm this with certainty after a thorough examination. But they can confirm that the rest of the car looks like an Audi.

The brand-typical headlights enclose an inverted single-frame grille and do not sit in the end of sculpted wheel arches. The hood between them is slightly concave curved inward instead of convex like the powerdome of an internal combustion car, but it doesn’t slope down like it does on the Taycan. The side line emphasizes the battery with a wedge-shaped sill area, and the rear wheel arches are much more extreme, almost obscenely muscular. At the rear, the outwardly widening light strip with vertical LED elements makes it clear that this is an Audi. 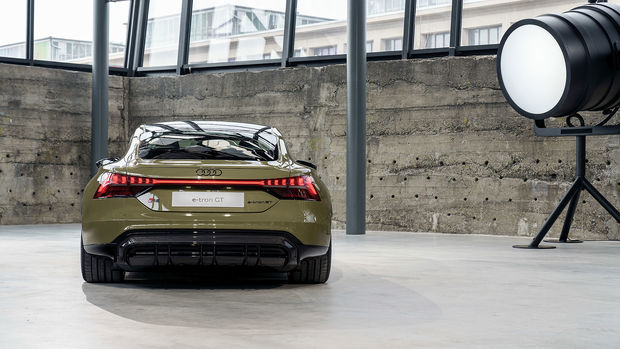 The thick cheeks at the rear of the RS E-Tron GT are reminiscent of the RS6.

The extremely thick cheeks at the rear are even more reminiscent of the RS6 than the RS7 with a similarly flat-sloping rear. Audi promptly introduces the E-Tron GT, the first electric RS model: The RS E-Tron GT acts as the top model. With 598 hp (646 hp peak power) and 830 Nm maximum torque, it dutifully sorts itself out below the Taycan Turbo (625/680 hp, 850 Nm). An equivalent to the Taycan Turbo S is actually ruled out with the RS designation. The RS E-Tron costs 138,200 euros (Taycan Turbo: 153,016 euros) and justifies its higher price compared to the entry-level Audi E-Tron GT Quattro with better standard equipment, which already includes air suspension, rear-axle steering, fully variable rear-axle cross-axle lock, carbon roof and carbide brake (special, non-rusting coating of the discs). 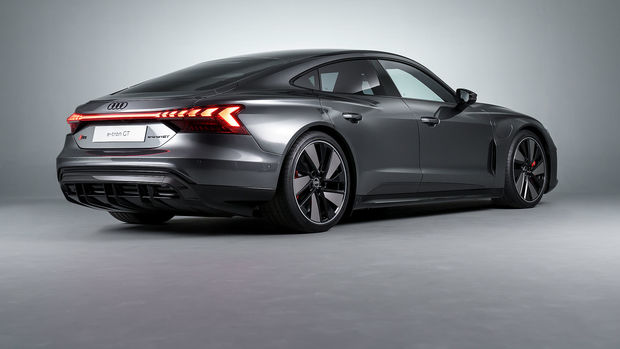 The RS E-Tron GT’s brake discs are carbide-coated as standard. 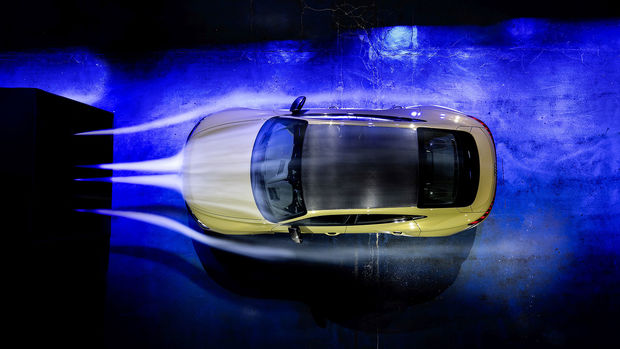 Audi put a lot of effort into the aerodynamics.

The Porsche Taycan 4S with heat pump (plus €773.50) achieves a maximum of 464 kilometers according to WLTP. This is surprising considering the air resistance, which is crucial for the range. Since the frontal area should hardly differ, the drag coefficient should have the biggest influence. Audi gives it as 0.24, Porsche as 0.22, for all models except the Turbo S (0.25), but in range mode at low level and with closed cooling air flaps. So there are still a few imponderables in there, but Audi can’t have done a worse job than Porsche when it comes to wind resistance, at least. That could fit the character of the cars: The Porsche is more of a four-door sports car, while the Audi is more of a touring Gran Turismo, which you should also feel when driving. Audi says it has placed a lot of emphasis on comfort. The E-Tron GT will be at the dealership in May 2021, when you can also test how the sound of the Audi differs from that of the Porsche.

Inside, only the space is the same as in the Porsche

There is also a lot of differentiation on the inside: In the Audi, the dashboard is designed three-dimensionally with quite a few depths, appears less flat than in the Porsche, and even the interior door panels are drawn in below the window sills, which converge toward the front and effectively take up the lines of the hood. According to Marc Lichte, the interior also has just one part in common with the Taycan: the trim of the B-pillar. In view of its mundane function, this should be even less noticeable than the windshield. 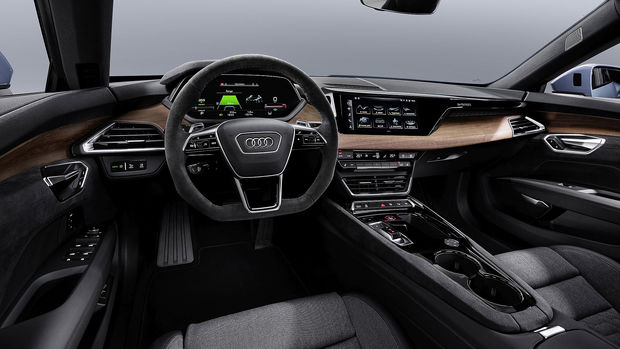 The interior of the E-Tron GT is also available leather-free.

The leather-free design package is likely to catch the eye. The seats are upholstered either in a combination of imitation leather and the fabric Kaskade or a mix of imitation leather and the microfiber material Dinamica. In both cases, recycled materials are used – such as polyester fibers made from old plastic bottles, textiles or fiber remnants from selvedges. According to Audi, the Dinamica material is similar to Alcantara, while the Kaskade fabric, whose seam graphic is based on the look of the single frame, is reminiscent of natural fibers such as wool. 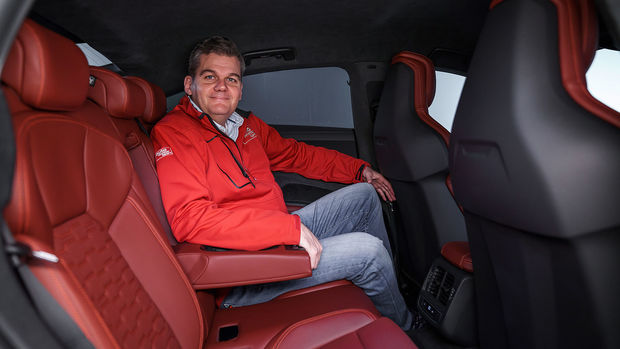 The rear seat is spacious enough.

As expected, there are no noticeable differences to the Taycan in terms of space: Thanks to the 2.9-meter wheelbase, there is plenty of knee room in the rear, even when tall people are seated in the front. They also have to watch their heads, especially when getting in. Depending on their stature, rear passengers of 1.90 meters or taller come into contact with the headliner. Audi’s rear trunk capacity of 405 liters is almost 40 liters more than Porsche’s, and 85 liters at the front (Porsche: 81 liters). 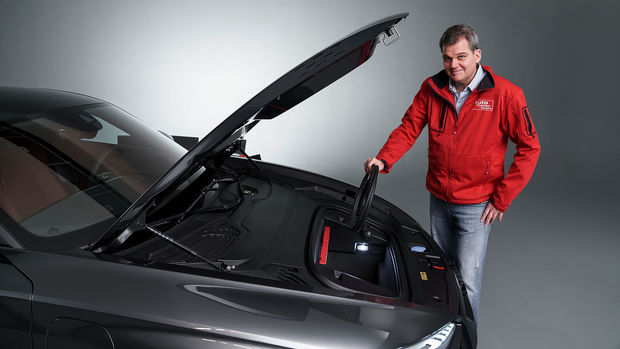 … unproblematic and quite clever

… not worthy of the Audi brand – where is the advantage through technology when the flagship is stolen?

Regardless of how big the market for four-door electric coupes at six-figure prices is: Porsche Taycan and Audi E-Tron are unlikely to get in each other’s way. Because even if the differences in driving are not as great as promised, they are striking in design. If you don’t have an eye for that, you still have the brand logo, price and image to differentiate. And although the powertrains are both electric and almost identical, the two cars even sound different.