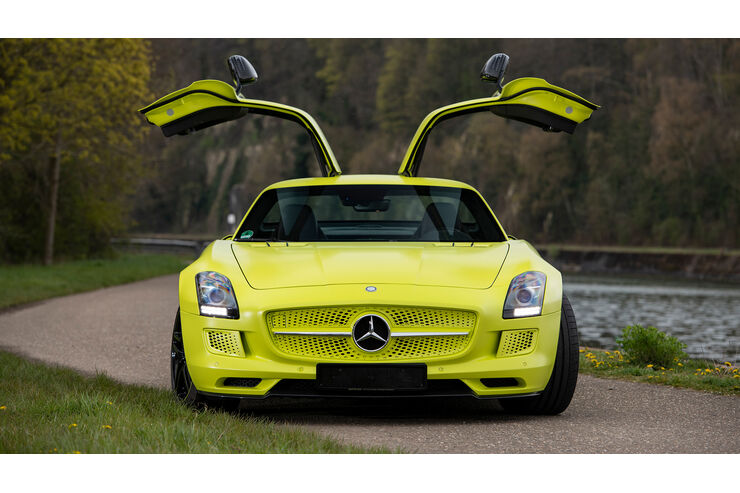 One of only nine examples of the purely electrically powered Mercedes-Benz SLS AMG Coupé Electric Drive produced is up for sale at RM Sotheby’s. The electric racer is expected to easily surpass the one-million-euro mark.

Mercedes-AMG started a new era in 2012 with the SLS AMG Coupé Electric Drive: the locally emission-free super sports car with high-tech from Formula 1 was the most exclusive and dynamic way to drive an automobile with electric drive. The most powerful AMG high-performance vehicle at the time featured four electric motors with a total output of 552 kW, or 750 hp, and a maximum torque of 1,000 Newton meters. The four compact permanent magnet synchronous electric motors, each weighing 45 kilograms, achieve a maximum speed of 13,000 rpm each and operate the four wheels wheel-selectively via an axle-mounted transmission concept.

The SLS AMG Coupé Electric Drive accelerates from zero to 100 km/h in 3.9 seconds. The top speed is 250 km/h (electronically limited). This makes the gullwing the fastest electrically powered production vehicle in the world. Of the 100 vehicles originally planned, however, only nine actually made it onto the road. Now one of them is for sale at RM Sotheby’s with 3,800 kilometers on the clock and in garish AMG Green Electric and a black leather interior. Delivered new to Switzerland, the car with serial number WMX1978901A010229 is currently in the Netherlands.

The additional drive for the front wheels called for a newly designed front axle: unlike in the production vehicles with AMG V8 engine, which have a double wishbone axle, the SLS AMG Coupé Electric Drive uses a space-beam axle with pushrod struts. The reason: the upright struts have to make way for the additional drive shafts. As is common in many racing cars, horizontal spring struts are now used, which can be operated via separate push rods and bell cranks. 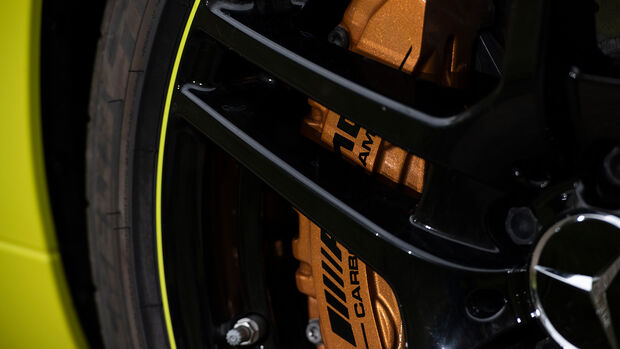 Deceleration is brutal thanks to the high-performance braking system.

The SLS AMG Coupé Electric Drive decelerates with the aid of the AMG ceramic high-performance composite braking system. The generously dimensioned discs – 402 x 39 millimeters at the front, 360 x 32 millimeters at the rear – are made of ceramic reinforced with carbon fibers and are connected to an aluminum pot in a floating radial arrangement.

The electronic rotary switch for selecting the three drive programs ” C” (Controlled Efficiency), “S” (Sport), “S+” (Sport plus) is located in the center console. With the help of this switch, the driver can call up three different power levels of the electric motors, which also changes the top speed and the response of the accelerator pedal. Behind the buttons for “Power On / Off” and “ESP ON/OFF” are the buttons for AMG Torque Dynamics and for AMG Setup.

High-voltage battery weighs in at 548 kg

The high-voltage battery of the SLS AMG Coupé Electric Drive has an energy content of 60 kilowatt hours, an electrical load capacity of 600 kilowatts and weighs 548 kilograms – all absolute bests in the automotive sector at the time. The liquid-cooled lithium-ion high-voltage battery has a maximum voltage of 400 volts. It consists of twelve modules, each with 72 lithium-ion cells. 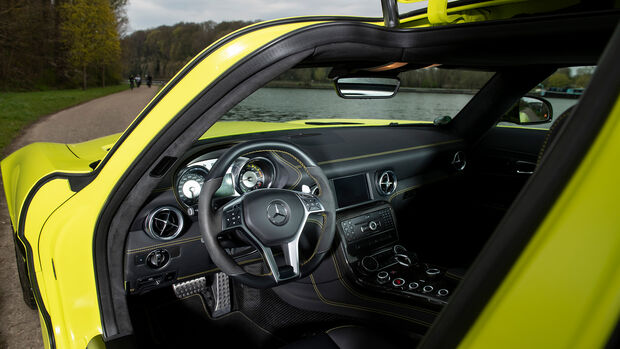 The cockpit of the SLS AMG Electric Drive.

A powerful electronic control system converts the direct current from the high-voltage battery into the three-phase current required for the synchronous motors and regulates the energy flows in every operating state. Two low-temperature cooling circuits ensure balanced operating temperatures for the four electric motors and the power electronics. A separate low-temperature circuit is responsible for cooling the lithium-ion high-voltage battery. At low outside temperatures, an electric heating element quickly brings the battery up to the optimum operating temperature. At extremely high outside temperatures, the cooling circuit for the battery can be additionally cooled with the aid of the air conditioning system.

This opportunity doesn’t come along very often: A real highlight of the electric vehicle genre is on the market. Of the nine examples of the SLS AMG Coupé Electric Drive produced, one is now up for sale at RM Sotheby’s auction. The price is likely to be at least one million euros. Its original price was 416,500 euros, making the electric SLS by far the most expensive Mercedes model during its construction.