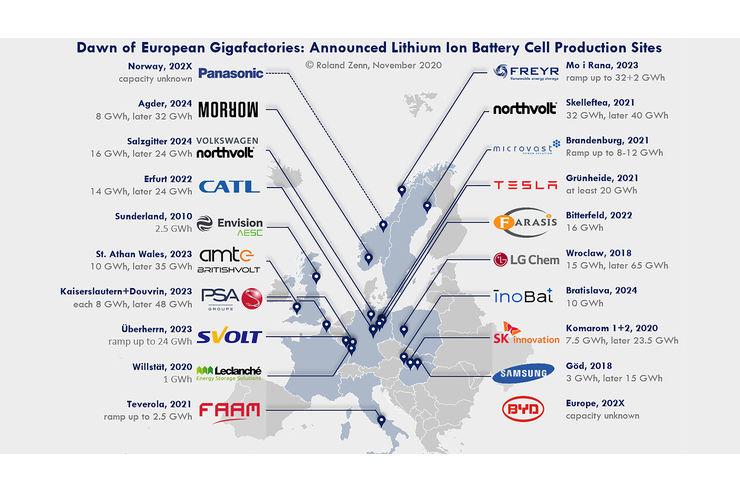 The topic of battery cells for electric cars and their production is a contradictory one. On the one hand, it is always said that the Asian suppliers have such a big technological lead and can manufacture the electricity storage units so cheaply that it is not worthwhile to have our own European cell production. This was one reason, for example, why Bosch turned down its efforts in this regard in spring 2018. The Swabians shied away from the financial risk.

Germany as the center of European cell production

On the other hand, the importance of batteries for electromobility is repeatedly invoked. Even the car manufacturers name them as the most important part of an e-vehicle; not, for example, the engine(s) or the chassis. This means that we should not become too dependent on the big players from China or South Korea when it comes to battery cells. That is why a rethink is gradually taking place. Together with companies such as CATL, LG Chem and Samsung, and with the support of politicians, the European automotive industry is beginning to set up cell production facilities in Europe.

The map shows it: In the next few years, a number of plants for the production of battery cells will be built in Europe.

The plans are extensive and the first factories already exist. For example, in Wroclaw, Poland, or in Göd, Hungary. But the map shows it: Although some battery manufacturers are settling in Eastern Europe and Scandinavian locations and Great Britain are also coming into play, the production of battery cells is concentrated in Germany. If smaller locations and all announced plants are included, there are even more than the eight factories shown here.

The construction is interrupted from time to time due to various reasons, but basically the project Tesla plant in Grünheide is progressing straight ahead. In the meantime, it has also become clear that not only cars but also battery cells are to be produced at the site near Berlin. Tesla CEO Elon Musk has announced plans to build the world’s largest battery factory in Brandenburg. In the first step, the production capacity should be around 100 gigawatt hours per year. Later, it could be expanded to 250 gigawatt hours, said the announcement world champion in the fall of 2020. 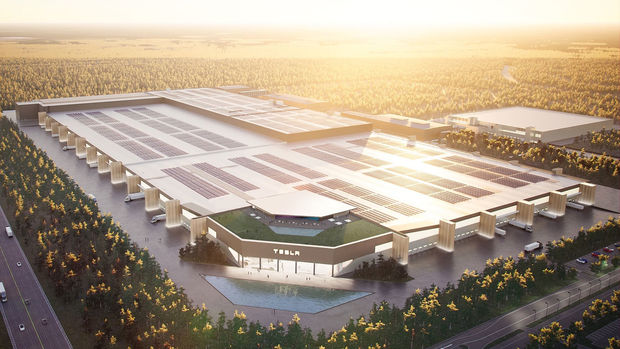 Tesla will not only manufacture cars in Grünheide, but also the batteries needed for them.

Does it have anything to do with the Tesla announcement that the battery system manufacturer Microvast is also locating in Brandenburg? Namely in Ludwigsfelde, which is only 50 kilometers away from Grünheide. Probably not, because the Americans have not had any business relations with the Californians up to now. And the site on which the new European headquarters is being built was purchased by Microvast some time ago. The company plans to invest a total of three-digit millions so that up to 250 employees can produce 300,000 to 500,000 battery modules annually with a total capacity of eight to twelve gigawatt hours. Production is scheduled to start at the beginning of 2021.

The European offshoot of Chinese battery cell manufacturer Farasis Energy is currently raising a plant in Bitterfeld-Wolfen. The factory in the city in Saxony-Anhalt, which is known for its tradition in the chemical industry, is scheduled to start production in 2022. A capacity of 16 gigawatt hours is planned. Initial supply contracts have already been signed. Turkish electric car startup Togg will also become a Farasis partner, as will Mercedes-Benz, which has even secured shares in Farasis through an equity investment.

From 2021, the Leipzig plant will also produce battery modules for the high-voltage batteries of the BMW Group’s electrified vehicles. The company is investing more than 100 million euros in the 10,000-square-meter site by 2022. Large-scale production of battery modules will start here as early as mid-2021. By 2022, more than 150 employees will be working in battery module production at the site. 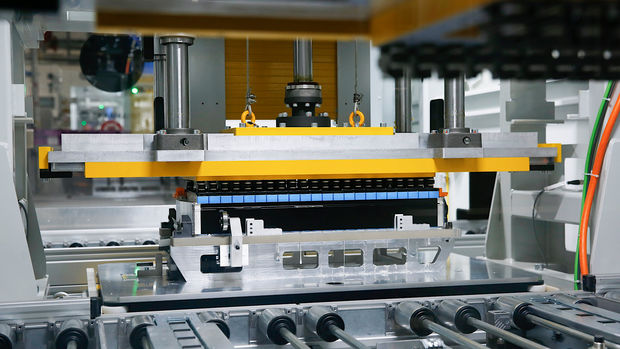 BMW battery modules are to be manufactured in Leipzig from 2021.

Politicians in Germany and France are vigorously pushing ahead with the establishment of European battery cell production. A consortium involved in this has been founded by Opel parent company PSA and French battery manufacturer Saft, which belongs to the Total Group. The two companies each hold a 50 percent stake in the Automotive Cell Company (ACC) joint venture. Now it is clear that the company will also produce electric car batteries in Germany. To this end, a new plant is being built at Opel’s long-established Kaiserslautern site, which is scheduled to start operations in 2023 and employ 2,000 people. The plant will produce around one million batteries per year, with a total capacity of eight gigawatt hours and a final capacity of 24 gigawatt hours.

Svolt is an offshoot of the Chinese car company Great Wall Motors. The company develops and produces lithium-ion batteries and battery systems for electric vehicles. From 2023, this is also to happen in Überherrn in the Saarland. Construction of the plant, which will provide jobs for up to 400 employees, is scheduled to begin in early 2021. Initially, Svolt plans to have a production capacity of six gigawatt hours. Depending on demand, this is to be expanded to 24 gigawatt hours in further six-step stages.

It was a game of ping-pong between Daimler and battery production in Kamenz: Li-Tec GmbH, a joint venture between Evonik and Daimler AG, began operations in 2008. After seven unprofitable years, production came to an end for the time being. But not for long: In the meantime, Deutsche Accumotive, a wholly owned Daimler subsidiary, is once again manufacturing e-car batteries in Kamenz. In 2019, the company has already started up its second plant in the Saxon city, where it produces batteries for passenger cars and commercial vehicles – including for the Mercedes EQ models. 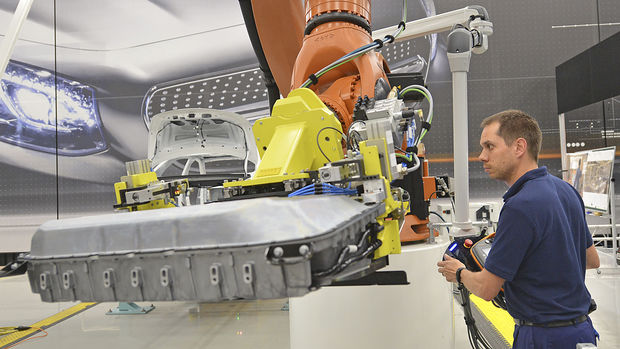 Daimler is using more and more traction batteries from Kamenz in Saxony.

VW boss Herbert Diess is fully committed to electromobility. An understandable strategy, but one that is detrimental to the Group’s own component plants. Take Salzgitter, for example: What happens to a plant that manufactures combustion engines when combustion engines are no longer in demand? The answer in this specific case: battery cells for electric cars are produced. Together with its new partner Northvolt, VW is investing around one billion euros in Salzgitter so that around 1,000 employees can produce enough batteries to cover a large part of its own battery requirements. In 2020, a battery research facility is also scheduled to begin operations in Salzgitter.

Ground has already been broken: In 2022, cell manufacturer Contemporary Amperex Technology (CATL) plans to start up its new factory at Erfurter Kreuz. The Chinese group is investing 1.8 billion euros so that around 2,000 employees can produce e-car batteries in one of the world’s largest battery cell plants. BMW’s interests are also likely to have played a role in the decision to locate the plant in Thuringia. The Bavarian carmaker has a stake in CATL through its Chinese joint venture Brilliance and would like to cover a third of its battery requirements from German production. The supply routes are likely to be short: BMW manufactures the i3 in Leipzig and the new iX in Dingolfing.

So far, cell production here has been rather small: Leclanché currently produces one million lithium-ion cells with a total capacity of 200 megawatt hours annually at the site in Baden-Württemberg. However, the Swiss company is currently investing heavily in the plant together with the Polish Eneris Group in order to expand production to one gigawatt hour by 2022. In the long term, the aim is even to create the conditions for 2.5 gigawatt hours. 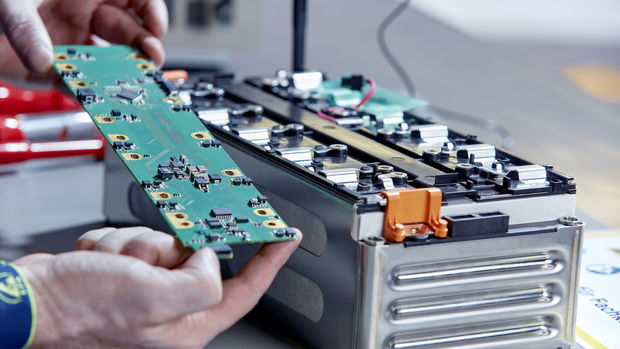 Whether e-mobility really achieves a breakthrough depends above all on the batteries.

As many as nine European countries are participating in a second battery cell alliance. The initiative is spearheaded by the German Federal Ministry of Economics and Technology, which is funding the establishment of domestic battery cell production with one billion euros. However, it is not yet officially known which companies are the members of this second consortium. Among others, the “Handelsblatt” mentions BMW, BASF as well as Varta and a fourth German company. It is also not yet known where the production facilities will be built and how many jobs could be created there. However, promoting value creation and preserving jobs in Germany is a concrete goal of the initiative.

Back and forth it went for TerraE as well. In spring 2017, the consortium of six companies was founded in Frankfurt – with the aim of gradually building a battery cell factory up to the gigafactory. The lead company was the battery specialist BMZ Group from Karlstein, which took over TerraE completely in the fall of 2018. So far, the company from Lower Franconia has been processing Asian battery cells into lithium-ion batteries that are used by Streetscooter, the Aachen-based producer of electric vans, among others. Now they want to set up cell production themselves and are looking for investors for this project.

Before battery cells can be manufactured, they have to be developed. A research center funded by the state to the tune of 500 million euros is to be set up at the University of Münster. So far, so clear. Or is it? The decision to award the contract to the university city in North Rhine-Westphalia is a piquant one because experts actually favored other locations. In addition, the award process is said not to have been entirely clean, and the constituency of Federal Research Minister Anja Karliczek (CDU) lies in neighboring Tecklenburg County. However, it looks like Münster will retain the contract.

Yes. The weal and woe of e-mobility depends on it.

No. Asian batteries are better and cheaper.

Things are happening in terms of battery cells in Germany and Europe. And apparently just in time before electromobility really takes off in this country. The prerequisite for this is, in turn, functioning batteries with a long range. So everything is connected, which is why Germany needs to position itself consistently in all aspects.