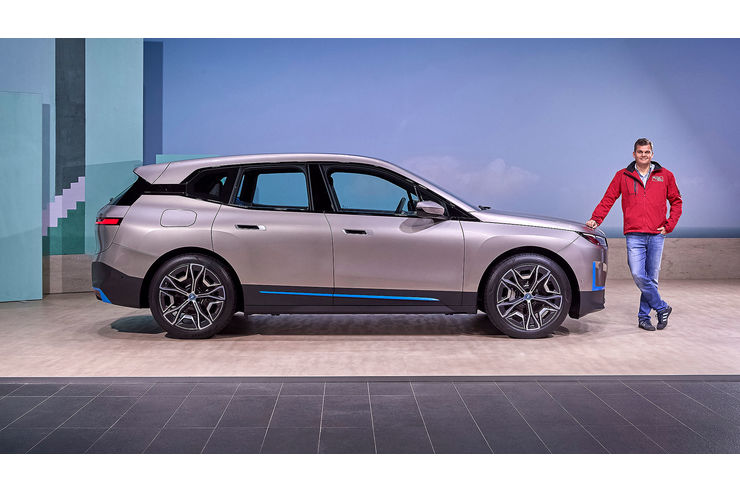 Although the iX is designed as a pure e-car, its underpinnings do not form a new architecture for future purely electric BMWs. From 2025, this will be taken over by a completely new architecture, which will not only be designed for electric drive, although it will clearly shift the focus to electric and virtually reverse the principle of the previous Cluster Architecture (CLAR): While the latter was designed for internal combustion engines, but could also integrate plug-in hybrids and electric drives, the new one is primarily designed for electric drive, but should also be able to carry internal combustion engines, which BMW believes will still play an important role in the second half of the decade, at least in some markets.

Autonomous driving initially only after Level 2

The iX platform, on the other hand, will remain a solitaire, while its components will be used in many new models (including those based on the new architecture). These include high-voltage storage and electric drive (in the case of the iX, two related, scalable motors and axles) as well as the entire technology toolbox of sensors and electronics, which should eventually enable the iX to drive autonomously according to Level 3.

The interior features few buttons, but a large curved display

Contrary to BMW’s original promises, the electric SUV will not be able to do this at the start of production at the end of 2021, but only later. Over-the-air updates could enable it to do so, because the complex 5G-capable hardware with extreme computing power for data processing and radar and lidar sensors as well as cameras should be on board from the start. Much of it sits behind the huge enclosed kidney. Its cover is elaborately painted in several layers in such a way that it is transparent for the sensor technology but not for the viewer from the outside.

Even if BMW has to row back on autonomous capabilities – it manages quite a leap when it comes to the e-drive: the iX is said to have a battery of more than 100 kWh (gross) and to need less than 21 kWh per 100 kilometers according to WLTP. And that’s despite the fact that the two e-motors will produce more than 500 hp (370 kW) of power and should accelerate the iX, which weighs around 2.5 tons, to 100 km/h in less than five seconds. The range is expected to be more than 600 kilometers (600 miles) according to WLTP, and more than 300 miles (483 kilometers) according to the demanding EPA standard.

The scalable electric motors of the fifth generation (by BMW’s count) could deliver up to 300 kW per axle. Compared to the i3’s engine, they have increased power density by 30 percent, and the narrower width helps the degrees of freedom in the chassis. Installation space is also saved by integrating the inverter and the transmission with dry sump lubrication. The drives are a whopping 28 dB quieter than those of the i3. 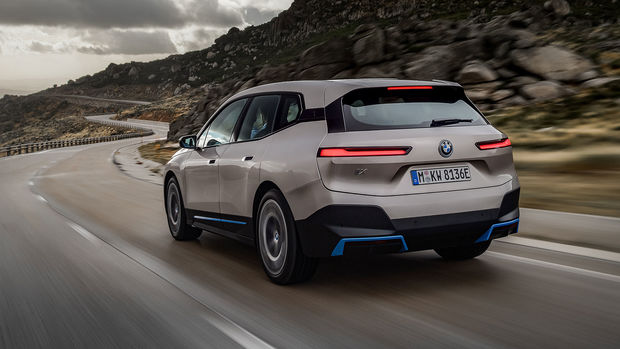 The new e-SUV is said to have more than 500 hp and accelerate to 100 km/h in less than five seconds.

As current-excited synchronous machines, the BMW e-motors do not require rare earths for permanent magnets. However, the Munich-based company sees external excitation above all as the key to particularly advantageous control of power and torque. Because the strength of the magnetic field is decisive for the torque and depends on the controllable current flow, BMW wants to achieve the powerful acceleration from a standstill that is typical for e-cars, in contrast to the competition, even at higher speeds – the maximum torque is to be available up to 6,000 rpm. BMW cites 17,000 rpm as the top speed, so even very high speeds, probably up to the voluntary self-restriction of 250 km/h, are achievable without a second gear. However, BMW has not yet revealed how fast the iX is allowed to go. However, the Munich company will certainly not want to stay below the 200 km/h that Audi allows for the E-Tron.

A decent drag coefficient of 0.25, measured against the less favorable design, should help in keeping fuel consumption in check even at higher speeds (for comparison: the Audi E-Tron comes in at 0.28). The wind resistance comes from considerable effort, and BMW quantifies what improves the range: the measures at the front of the vehicle, underbody, rear and wheels alone should bring more than 65 kilometers. 15 kilometers of this is accounted for by the so-called air performance wheels. The active air flap control system contributes around 25 kilometers: In normal driving situations, not only the kidney but also the air intakes in the lower area of the front apron are completely closed. The transition between the front and hood also shows hardly any gaps – in fact, it cannot be opened. The iX customer can only snap open the logo by pressing on it to fill the opening below with washing water. The front hatch itself can only be opened in the workshop – so there is no front trunk (frunk). But that saves the corresponding mechanism and hinges.

The hood cannot be opened, only the workshop can remove it.

The weight, which is less decisive for consumption, doesn’t seem so groundbreaking, although the Munich company has gone to a lot of trouble with the use of carbon fiber (on the side frame, water gutter, roof frame, cowl and rear window frame) in a kind of carbon cage and an aluminuim space frame. But you have to put the 2.5 tons or so in relation to the dimensions: The iX has a wheelbase of exactly 3.00 meters. That’s 2.5 centimeters more than the X5, with which the iX has roughly the same length (a good 4.90 meters). The height is on a par with the X6 (around 1.70 meters) and thus undercuts the X5 by around five centimeters. In terms of wheel sizes with 21 and 22 inches, the iX is similar to the X7.

The interior of the BMW iX

The iX makes the most of its lush dimensions and flat floor with the battery in it to create a spacious living room atmosphere inside. Displays and controls are restrained in design, the up to 30 speakers with 1,600 watts are integrated mostly invisibly, and the air vents are filigree and discreet. Instead, inconspicuous heated surfaces help the air conditioning, and the projector of the head-up display is embedded almost invisibly in the instrument panel – Shy Tech is what not only BMW calls this principle. More eye-catching: the hexagonal steering wheel. It is a reminder that the iX is supposed to take over the steering at some point and sometimes return the driving task – so it may be helpful if the person at the wheel can also quickly grasp the position of the steering wheel haptically. 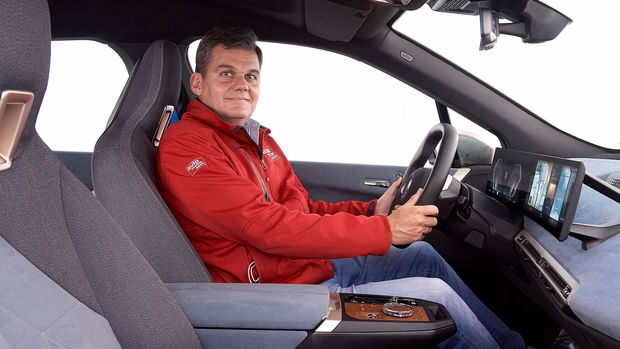 On a small center console between the front seats, a rocker switch for selecting the drive levels and an iDrive controller sit directly on a wooden surface that also bears marked, touch-sensitive areas to replace buttons. On top of the microfiber-covered dashboard, which slopes sharply toward the driver, is a large curved display that extends from the far left to the center. The display areas of the 12.3-inch display of the (former) instruments and the Control Touch display with a screen diagonal of 14.9 inches merge on it. In conjunction with the next generation of the BMW Operating System, the Curved Display in the BMW iX is also designed to take operation to a new level: “There is no user interface in the industry that can be operated as easily and confidently as ours,” says BMW’s Chief Development Officer Frank Weber.

Lounge in the rear

There’s room for three in the rear. Like the newly developed front seats, the outer seats have integrated headrests. In the middle seat, the headrest can be folded down to improve rearward visibility. The elimination of the center tunnel also gives passengers in the second row of seats plenty of legroom. The interior designers have pulled the bench seat far into the door area so that it is more comfortable to face the neighboring occupant.

Those who don’t want to can look at their personal tablet. This can be hooked into a Travel & Comfort system integrated into the front seat, which is also suitable for attaching coat hooks. Two USB-C ports are also integrated into the headrests of the front seats. Optional rear seat heating and integrated speakers are also available. The rear seat backrest can be split 40:20:40 and folded down to increase the estimated 500-liter trunk. There is a very spacious, deep compartment under its load floor, which would not have to capitulate to stowing even very long charging cables.

Speaking of which, the iX is said to be able to charge at up to 200 kW and recharge power for 120 kilometers in ten minutes. To charge the battery from ten to 80 percent, 40 minutes should be enough. Those who use green electricity for this purpose may also be pleased to know that a natural extract from olive tree leaves is used for the surface treatment of the leather of the seats and instrument panel, and that FSC-certified wood and a high proportion of recycled plastics are used in the surfaces of the door trim, seats, center console and floor trim.

Market launch and price of the BMW iX

The iX is scheduled to drive to the first customers in November 2021. BMW did not yet want to reveal whether there will be versions with a smaller battery or without all-wheel drive, i.e. only with rear-wheel drive. There are also only rumors about the prices: There is talk of 100,000 euros, which sounds realistic at least for the version with more than 500 hp and a battery of more than 100 kWh and would match the price of just under 70,000 euros for the considerably smaller iX3 with 286 hp and rear-wheel drive.

There should still be room for price increases even for the most powerful version: The sports package, large wheels and all kinds of interior features will cost a lot more. This electric SUV from BMW remains true to the brand tradition.

Even if BMW does not yet want to say when the iX will be able to drive autonomously after Level 3: The Munich-based company’s first SUV designed specifically for electric drive shows what they can get up to in the field. Maybe the battery cells aren’t the best yet, but how ambitiously the motors are developed does the brand name credit. BMW has also put a lot of effort into the body, and the expertise of the chassis developers will also have made a lot out of the favorable conditions of the e-drive. The expected suspension comfort will meet excellent noise comfort and could make the iX palatable to many customers, even if they may be estranged with the design despite a considerable toning down compared to the concept car.