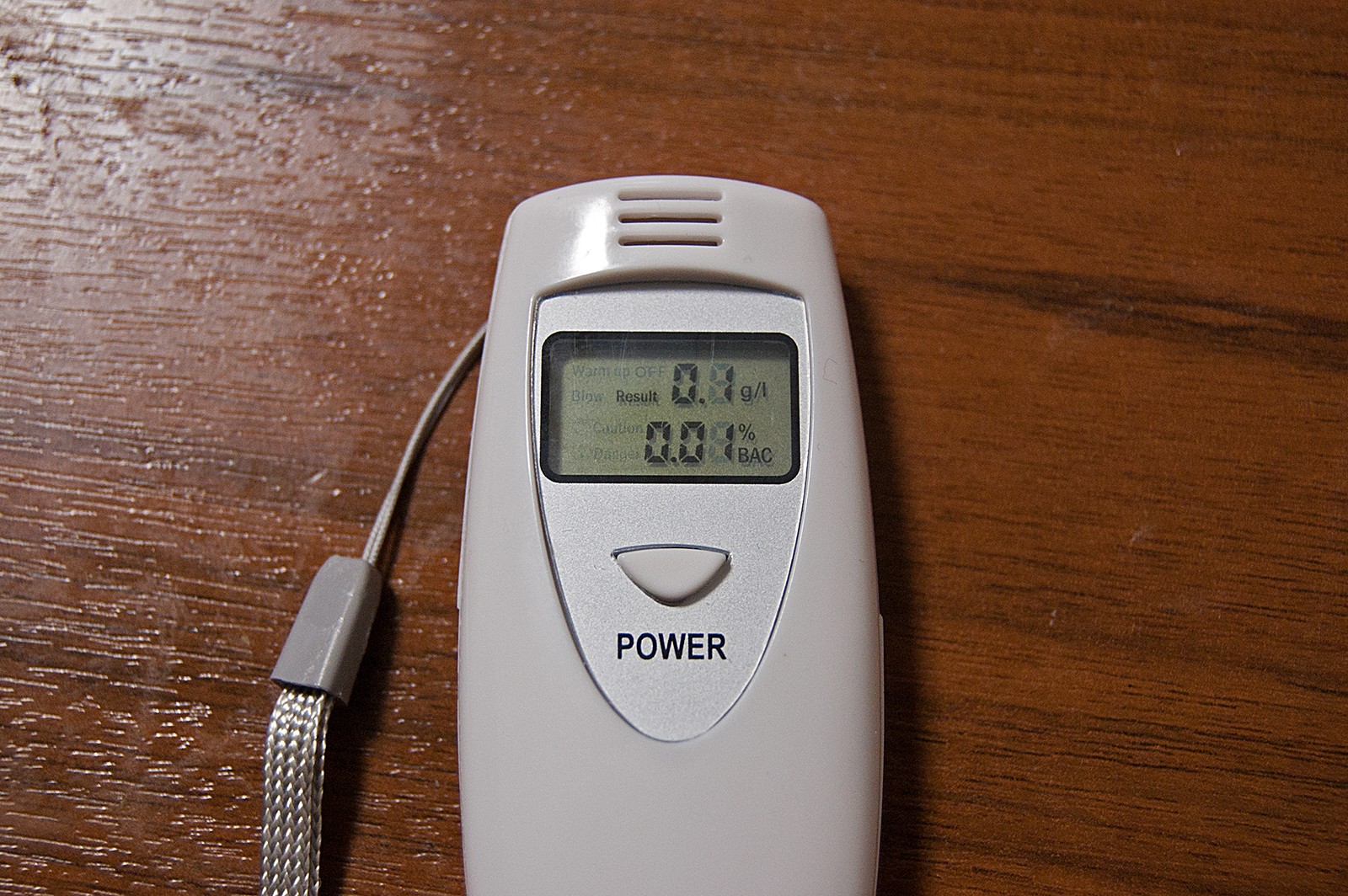 The essence of the experiment

Our narrative should begin by describing the essence of our research. I confess that during the experiment we had to change its concept somewhat.

Initially, the task was quite simple: to drink some alcoholic beverages and at certain intervals to blow into the breathalyzer, checking for how long this or that drink will be completely eliminated from the body (that is, the tester will show zero in the exhalation). Of course, to test with beer, wine, liquor, tincture, gin and tonic, port, vodka, cognac, whiskey, bourbon and moonshine, and even in different doses, is very difficult and very long – it would take me over a month (because after each drink you must be completely sober, they cannot be mixed and you can not take the next test, feeling hung over after the previous).

So I wanted to make it easier: to take 0.5 beer, a glass of wine and half a liter of vodka-all the most popular and available. But while the point is, New Year’s Eve and tosie-bosie, the vodka ran out just for nothing. I did not want to drink the bottle again (maybe I even could not – it did not fit). So at the last moment I replaced the vodka with whiskey. But that’s half the trouble.

Worse, the semiconductor breathalyzer from an ordinary supermarket turned out to be very strange in its behavior and its readings. So the idea came to assess not only the elapsed time (strange as it may seem, here you can rely on the work of the tester in general), but also the Alcolock itself. Well, let’s look at this beautiful world once again with sober eyes and let’s go carry the liver on the altar of truth.

What are ppm’s and how many can there be?

I almost forgot: first we have to figure out what and how we have to measure with a breathalyzer.

As you all know very well, in order to earn the deprivation of rights and a fine of 30 thousand rubles, it is necessary to show the presence of alcohol twice – in the exhaled air and in the blood (or simply to refuse to conduct the test). Of course, there is no one at home to give blood, and any breathalyzer measures the amount of alcohol in the air.

We are used to measuring it in ppm – thousandths of an ethanol concentration. In our case, this is the bottom line on the breathalyzer, where values are given in BAC (Blood Alcohol Concentration), where 1‰ BAC is one gram of ethanol per liter of air. Promille is not an absolute value, so we officially use more specific units – grams of alcohol per liter of exhaled air (g/l), milligrams per liter (mg/l), micrograms per liter (µg/l) or micrograms per 100 milliliters (µg/100 ml). In our case, the top line is just grams per liter. But we are more accustomed to hearing the word “ppm”, so we will use it.

As you know, in the Russian Federation, the allowed dose is 0.160 mg/liter. Of course, it doesn’t mean that you can drink something at the wheel – 0.16 ppm will allow you not to lose your license because of the device error, taking certain medications, or due to the individual characteristics of your body.

One last thing: the period of alcohol withdrawal depends on the weight of the alcoholic. So for reference: my weight is 104 kg. Yes, it’s not much. But I have to get sober faster too, ha-ha-ha.

Let’s go for a promotion.

Let’s start with beer. Probably not the most popular drink in Russia at New Year’s, Christmas, and other holidays, but still. I take the simplest light beer (not a connoisseur or connoisseur, sorry) and drink a can. Unfortunately, it was only after this process that I noticed that it is 0.45 liters, not 0.5. Well, then the data will be for this volume: running to the store to “catch up” with 50 grams of beer is too ridiculous. The strength is 4.5%.

You cannot breathe into the breathalyzer immediately after taking a sip – you can burn the sensor. Therefore after the last sip we measure at least five minutes (better 10 or 15, but I couldn’t wait to blow) and exhale. Hmm, the gauge shows only 0.03. That is theoretically possible to drive.

In 30 minutes the breathalyzer has already shown 0,01, and in 40 minutes – 0,00. I wish I had a decent certified breathalyzer, because I don’t really trust such readings. But I have a doctor I know, who can somehow comment on it.

According to him, a light lager in this volume can really come out completely in 40 minutes (although a more realistic time is an hour to two). But 0.03 right after drinking it cannot be. According to the expert, a more reliable value is about 0.20. And the license, of course, with such readings will be taken away (but it’s not exactly true, because there are still some necessary procedures: re-take and blood sampling. And by this point after one bottle of beer you can already sober up). So the conclusion is one: something our Breathalyzer does not show. It’s a shame, after all it costs 800 rubles… But you can not trust the figures of semiconductor breathalyzers – they are inaccurate. Electrochemical breathalyzers are another thing, but the cost of a device of this type and acceptable quality starts somewhere from 10 thousand rubles. That seems a bit expensive.

But there is good news: the figures in our device are very relative, but it is able to show the main thing – the presence of ethanol in the exhaled air. It is clear that it would be interesting to know the concentration, but what can you do. The main thing is to check how fast you can get rid of the overbreath “in the exhaust.

Yes, the initial concentration with beer was underestimated. What would happen if we took something stronger?

We take a white semi-dry wine. The label says about 11.5-13.5%. That’s good enough for us. We measure 0.25 and take it in. After five minutes of waiting, it reads 0,19 ‰. That’s already a lot, you can’t drive. It’s strange that this wine didn’t go to my head at all. But after half an hour, the situation changes abruptly.

First of all, the tester reading dropped to 0.01. That is, I am practically sober. However, it was only now that I got a little “buzzed”. The wine was playing in my head even after 40 minutes after drinking it, but the breathalyzer stubbornly showed 0.01. But when an hour later it abruptly let up, the reading went up to 0.02. It was the same in an hour and a half after drinking. In two hours the tester showed 0.01 again, and in three hours it showed 0.00.

And again: the withdrawal time to zero is very plausible, but 0.01 20 minutes after 0.19 sounds like a lie. And the 0.01 figure in the subjective state of “oh, I’m so drunk” sounds like nonsense. In any case, the intoxication was very noticeable, and I wouldn’t drive in any case. And the Breathalyzer said I could. He shouldn’t have done that. Let’s try blowing into it after a bottle of whiskey. Yes, yes, it’s time for the heavy artillery. That’s the time I’ve been doing this whole experiment for.

I’ll be honest with you: I wanted to limit myself to the same glass – 250 ml. But then something went wrong. I was bent over to brazen alcoholism by that vile Breathalyzer, which both after 0.25 and after 0.3 showed consistently 0.19 ppm. Well, this can not be! Fighting the desire to pick up a guitar or look at Instagram, I still promptly finished this bottle of 0.5 liter. Not because of alcoholism, but purely for scientific reasons. I didn’t take an appetizer – I wanted to maximize the numbers. But the breathalyzer stubbornly showed 0.19. I wondered what would happen if I added more? For the sake of interest (and not just for the reason of being drunk) I added 50 g of whites. Calmly, the trick is done by a professional, not to be repeated at home! But what would you think? 0,19. How could it be! Went looking for the manual.

It turns out that my semiconductor provocateur does not show more than 0.19! That’s its measurement limit. Oh, my gosh… I was wasting my breath, it turns out. But what can I do, if you sacrifice yourself to work, sacrifice yourself completely. Now the main thing is not to fall asleep and to blow into the device according to the schedule.

Half an hour later, the tester showed the same 0.19. That’s good. But 40 minutes later, it suddenly showed 0.14. And that, my alcoholic friends, is a lie. All of you (I mean drinkers) know that strong alcohol has a peculiarity to catch up and finish later than the last shot was taken. By this time I was already screaming Robert Plant on TV, I was burning with the desire to take my guitar away from Jimmy Page, and the Breathalyzer was showing rapid sobering up. God, what a monstrous lie!

An hour later the meter showed only 0.04, an hour and a half later it showed 0.04 again (remember, conditionally sober, when “SOA not established” is 0.13). In two and in three hours it was 0.01. And this was when I was going to buy plane tickets in the middle of the night and secretly fly away on vacation? No way…

And then it got even funnier. After 14 hours the breathalyzer showed the same 0.01 ppm (Mom, why did you give birth to me so weak, my love, squeeze a lemon in a glass of cold water). After 20 hours – also 0.01, but by then it was almost good. I was still not able to drive, I was still stupid, so I was awake and hung over, but I still had a hangover. It is worth noting that the breathalyzer also recorded the ethanol content. It took the figures from the ceiling according to its old tradition, but still it showed that the alcohol had not yet come out.

It did not show zeros until 25 hours later. Strangely enough, this also seems to be true – only after this period of time did I feel completely healthy.

Not a gram in the mouth

I wanted, of course, more objective figures. But, as the experiment showed, a cheap breathalyzer is not capable of showing the truth. So don’t trust it. The only thing it can help with is to understand whether there is alcohol in the exhaled air in principle. And if there is, you can’t drive. And you can’t trust its readings at 0.01 ppm, with which (purely theoretically) you can drive. As a matter of fact, when the inspector of the traffic police blows into the breathalyzer it may turn out that you have not 0,01, but 0,20 ppm there. And you will be fined and sentenced to a fine.

Of course, the best way out is not to drink at all. Or at least do not get behind the wheel after drinking. Neither drunk or hung over. No matter what they say, this thing is dangerous, and an alcoholic behind the wheel is a potential killer. And sometimes quite real. And you don’t want to forgive such crimes.