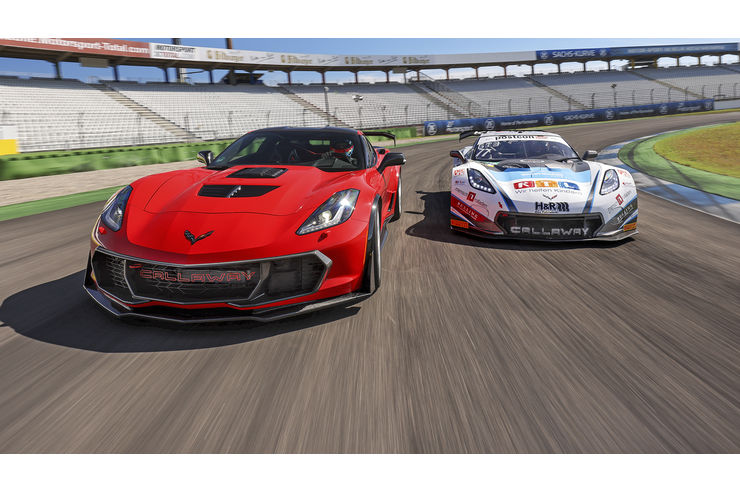 Twenty-five or thirty-five candles? Since birthday cakes are known to influence the power-to-weight ratio, we’d rather skip the cake and candles and get right into the high-octane anniversary party. The illustrious guests: The Callaway Champion C7 anniversary model, limited to 25 units, meets its racing offshoot, the Corvette C7 GT3-R from Callaway Competition.

And where are they celebrating? Well, of course, in the sport auto living room in Hockenheim. Incidentally, not far from the Hockenheimring – in Leingarten, 58 kilometers away to be precise – the story behind today’s story took its course in 1985. Master mechanic Ernst Wöhr and coachbuilder Giovanni Ciccone founded the company Wöhr & Ciccone together. Three years later, the body store for the repair of accident vehicles became the official European representative of Callaway Cars, after Corvette fan Wöhr met Callaway founder Reeves Callaway at the IAA.

Who or what is Callaway, anyway? Founded in 1977 in Old Lyme in the US state of Connecticut, the company has always focused on the development of performance components and automotive tuning. With few exceptions in the early years, the company specialized in the conversion of Corvette and GM vehicles. Callaway has been an official Corvette factory tuner since 1987.

25 years, 25 examples: The Champion C7 is a limited-edition anniversary model based on the Callaway Corvette SC757. Thanks to the “Callaway Gen 3 Supercharger,” it comes with 757 hp and an incredible 1,030 Nm of torque.

A look back into the sport auto archives: The first C4-based Callaway Corvette Biturbo roared through issue 3/1988 on ten fascinating pages. A great quote from the driving report produced at Callaway in the U.S.: “The Callaway Biturbo Corvette hits the ground running with some performance corner numbers that embarrassed the company’s own dyno more than once.” Glorious how the V8, pushed to 382 hp by two Rotomaster turbochargers, was celebrated at the time.

Just under two years later (sport auto 2/1990), the Corvette tuner then competed for the first time in the ultimate showdown at Hockenheim. Headline of the comparison test: “Race of Champions – sport auto is looking for the fastest road car in Germany”. Among the now legendary heroes such as the AC Schnitzer S3 (based on the BMW M3 E30), Ruf CTR or Mantzel-Opel Omega 4.0, there was also the Callaway-Corvette Biturbo, which was then boosted to 400 hp.

Then and now on the pit wall: Callaway importer Ernst Wöhr. Corvette tuning was initially one branch of the company, racing then the other. This explains the 25th anniversary logo on the rear window and the B-pillars of the flame-red Callaway Champion C7, which is based on the Callaway Corvette SC757, which in turn is based on a Corvette Z06 from the C7 series.

In 1995, Reeves Callaway then founded Callaway Competition – Callaway’s racing division – with the duo of Wöhr and Ciccone. While the anniversary model takes to the GP circuit for a warm-up lap, there is still time for some history. Back in 1990, Ernst Wöhr and Giovanni Ciccone had already taken their first steps in historic motorsport together with racing driver Herbert Schürg. “Herbert showed us back then how to set up a race car correctly,” Ernst Wöhr recounts today. 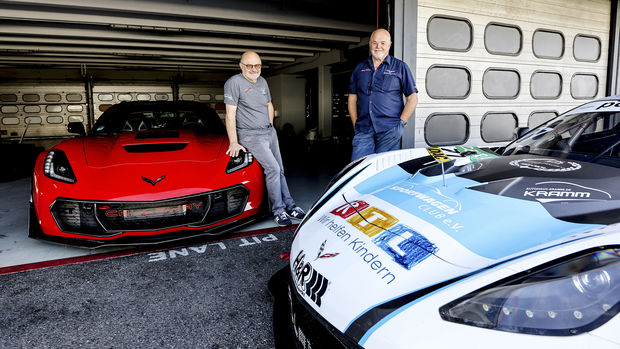 Then and now on the pit wall: Callaway importer Ernst Wöhr. “While still at Le Mans, Reeves Callaway decided to found Callaway Competition with us,” Wöhr recalls with pride. The starting signal for a success story that continues to this day with entries in GT3 racing.

From historic racing, the company moved into the big world of motorsports. In 1993, the first steps in GT racing followed before Reeves Callaway and his German partners competed in the 24-hour endurance classic at Le Mans in 1994. While in 1994 the C4-based Corvette racing version called the “Callaway SuperNatural Corvette” still failed with an empty tank, the team triumphed the following year.

“Our two cars were the first Corvettes in more than 20 years to finish there at the 1995 24 Hours of Le Mans. We just missed out on class victory by finishing second in the GT2 class and were ninth overall. Our customer Riccardo Agusta finished third in the GT2 class and third overall with the identical vehicle. While we were still at Le Mans, Reeves Callaway decided to found Callaway Competition with us, which was then done in July,” Ernst Wöhr still remembers with pride. This was the starting signal for a success story that continues to this day with entries in GT3 racing.

And now Callaway Competition’s 25th anniversary party is really getting started: The fiery red anniversary model rushes down the start-finish straight with a supercharged howl at almost 220 km/h. The boundaries between racing car and GT3 race car are blurred. The boundaries between race car and road car become blurred. The mix of compressor roar and hissing full-load sound of the modified exhaust system is also the reason why we have to bury the time chase after two laps on today’s test day with a very low volume limit. 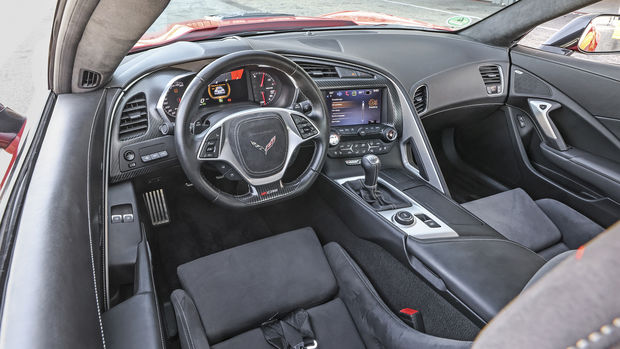 The original mufflers have been replaced with a single muffler from M&M Exhaust. Instead of the four standard tailpipe trumpets, two tailpipes in the Callaway-typical Double D design now make the motodrome tremble.

With a rated output of 757 hp and a maximum torque hammer of up to 1,030 Newton meters, the Callaway Corvette not only makes the BOP-trimmed Callaway C7 GT3-R race version jealous, but also outstrips the 659-hp Z06 base model. Mainly responsible for the extra power? The new supercharger called “Callaway Gen 3 Supercharger.”

To ensure that the driving pleasure on the race track doesn’t end with an unwanted forced pit stop, Callaway installs an extensive cooling system from development partner Tikt Performance. Thermal problems have been a recurring customer issue with the C7-Z06, especially during racetrack driving. Among other things, an enlarged grille, an additional oil cooler and two intercoolers with increased water flow lower the coolant, oil and charge air temperatures. 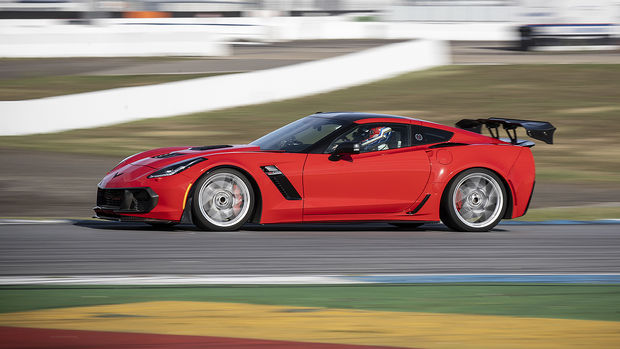 Other ingredients would be a coilover suspension with dampers specially developed by Bilstein and development partner Tikt (10-way adjustment in rebound and compression), uniball joints and longer wheel studs so that wheel spacers can be fitted.

And how does the Jubi model drive? Particularly in the medium-fast and fast corners (north curve, entrance to the Motodrom, right-hand bend in front of the Mercedes Arena), the Callaway Corvette shines with its well-tuned balance, high steering precision and largely neutral handling. Attention is only required when accelerating out of the slow corners (Turn 2, hairpin), as the tuned Z06 can’t hide a certain amount of power oversteer under load.

Certainly, the traction level is also due to the already heavily used set of Michelin Pilot Sport Cup 2 ZP tires, which were actually only scheduled for the warm-up laps for a “warm-up.” Flaming Cup 2 ZP sloops were waiting in the pits for the fastest lap, but then remained unused due to the aforementioned noise issue. Especially with this track tire, the grip differs extremely between a tire several laps old and a dewy one.

In addition to the performance upgrade, the Callaway makers have given the refined Z06 other ingredients for even faster lap times. These include a coilover suspension with dampers specially developed by Bilstein and development partner Tikt (10-way adjustment in rebound and compression), uniball joints and longer wheel studs so that wheel spacers can be fitted. Naturally, a special racetrack set-up has been chosen in terms of axle adjustment.

The lowered ride height also helps to generate even more downforce. A new front splitter and carbon underbody (front) and the rear wing of the GT3 car are also installed to increase downforce. Note from Callaway on the monster rear wing, which folds back to open the tailgate: “On special request, the rear wing can also be entered in the vehicle documents for use in road traffic.” 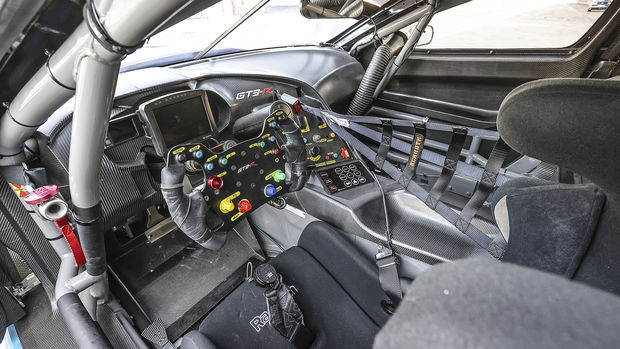 The sea of switches and dials in the C7 GT3-R could make you nervous, but it does not. Map 1, TC 6, ABS 10, Steering 8 – racing engineer Florian has adjusted all adjustable vehicle functions in advance so that the laps of honor are fun but safe.

Pull the right-hand gearshift lever on the steering wheel and the first gear clicks into action. The Bosch Motorsport display now shows the number 1 in large letters in the center. The sea of switches and dials could make you nervous, but it does not. Map 1, TC 6, ABS 10, Steering 8 – racing engineer Florian has adjusted all adjustable vehicle functions in advance so that the laps of honor are fun but safe. The fact that engine mapping, traction control and ABS are adjustable in several stages is familiar from other GT3 cars. However, the fact that there are adjustable characteristic curves for the manual torque of the steering is surprising.

Here we go in the GT3 race car, which is also somewhat different in other respects. Different because, unlike most GT3 cars, the C7 GT3-R was not designed by a manufacturer at the factory. The Corvette Racing factory team is currently concentrating on racing in the IMSA series with the new mid-engine C8.R in the GTLM class. There is no factory GT3 race car from Chevrolet, but for years only from Callaway Competition. Since 2006, more than 20 GT3 Corvettes have been built in Leingarten. Only the chassis, the lower wishbones in a modified form, the upper half of the vehicle’s rear section and the taillights are taken from the C7 road-going model. 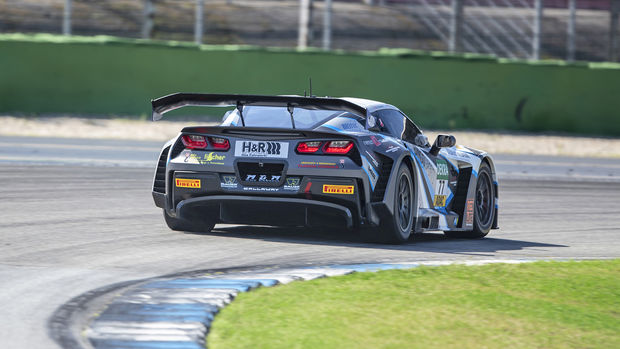 Clutch, throttle – no biting surprise at start-up. Pitspeed limiter button on the steering wheel at the end of the pit lane. Full throttle. The deep rumbling sidepipe concert mixes heart-stoppingly with the mechanical screech of the transmission and differential. Unlike the road version, the GT3 car does not carry a supercharged powerplant, but a naturally aspirated 6.2-liter V8 from Dutch manufacturer APP Racing Engines.

Depending on the BOP rating and the size of the air restrictor, the racing unit produces “only” 550 to 600 hp. It’s hardly surprising that the C7 GT3-R has a lower top speed on the parabolica than the road version.

Braking hard into the hairpin, shifting down the gears at lightning speed with the left-hand rocker switch. No, it’s not the longitudinal acceleration that hammers the fascination needle deep into the vein like all other GT3 race cars. Right now it’s the ultra-late braking points compared to a road-going sports car. Pirelli slick tires, Brembo racing brake system, 300 kilos less weight and a massively higher mechanical and aerodynamic grip level not only give the GT3 Corvette later braking points.

The fast right-hand bend in front of the Mercedes Arena is taken by the number 77 car as if it were on rails, with a mid-corner speed clearly in excess of 200 kilometers per hour. It’s always fascinating to see how stable the GT3 race cars are and with what steering precision when the downforce level is fully developed at high cornering speeds. In the Callaway road-going version, you had to stretch yourself to take said right-hand bend at over 190 km/h.

And while you’re doing laps with the last front-engine Corvette, you almost get sentimental. You don’t really want to get used to the new mid-engine C8 series yet – one more reason to secure one of the only 25 Callaway C7 anniversary models.