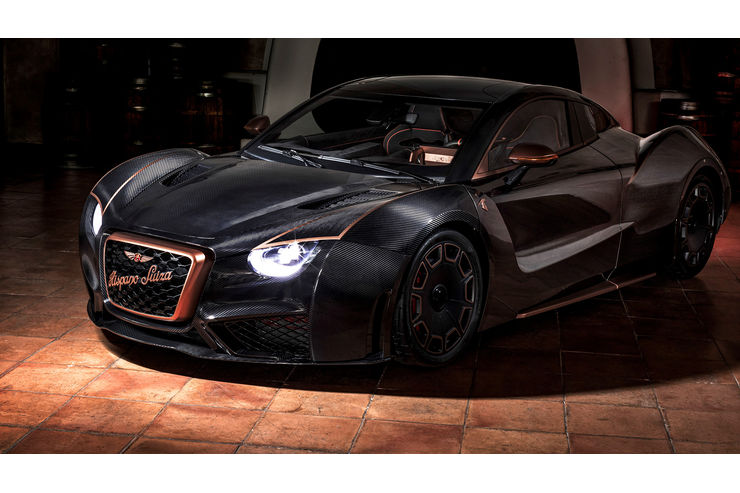 In 2019, Hispano Suiza showed the idiosyncratically styled Carmen sports car in Geneva, which was designed as a luxury touring vehicle for two people. It was powered by two electric motors on the rear wheels, which together produced 750 kW. For this year’s Motor Show, the Spaniards had planned the world premiere of the sporty Carmen with the name Carmen Boulogne. After the show was cancelled due to the corona virus, there was the unveiling digitally.

On the left you see the Hispano Suiza Carmen of 2019, in front – finished in carbon – the new Carmen Boulogne.

Little has changed in terms of design. Aside from the Cupra-derived styling with copper accents, the car still looks a bit like it’s been washed too hot. Or rather, it looks as if the carbon has been baked too hot, because there’s plenty of it in the new model. The car thus saves 60 kilos in weight. Whether all the visible carbon fibers have made it prettier? You be the judge. We think so: The lightweight material is not a panacea.

On the technology side, there is – how could it be otherwise? – more power. Power increases to 820 kW (1,114 hp) and 1,600 Newton meters, Vmax to 290 km/h, and the manufacturer quotes a sprint time of 2.6 seconds from zero to one hundred. The power for this is supplied by an 80 kWh battery with 700 cells, and a range of up to 400 kilometers is said to be possible. Once the battery is depleted, it takes 30 minutes to go from 30 to 80 percent charge. 1,630 kilos of vehicle mass want to be moved here. However, if you want to be the one behind the wheel, some money wants to be moved first. 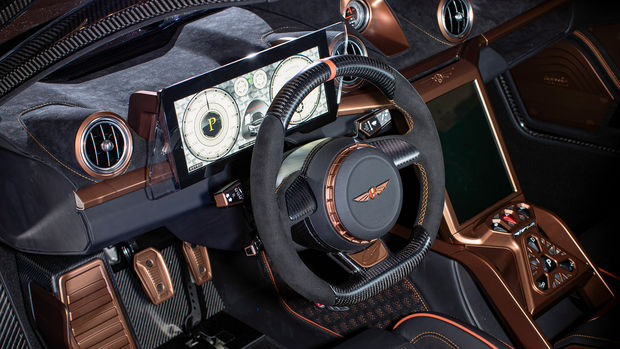 The interior can be freely customized. According to Hispano Suiza, customers can choose from any number of colors and materials.

1.65 million euros is what Hispano Suiza is asking. Net. For that you get a rare piece, because while there will only be 19 Carmen examples in total, there will only be five among those that can call themselves the Carmen Boulogne. What’s more, the electric sports car is to be completely customizable. Alcantara, leather, wood, aluminum – Hispano Suiza promises plenty of choice for the interior.

Yes, the design is very idiosyncratic. But the Carmen Boulogne doesn’t have to convince many customers, after all, the e-sports car is limited to five units.