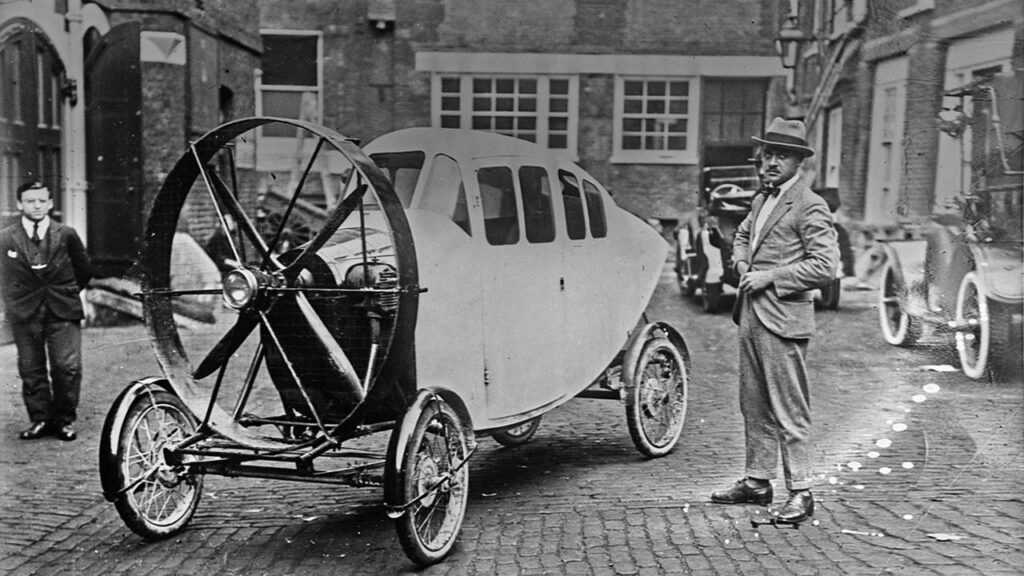 They had wheels, but no transmission or clutch. They had a “fuselage body,” an airplane propeller, and an engine that was started with a starter cord, like a chainsaw or lawnmower. “The Motor” will tell you about perhaps the most paradoxical cars in history that money could buy. 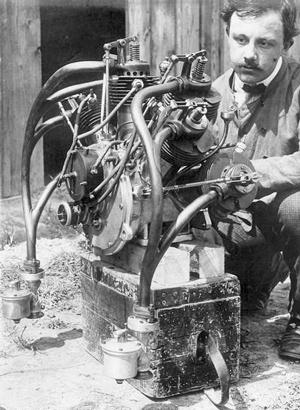 And it all began at the dawn of the XX century, when the Frenchman Marcel Leyat, born in 1885, became seriously interested in aviation. In 1908, a young engineer with a group of like-minded people designed a glider, and soon equipped it with a 5-horsepower engine from a Dion tricycle and flew about a quarter of a kilometer at an altitude of 10 meters to the applause of a crowd of curious Parisians. Leya then took part in the construction of the monoplane in which Louis Blériot was the first in history to successfully fly across the English Channel.

Ley’s “calling card” was his experiments and discoveries in the field of aerodynamic properties of the propeller. The engineer managed to patent a number of successful solutions that found mass application and brought recognition and profit to their rightful owner. But the Frenchman wanted a real revolution.

He had long dreamed of constructing his own self-propelled aircrew using his knowledge and experience in aircraft engineering. The designer justly believed that the car should not necessarily be driven by rotating wheels, but it could be moved by an airplane propeller. Propeller-powered cars had been experimented with before, but Leyat was the first and the last to put such cars into production, albeit a small one. 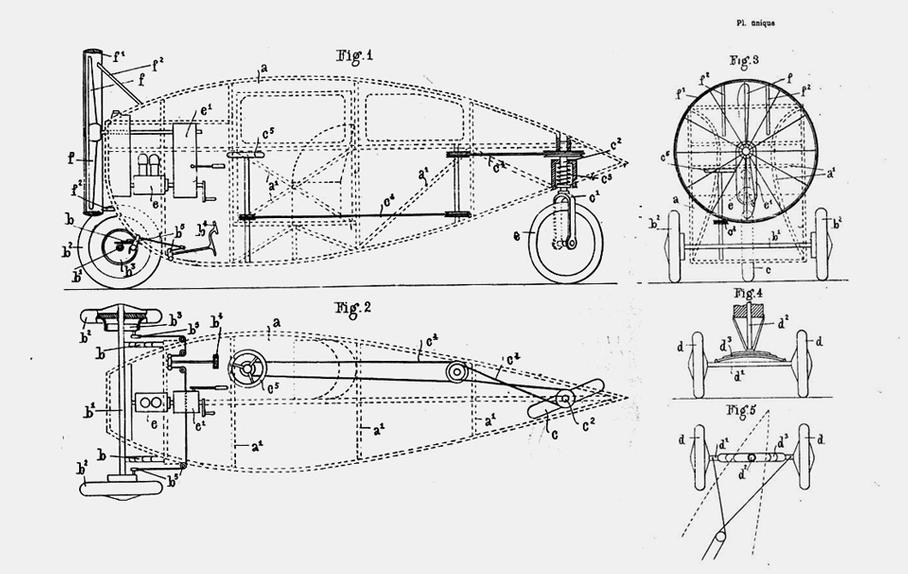 So, the year 1913 came, another year that brought mankind a series of unprecedented discoveries. The first four-engine huge planes in the world “Russian Vityaz” and “Ilya Muromets” were put into the air, Lieutenant Peter Nesterov for the first time performed a “dead” aerobatics, and a talented aircraft designer Marcel Ley created one of the most unusual land vehicles in history – the Helicocycle.

The Helicocycle has a propeller, but it cannot fly. The driver and passenger sit in the drop-shaped body in tandem, like a pilot and a gunner in an airplane. On the ground the vehicle can accelerate and turn as well as its much less paradoxical fellows, though it has no steering on front wheels, neither transmission, nor clutch. 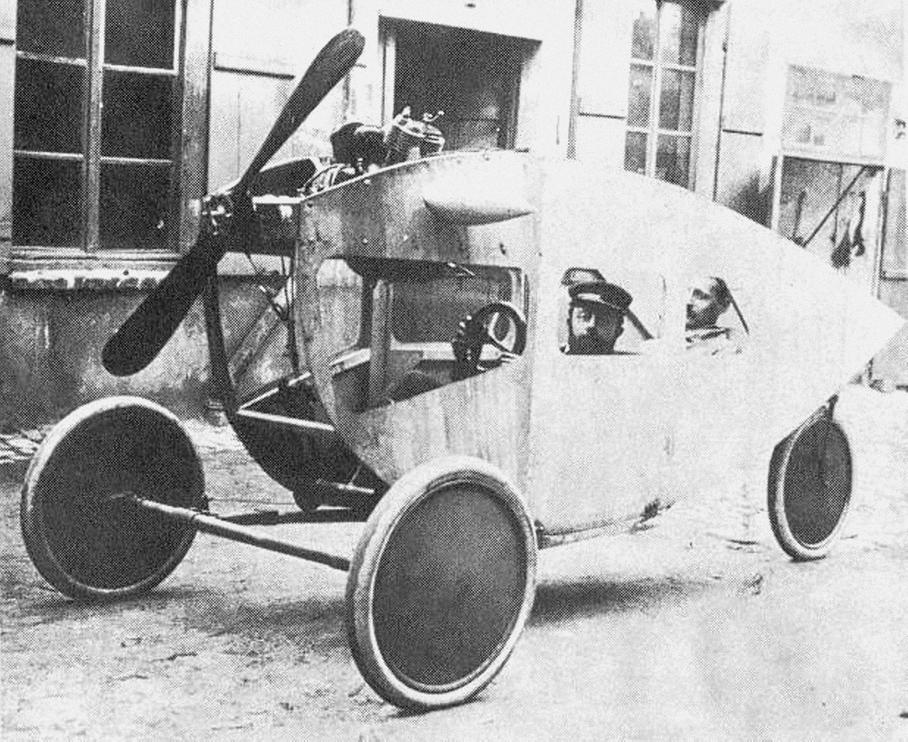 The three-wheeled Helicocycle was propelled by a propeller, the torque to which was transmitted from a two-cylinder motor directly through the crankshaft. The five horsepower of the 1203cc ABC motor was enough to propel the Helicocycle to about 80 kilometers per hour. The speed was controlled by a gas pedal knob, and another knob next door was responsible for controlling the steering linkage going to the single rear wheel.

Leia argued that the Helicocycle had a number of advantages over conventional machines due to its simpler and therefore more reliable design, as well as its very, very moderate fuel consumption.

However, there were obvious drawbacks in the form of, to put it mildly, not the most comfortable airplane interior and low cornering stability. But the main drawback was the propeller, which constantly sprayed a powerful jet of air around the driver’s and passenger’s faces. In addition, the “bare” propeller blades, rotating at two thousand revolutions per minute, could chop into a small ratatouille all living things. 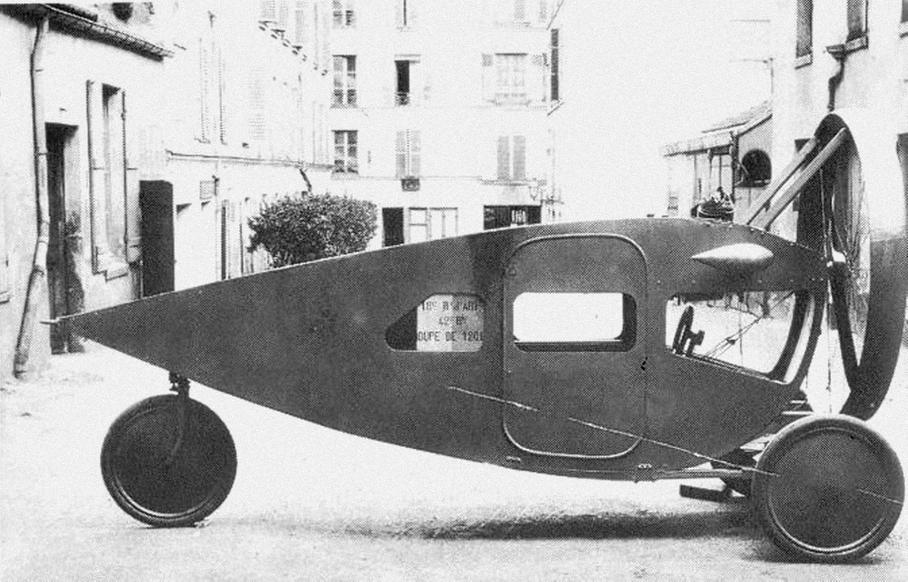 The second version of the Ellicosikle that went to war

The latter problem, however, was solved quite simply. In 1914, Ley produced a significantly upgraded Ellicocycle with a protective cover for the propeller, which, moreover, made the airflow more directional.

Meanwhile, the first large-scale armed conflict in the history of mankind broke out in Europe, where the latest technical means were used. The Helicocycle also went to war. History, unfortunately, is silent about its military merits, but it is known for a fact that the vehicle was attached to the 42nd Battalion of the First Artillery Regiment.

The inventor of the “airplane car” himself, of course, was assigned to serve as an engineer in the French Air Force, where he nevertheless finds time to further improve the design of the propeller car. 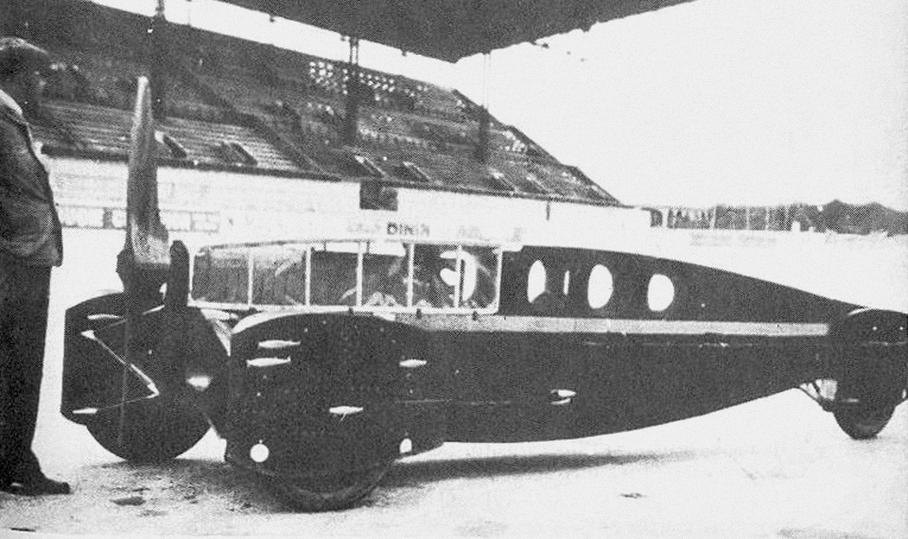 The first marketable version of the Leyat Helica

On his return from the war, Leyat registers a car company in his own name and creates a new model called the Helica. The car finally gets a second wheel, which not only gives it stability and makes it look like a car and, most importantly, allows it to get the necessary certification from the authorities.

If it wasn’t for the huge “fan” in front and steering by means of rear wheels, the Helica would be typical representative of its time – with a spar frame, front suspension on quarter-elliptic leaf springs and rigidly fixed rear. At the same time, due to its wood-plywood construction, the machine weighed less than 250 kilograms – lighter than many modern road bikes. 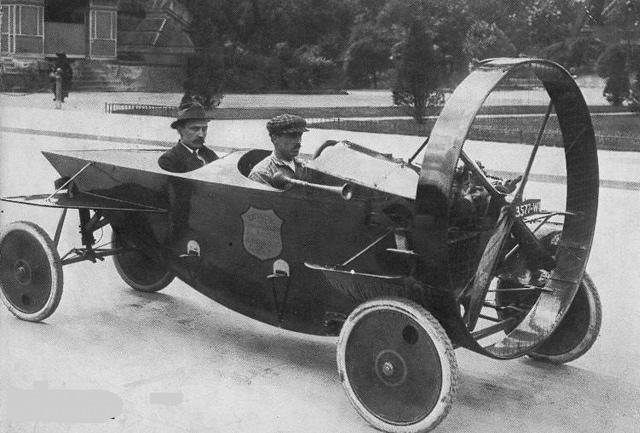 Three examples of the Elika in the courtyard of the Leyat workshop in Paris. One-tenth of all machines built there

The car was still powered by the same ABC twin-cylinder engine. A huge 1.4-meter propeller, which spun up to 1,800 rpm, allowed the Elika to reach 100 kilometers per hour. The machine was controlled by the rear wheels, which rotated together with the axle connecting them.

The world debut of “airplane cars” Leyat was held in 1921 at the 16th Paris Auto Show, where were brought two “Elika – with open and closed body. The latter was considered more comfortable, as the driver and passenger did not need to wear a helmet and aviation goggles to ride. 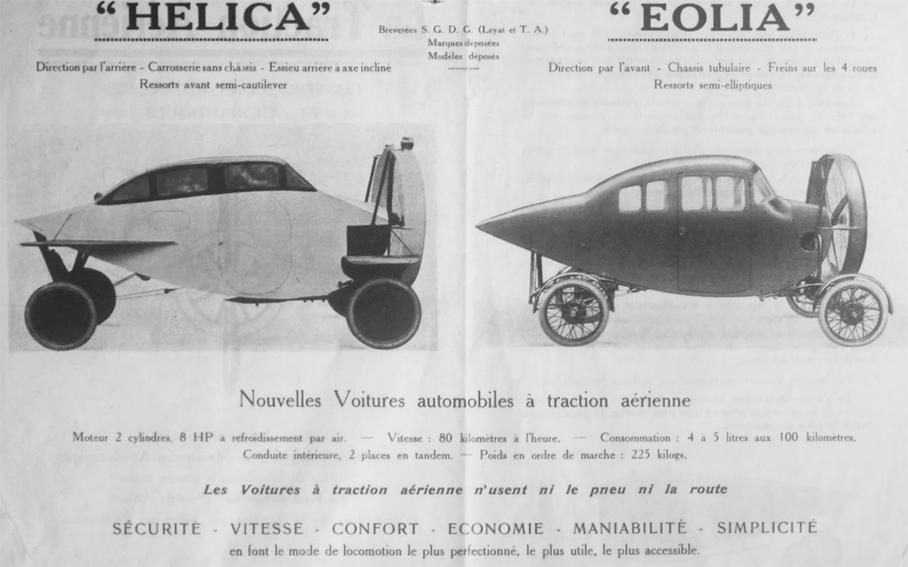 The advertising brochure for the Helica and Eiola models urged visitors to pay attention to “a safe, fast, comfortable, reliable, maneuverable, easy to maintain and economical car with fuel consumption of only four to five liters per hundred kilometers.”

The public couldn’t pass by “planes without wings” and the company Leyat even received many orders, the vast majority of which, however, and was not destined to fulfill.

The automotive world was inevitably ushering in a new era of standardized steering, metal bodies, and powerful multi-cylinder engines. The ABC, JAP and Anzani airplane-motorcycle units in which Leyat had so much faith were becoming hopelessly obsolete. And Leyat’s mechanics, who actually made piecework products by hand, could not compete with the industrial output of other more reputable firms.

One day Leyat met an old acquaintance and part-time customer on the street, who complained that his Elika was idling in the garage. His wife made him “stop fooling around” and buy an Amilcar, like “all normal people do. Maybe that’s when Leija was finally convinced that his brainchild was nothing more than a daring venture and went back to what he did best – designing airplanes. 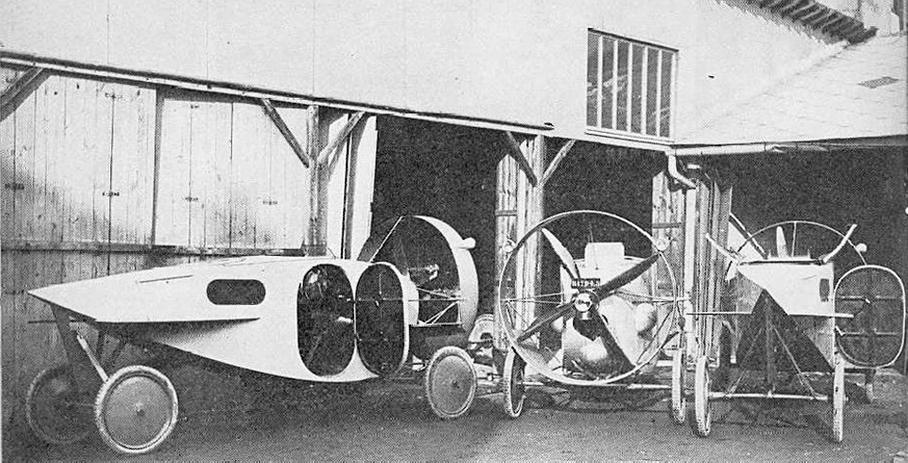 In all, about 30 Leyat propeller cars had been assembled and sold by the mid-20s. But in the twilight of his automotive career, Leyat produced two even more unusual cars. In 1925, the engineer designed a versatile “Elika,” capable of driving both on the ground and on rails thanks to special railroad wheels. The car was sent to the French Congo, where the head of the local diamond mines was inspecting his properties. 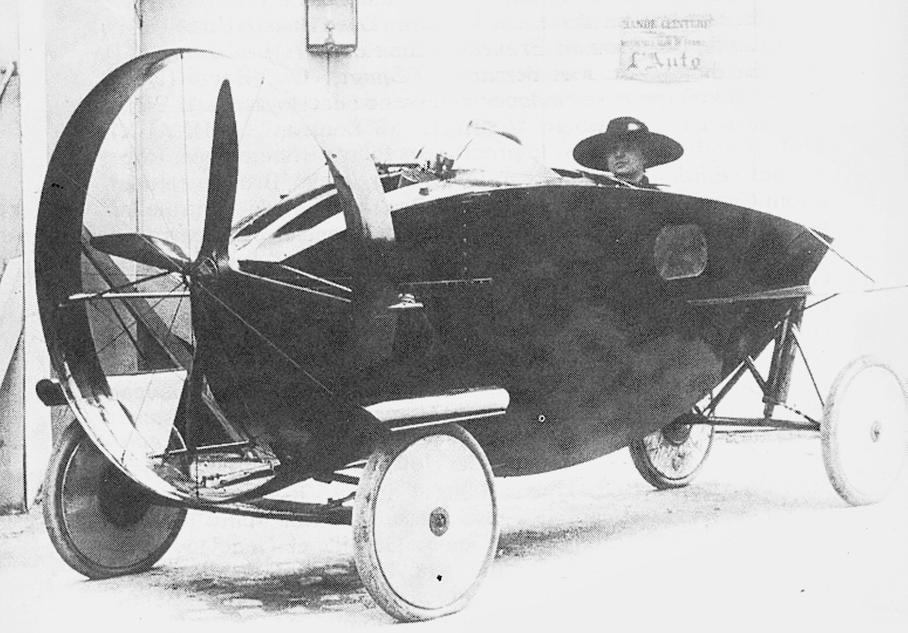 Leyat’s last car was an experimental racing Elika, which in 1927 reached a record speed of 170 kilometers per hour on the Montleri circuit near Paris. The pilot then admitted that he could accelerate even faster, but he was afraid to take off. The car with the propeller stubbornly strove into the sky.