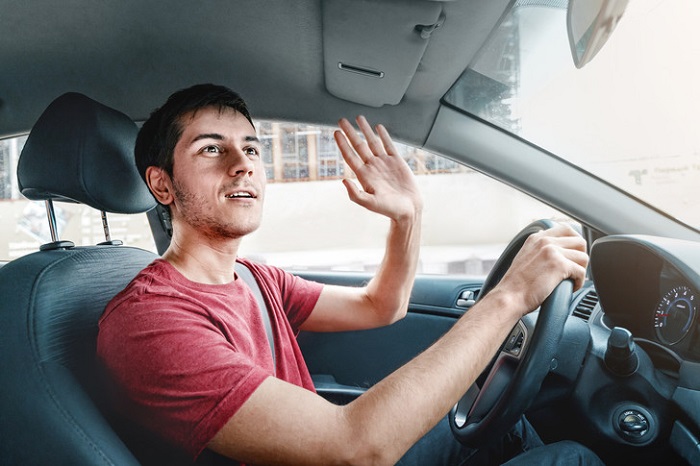 Motorists, undoubtedly, are a certain kind of caste, which has its own unwritten traditions and rules. Among others, they developed a whole system of communication between each other while driving. An experienced driver is sure to be able to distinguish the meaning of a klaxon message from the blinking of high beams. And to know these unspoken rules is not only honorable for any motorist, but also extremely useful, because they can not only facilitate the passage of the road behind the wheel, but even to save from a lot of trouble or danger.

The triangle button on the dashboard of the car is a frequently used tool for non-verbal communication between drivers. Its original function is to warn other drivers that the car is not standing still for nothing, but because of a breakdown. The unspoken signals, which acquired emergency lights, is, for example, an expression of gratitude, if you miss on the road or help during the movement of another way. And also a triangular button is used, if they want to apologize for creating an awkward or uncomfortable situation.

Another of the list of common signals among motorists. If the driver of a passing car briefly blinks beam headlights, it means that he as if said: “Pass” or “Skip”. There is another meaning of this signal: it is addressed to indecisive or hesitant drivers at intersections and exits from yard zones to encourage them to action.

High beam headlights can shine a long signal. However, drivers do not like to see him, because if they see it behind them, it means “quickly give way”, and they are considered too slow on the road. This method of communication is considered almost rude, so it is undesirable to use it without an absolute necessity. However, there is another meaning of the long high beam: if you are given this sign from the oncoming lane at night, it probably means that you also have the high beam on, which blinds the drivers opposite.

Perhaps there is no person who happened to be somewhere on the domestic highway, not seen this phenomenon: a lot of cars from the oncoming lane briefly blinking their dipped beam. This method is the most popular solidarity symbol between motorists, and all because in this way they warn each other about police ambush on the road, approaching traffic police post or video camera. The main thing is not to get carried away with this process, because if you blink for ten kilometers from the post, no one will thank you for this – it is enough to warn the drivers a kilometer and a half away.

Switching on of turn signals during overtaking.

Motorists often use their blinkers while overtaking. Usually in this way to communicate the desire to perform this maneuver so as to avoid dangerous situations on the road. But if you are in front of a country on a two-lane highway truck driver turns on the right, the left turn signals, but no going to overtake anyone, then this signal should be taken seriously: if the truck blinks left turn signal, then no way you should not start overtaking, because there is a danger of oncoming traffic, but once you have included the right turn signal, then the road is available.

A much less studied, but still very important variation of communication at the wheel is the system of motorists’ gestures. There are dozens of different signs, which can help to say something to the other driver. Here are a few examples: for example, a raised left palm is a common polite thank you for, for example, the same warning of an ambush by police officers ahead. If a hitchhiker is pointing at your car, it means he’s noticed some problem you might not even be aware of: a flat tire or a not fully locked trunk.