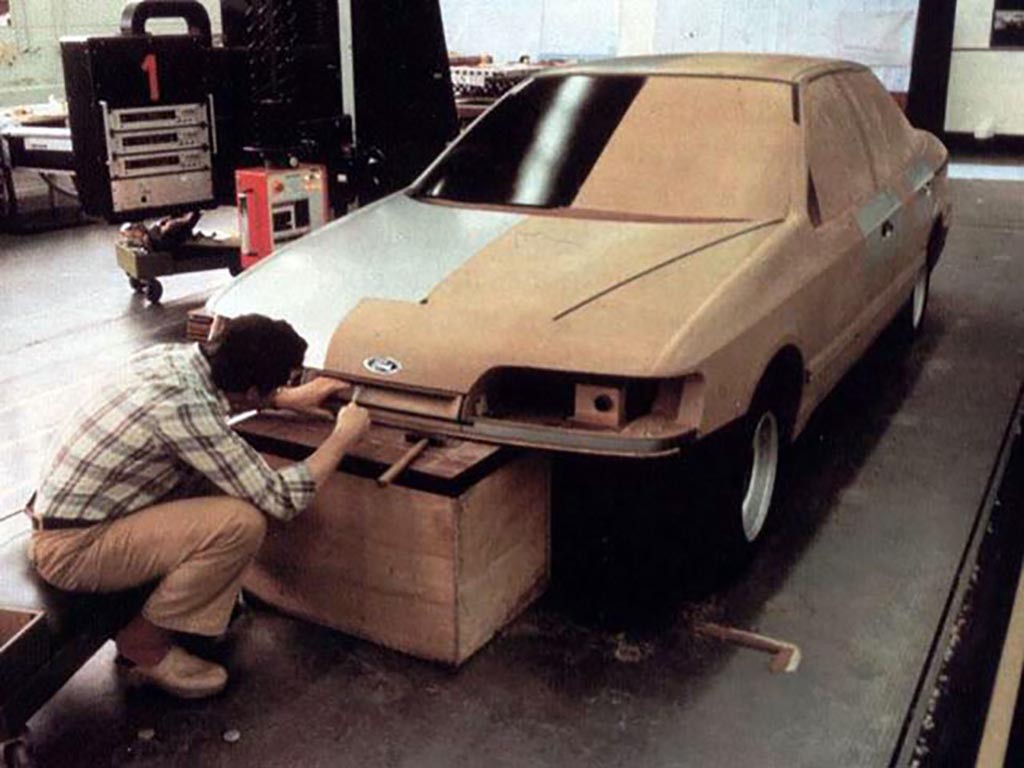 MYTH 1: Development of Scorpio started back in the seventies

In the late seventies, almost all cars were angular, and some hints on the forthcoming transition to rounded forms could be caught only in rare concept cars of that time. The flagship of German Ford Motor Werke AG, the Granada MkII, which was produced since 1977, did not differ from the majority of its peers by its flat-parallel design, and was quite a successful model in Europe.

While the Granada looked quite current at the time of its release in 1978, by 1985, its appearance was clearly outdated.

Nevertheless, practically right after Granada’s release, the company thought about the development of a brand new car, which would be more technologically advanced and economical. That’s why already in 1978 the Germans began a new project, called Greta.

What’s more, Patrick Le Kemann also worked on the design and then became Renault’s chief designer, creating a number of extravagant models like the Twingo, Avantime and Vel Satis.

Looking through the prism of three and a half decades since the Scorpio came out, one could argue that Uwe was simply ahead of his time, or rather, predicted trends almost a decade ahead. However, in addition to Bunsen, five hundred (!) more engineers took part in the creation of the new model, making sure that it was not only attractive externally, but also spacious inside, providing the owner with a high level of comfort.

Three hours on the tachometer: the CL version was frankly modest

To be fair, stingy Europeans were in no hurry to take advantage of the extensive list of options, buying just “a lot of car for their money”.

At the same time, the owners of early cars noted: the interior was subjectively better in comparison with the later Scorpio. Taking into account the design of the body it could explain the fact, that the big hatchback immediately became European car of the year 1986, surpassing even “one hundred and twenty-fourth” Mercedes.

Base Scorpio 1.8 CL cost exactly half as much as 2.9 Ghia version.

In fact, the first European buyers of Scorpio, according to the company Ford, were the representatives of upper middle class – that is not bad earning “white collars”, but not top managers. And, of course, the same E-class from Mercedes was still more prestigious.

MYTH 4: The Ford Scorpio wasn’t sold in England or the US

BOTH A MYTH AND A TRUTH.

There is an opinion, that Scorpio was a continental car, which was bought in Germany first of all, and it was not delivered over the ocean or even to England. Probably, such legend is connected with one interesting feature: this model has kept its old name Granada in Great Britain and Ireland.

Granada Scorpio was offered with different types of bodies.

However, except for a natural right-side location of controls, such Granada differed from the European Scorpio only with another line of options, causing confusion even at owners. Amusing fact: top version in England had the name… Granada Scorpio! But it in no way cancels the fact that automobiles with white-yellow numbers met in Foggy Albion not less than in Germany. Another historical fact: The white Ford Granada, made in 1987, was used by Princess Diana herself for her trips.

In Her Majesty’s Service: The Granada was a favourite vehicle of the British police forces

Due to naming difficulties in different markets, the Ford Superio was formally on sale only in continental Europe, but in fact it could be found under different names in dozens of countries, including America.

As for the US and Canada, here the Scorpio since 1988 was also sold under the name Merkur Scorpio. And the car was differed from the “Europeans” by its optics, bumpers, bodykit, and very rich equipment, which even had a climate control.

Scorpio, but not Ford: Merkur’s lights and bumpers corresponded to the North American standards, and in the USA the car was offered with manual transmission.

But, unlike England, Americans did not like Merkur Scorpio, as they say, not very much. Almost in three years they could sell only 22,010 Mercurian Scorpions, the planned 15 000 copies a year. It did not help even that Merkur Scorpio Touring Edition was awarded by the title “One of the best cars of 1987” from male edition Playboy. Probably, the reason was its cost in 26,405 USD, which is equivalent to present 56,878 USD.

In the maximum configuration of Touring Edition American Merkur looks decent even today.

The second probable variant of the market failure is weak marketing, because due to the lack of advertising, neither potential buyers nor sellers understood what the Merkur brand was and where it came from.

MYTH 5: The Scorpio was not a very safe car because of its propensity for corrosion

Because the car didn’t get galvanised bodywork and the metal was only protected by paintwork against the weather, cars rusted quite well – especially in the damp British climate or European port cities.

Accidents involving used (and rotten) Scorpions formed the view that the car was not very good at holding the impact.

In reality, however, the high degree of passive and active safety was built into this car at a structural level, as it was one of the few at the time to receive computer-calculated front and rear deformation zones, as well as door bars.

Let’s not forget the airbags, which were a rarity on the European peers of that time. In addition, all Scorpio, regardless of equipment, were fitted with four-wheel disc brakes, and anti-lock brakes (ABS) were standard equipment.

It is therefore not surprising that this Ford was rated on a par with the Mercedes-Benz W124, Opel Omega and Toyota Camry in terms of safety, second only to the Volvo cars. Though, in 15-20 years, it was more important the condition of a body of a certain car, but not its initial potential.

MYTH 6: The first-generation Ford Scorpio could be equipped with a radiotelephone

In those years, radiotelephones were seldom found in the flagship models of the “first echelon” – Mercedes, BMW and Jaguar cars. And for many, the phrase “a factory radiotelephone in a mid-eighties Ford” may sound like a joke. Nevertheless, you could find this ‘luxury item’ with its own catalogue number in Ford Cars catalogues.

The handsets were manufactured by third parties, Motorola and Panasonic, although the handset itself, of course, bore the Ford logo. The handsets were installed to the right of the centre console or in the armrest, fitting nicely into the interior and allowing the owner of the car to always be in touch, while remaining a real exotic for Ford cars.

In addition to the radio telephone, early Scorpios had another unusual option – in-car headphones, which were intended for the rear passengers.

Two sets of wired headsets could be connected to the audio system at the same time, allowing the rear passengers to listen to music without disturbing the driver to concentrate on driving.