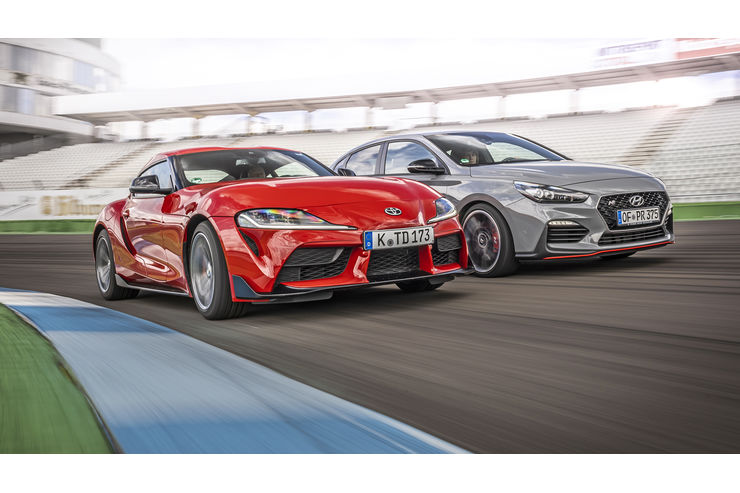 There is no point in looking for heroes. But you can trust them to find you. What sounds like a small variation of a quotation from the great writer and soccer expert Nick Hornby is – well – just a small variation of a quotation from Nick Hornby. It is an explanation of why we stand in front of a Toyota and a Hyundai, full of enthusiasm and in the tentative morning light. Both brands have long been unsuspected of their fascination with automobiles. And now? Do they have i30 Fastback N Performance and GR Supra 2.0?

It was – we remember exactly – a Thursday in July 2017, the 13th, that Hyundai presented the i30 N. Despite all the marketing hype and Nordschleife test cheering, it was as great as promised. Even more: With the i30 N Hyundai succeeded in creating the wildest, hottest hot hatch.

Since October 2018 it has been available as a fastback, and since the beginning of 2019 only in the 275 HP performance version. Just the fact that for 180 Euros you can have a strut spaxed into the trunk to cover the suspension struts shows a nonchalance that you can’t develop according to specification – something like this develops from enthusiasm. There are four fixed modes and a fifth one to configure the seven parameters that vary the characteristics of shock absorbers, steering, ESP, throttle response, e-lock diff, as well as the speed adjustment and the flaps in the exhaust – although this does not always lead to better results than the N-mode, which is fully rigged for dynamics. But it does give the pilot the illusion that the car is perfectly tuned to his own needs and abilities.

In the i30, there is a launch control for cavalry starting, large speed lights with gear shift lights like in Formula 1 and an LED-illuminated area of the rev counter that moves further back as the engine warms up.

There is also a launch control for the cavalry start, large speed lights with switch lamps like in Formula 1 and an LED-illuminated area of the rev counter that moves further back as the engine warms up – a folklore whose tradition was founded by the M models from BMW. In short, the i30 N was immediately something special: a hero, but not a dream car. Even as a fastback, it is not only suitable for everyday use, but also accessible. If we do not own it ourselves, it is only due to our lack of determined courage.

Or is it? Appearance GR Supra 2.0 Some time ago, Toyota boss Akio Toyoda declared that there would be no more boring cars of his brand. Look, you think, and that they still have a long way to go with the Corolla. But not with the Supra. The Supra takes over the BMW Z4 engine and all the technical equipment – a very excellent basis. And it’s a testament to the art of the Toyota engineers that their tuning made it even better.

The four-cylinder with 258 hp/400 Nm has a different set-up than the Supra with the three-liter. This is due to the official 100 kg extra weight of the six-cylinder, which extends further into the front, but according to our measurements only 42 kg of which remain in favor of the four-cylinder. More important than the weight is the balance, which could hardly be more ideal: 49.9 : 50.1.

In the i30 N, it is 62 : 38. Its balance is more evident in the way it accommodates all kinds of everyday needs despite all its dynamics – with four doors, a large tailgate and the large, variable luggage compartment. Everything else is included, from Isofix at the rear to the inductive charging point at the front. This means it easily compensates for the scarcer assistance arsenal and the more rustic but very solid interior ambience. 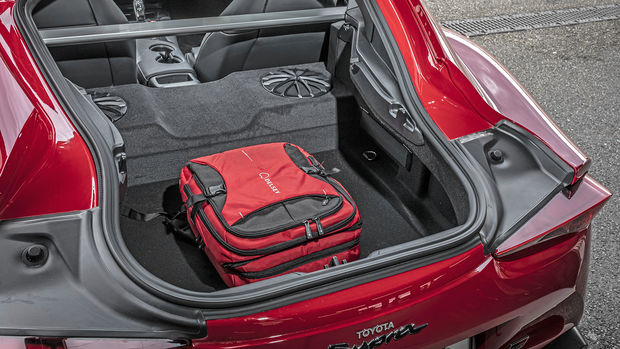 The stateliness of the Supra load space of 290 liters can be appreciated, but because of only 241 kg of load, it is seldom used completely.

With the Supra, we don’t have to spend a lot of time tracking down everyday talents: Seats for the pilot and co., which should combine a certain familiarity, a few shelves and a cargo space, whose stateliness of 290 liters can be appreciated, but which can rarely be fully used due to a payload of only 241 kg. The Supra scores a few points with its superb infotainment – BMW’s iDrive. But if it wants to win, it has to race for victory. So let’s start the engines.

One of the everlasting charms of a hot compact car is that it always makes you feel young and filled with the romantic naivety that life is always about the next corner. For this, there is currently hardly a better car than the i30 N, which boldly throws itself into corners, clawing into the line with the front wheels while the rear axle follows the front or pushes outwards to change loads. The E-servo motor of the very direct (12.3 : 1) steering is located on the steering gear for faster response and greater precision. It doesn’t let you miss a thing, not a turning point, not a moment when you need to counter-steer, but also not how much the drive pulls on the front wheels despite modified axle geometry, how often they struggle for traction, despite electronically controlled differential locks.

If the range of adaptive dampers is limited to variants with chattering teeth for comfort, the range of the powerful two-liter turbo goes further. After a slight boost boost rattle, it pushes vehemently from below, soon puffed up by 1.2 bar overpressure and a lust for torque that only ebbs away above 6,000 rpm. Finally? Yes, because then it’s time to shift the next of the six perfectly stepped gears of this grandiose, precise transmission.

So what do you think the Supra should be able to do even better? Well: everything, actually. But differently. 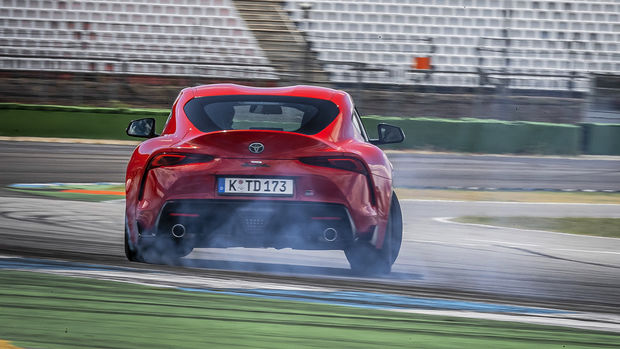 The Supra is not a sporty car, but a sports car. You notice this right away when you put it in: low, centered, on seats that are firmer. You can feel how differently it drives when it gets out of a parking space – with rear-wheel drive.

The Supra doesn’t have all the wild, cheeky and superficial features of the i30 N – and maybe it doesn’t need them. It is not a sporty car, but a sports car. You notice that right away when you put it in: low, centered, on seats that are more stable. You can already feel how differently it drives when it gets out of a parking space – with rear-wheel drive. It’s the Supra and its balance that characterize it and make the difference – not the fact that it accelerates more vehemently with the same weight despite 17 hp less. This is also due to the eight-speed automatic transmission with short lower and long upper gears.

If the appeal of the i30 N always lies in the fact that you are sometimes not quite sure whether you are skirmishing with or against it over country roads, the Supra is characterized by the harmony with which it drives – so light, so soft, so direct. The front wheels lock into the bend and the rear wheels push in – traction-assisted by the active rear axle differential, which distributes torque to the rear wheels steplessly and depending on steering angle, yaw rate, engine speed and accelerator pedal position.

It promotes a perfect, neutral balance that drifts into easily controlled oversteer as you step on the gas. Also because of its Torque Vectoring, there is no understeer in the Supra. And, of course, there’s no tugging in the steering, which is a little less direct (15.1:1) but still gives more precise, sensitive feedback. This means that the Supra is more agile, neutral and simply faster than the i30 N even on the handling track. With the rangel you get more over the track, in tight, slow curves it pushes with the heavy nose into understeer, never lets itself be held so easily on the line as the Supra. 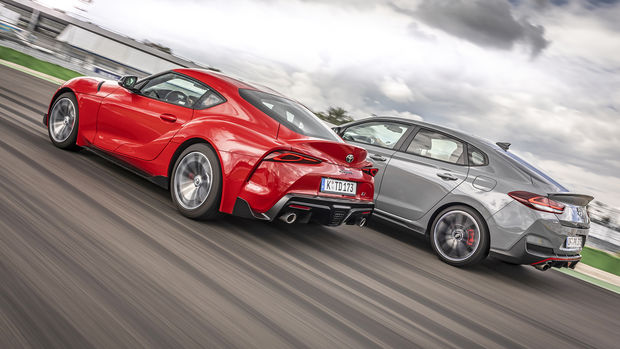 The Supra costs eighteen thousand eight hundred and four euros more. This is what makes the test decide in favor of the Hyundai.

Despite its tight tuning, its chassis with adaptive dampers and two characteristic curves avoids ruffle, and in the comfort level offers suppleness even for long journeys. The Supra brakes more vehemently than the i30 N, consuming less in the test (8.7 to 9.5 l/100 km). The two-liter turbo with electronically controlled wastegate valve makes less noise and more pressure. Together with the absolutely unerring automatic, the drive system achieves a brilliance of which you first have to decide whether you want to admire it more for its vehemence or harmony.

Now would be the time for a quiet But, you think. Well, it rather roars at us: Eighteen thousand eight hundred and four euros the Supra costs more. Only then does the test decide in favor of the Hyundai.

But that can’t be the end, do you think? That’s right, we have a solution for all Supra fans: 2022, because in two years the Toyota will have lost almost exactly its price premium and will probably cost as much as the i30 N Fastback now costs as new. Will the Supra still be as heroic in two years as it is now? Well, sure – the hero, what he promises.

It may be one of the hottest compacts, but compared to the Supra it only runs lukewarm. Despite much more space and everyday use, it only gains through its lower price.

Our new sports car hero? The Supra. After the first corner you know that it’s worth all the money: great handling, fast, efficient, not even clumsy in everyday life.