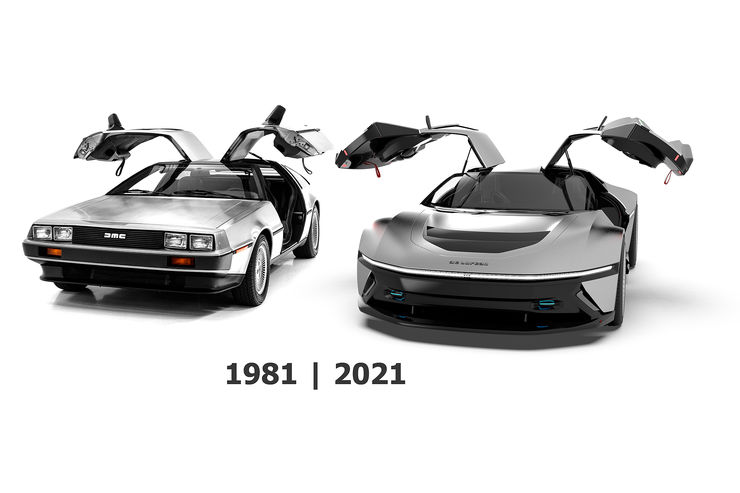 Car designer Angel Guerra has worked for Rimac, among others. Now he is presenting a new DeLorean for 2021 – and he is also hoping for a fourth part of “Back to the Future.

Technically not a great success, the DeLorean DMC-12 would probably be a rather unknown car today if three films hadn’t made it famous: Director Robert Zemeckis had the Northern Irish wannabe sports car work as a time travel machine in his science fiction trilogy “Back to the Future”. The moment Angel Guerra saw the DeLorean roll out of a truck in the film, he wanted to become an automotive designer.

Gullwing doors are one of the most distinctive features of a DeLorean (pictured is the new design).

Guerra has now been an automotive designer since 2008, and in the meantime he has worked for several manufacturers – most recently for the Croatian manufacturer Rimac, which specializes in electric supercars. Guerra himself lives in Seville, Spain. An ardent DeLorean fan to this day, he is now presenting his version of a new DeLorean for 2021 – after all, the original DeLorean DMC-12 came onto the market in the spring of 1981: Guerra wants to celebrate the car’s 40th anniversary. And secretly, he’s even hoping for a fourth installment of Back to the Future.

Here, the designer offers a glimpse of the interior: sport bucket seats provide lateral support for the occupants.

Dissatisfied with the designs of others

Angel Guerra has used his spare time over the past three weeks to design the new DeLoran – he calls it the DeLorean 2020 40th Tribute. Time and again, he has looked at others’ ideas for a visually worthy DMC-12 successor – not a single one has convinced him. And there have definitely been serious attempts at reviving the brand. For example, when GM dissolved its Pontiac subsidiary brand in 2010, there were efforts to continue building the Pontiac Solstice as a DeLorean with a slightly modified body. Ultimately, the Solstice was quite well received by customers – GM also sold the Kappa platform-based convertible as the Opel GT, Daewoo G2X and Saturn Sky. However, nothing more than a few drawings came out of the project. Guerra based his design on modern design, and his work at Rimac clearly influenced him – after all, the new DeLorean is also to be an all-electric supercar.

13 original DeLorean DMC-12 and in the foreground the DeLorean 2020 40th Tribute drawn by Angel Guerra.

For the DeLorean 2020 40th Tribute, a form designed with clean lines was important to Guerra. A band of LEDs running all around visually divides the vehicle into top and bottom. Of course, the body of the new model, like that of its prototype, is made of brushed stainless steel, and just like the original drawn by Giorgetto Giugiaro, the new DeLorean also has gullwing doors. The black side stripes and turbine-design rims also pay homage to the original. The new car is 4.78 meters long, a generous 2.04 meters wide and 1.14 meters flat.

The moment Angel Guerra saw the DeLorean DMC-12 roll out of a truck in the movie “Back to the Future,” he wanted to be an automotive designer. Here, he recreated the scene with his own design.

Two powerful electric motors positioned on the rear axle are responsible for propulsion. The Spanish designer also gives the car high-tech equipment in other respects: for example, two lidar sensors are to provide data for autonomous driving. Many other sensors are hidden behind the black side strip. Guerra wants the technology in his DeLorean to be affordable. And he dreams of a new episode of Back to the Future in which his DeLorean acts as a time machine – for which he has also drawn design sketches. 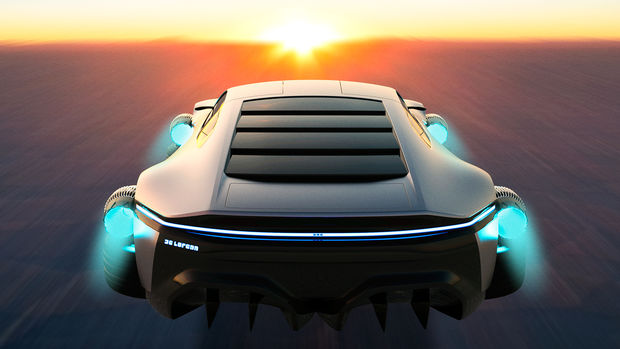 Angel Guerra designed the 2020 DeLorean 40th Tribute partly as a successor to the DMC-12 and partly as a new time travel machine for the hoped-for fourth installment of Back to the Future.

Yeah, I’d love that one.

Nope, I don’t need this one.

All may have been said about the original DeLorean DMC-12, but the car has remained an object of fascination due to its dramatic failure and appearance in the Back to the Future trilogy. Still, there have been only a few half-hearted attempts to develop a worthy successor. Spanish designer Angel Guerra has now designed a serious DeLorean DMC-12 successor.

His DeLorean 2020 40th Tribute is a modern interpretation of the original model as a clean-lined coupe. The gullwing doors and stainless steel body are the obvious connecting features to the original. Guerra’s DeLorean also fit into a fourth part of Back to the Future – fans have been discussing such a sequel for decades. However, Hollywood has not yet given any concrete indications of this.