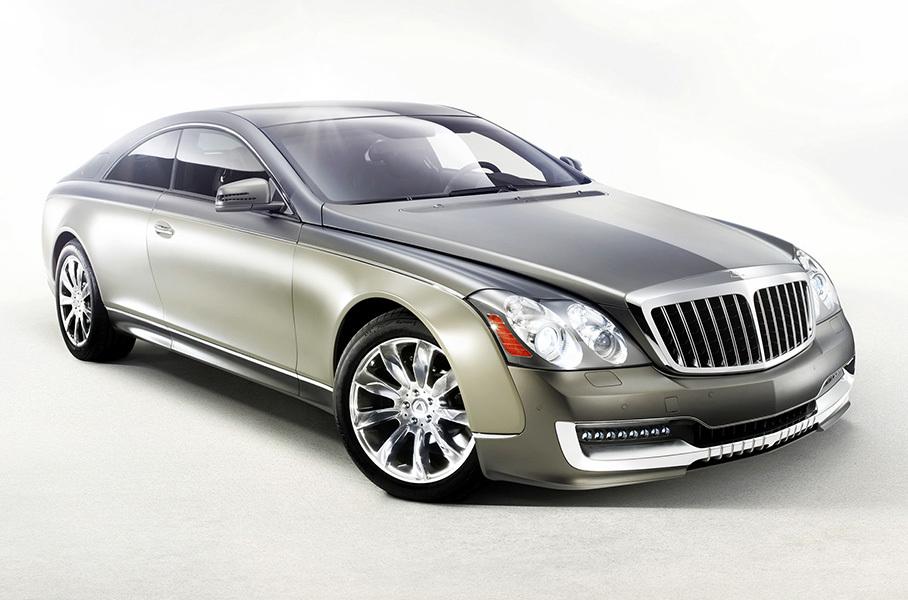 In March 2008, the Rolls-Royce Phantom Coupe was unveiled at the Geneva Motor Show, a 6-metre-long road yacht with a back row more spacious than any tourist bus. And the company Maybach, which at that time still felt normal, did not react to this fallout in any way – unless you count the concept car Exelero, created together with Fulda tire manufacturers. Looking at the success of the two-door Rolls, including the open Drophead Coupe, the Maybach brand definitely should have tried to create a coupe.

Partially this gap was filled by Xenatec, which built several refined two-doors on the basis of short-wheelbase ’57 Maybachs. And the approach to each car was the most delicate: the coupe got new bodykits, sportier seats, widened wheel arches, and most importantly – approval from Daimler. Moreover, Daimler provided Xenatec with the original drawings, so the studio took into account all the nuances of Maybach’s design. No wonder that such a thorough approach resulted in an immodest price tag: the cost of the coupe started at 650,000 euros. It was planned to produce 100 such cars, but due to a weak PR campaign, Xenatec built less than 10 coupes – which can cost over a million dollars these days.

Nissan GT-R is an outstanding car, but impractical: you can sit in it from behind only with chin pressed to the chest (and only if there are schoolchildren on front seats), and you can put only a box of Christmas toys and a couple of garlands in the trunk. Thus, Nissan does not have more practical car, but with GT-R characteristics – if not to count Juke-R. But tuners can mend this omission, having created something like “Hetera for dacha owners”.

There are several designs of GT-R Wagon, but all of them are plus or minus similar and use Nissan Stagea with M35 body as a base. The most aesthetically advanced version in 2010 was presented by Kids Heart – the Stagea got not only the front end from the GT-R, but also a distinctive rear bumper with a pair of “double-barrelled” exhaust pipes. Back then, as Kids Heart said, the car was only half-ready – the plan was to install a 485-horsepower VR38DETT motor and a GT-R transmission. Whether they were able to implement the plan to the end, history is silent, but the five-door GT-R looks great.

The all-wheel-drive and turbocharged BRZ STI has been awaited ever since the conventional BRZ was born. The company Subaru played up to this expectation in every way possible: they would release a camouflaged prototype at Nürburgring, or present a concept car BRZ STI. However, BRZ STI has been produced for 9 years already and it is still there: the best that Fuji Heavy Industries has managed to do is several versions for STI, and even that in some chosen markets. And some fans of the brand are fed up with this waiting.

Australian Peter Dunn, who in his spare time loves to take part in rallies, has created a BRZ STI himself, pulling the body of the coupe on the transmission and engine WRX STI. And got a very unusual race car that meets the rally class G4. True, to get the BRZ STI, Peter had to completely redraw the bottom of the BRZ, make a new subframe and greatly expand the coupe, but the result was worth it. The first Evolution and STI were created exactly the same way – the compact models were transplanted “organs” of more powerful cars Mitsubishi and Subaru, respectively.

If Audi RS4 keeps Avant body from generation to generation, BMW M3 escapes from prefix Touring all its life. A factory station wagon M3 Touring has appeared only once for five generations of M3, and only in a form of a prototype. Fans of the brand for years have been begging for a high-speed compact station wagon to fight Audi and Mercedes, but the BMW management is sure that such a car will not be in demand.

Therefore, M3 touring cars are born in garages. The latest addition is the BMW M3 CS Touring, built by tuner Sander together with Eventuri. The car has already been at the SEMA and Essen Motor Show, everywhere it was greeted very warmly – now Sander is asked to build several more of the same. And he doesn’t seem to mind. As for the station wagon shown in the photo, it came about after Sander bought a wrecked M3 CS and a regular third series station wagon. The result of the crossing was a fighting “wagon” with a 460 horsepower inline six.

Since the 107th Mercedes-Benz SL has seriously grown fat and turned from a sports car into a luxury grand tourer. And judging by sales figures, that strategy was correct. Nevertheless, there were conservatives who wanted to see SL as sporty and light (as befits an acronym). And for them, Boschert introduced a special car in 1989.

Boschert B300-24 C Biturbo debuted at the Frankfurt Motor Show and was a shortened E-class with front from SL R129, and most importantly – the canonical “gull wing” doors. And such a car could not but stay unnoticed by the public – everyone wanted it! True, the real buyers didn’t find so many and Boschert sold about a dozen cars, most of which were without “gull-wings” (they were offered as an option – despite the fact that the base version of the car cost an exorbitant 165,000 DM). As expected for the heir of 300 SL, under the hood was not a heavy V12, but in-line six-cylinder 3-liter engine. Thanks to the twin-turbocharger, its output reached 320 horsepower, which was enough for a maximum speed of 274 kilometers per hour.