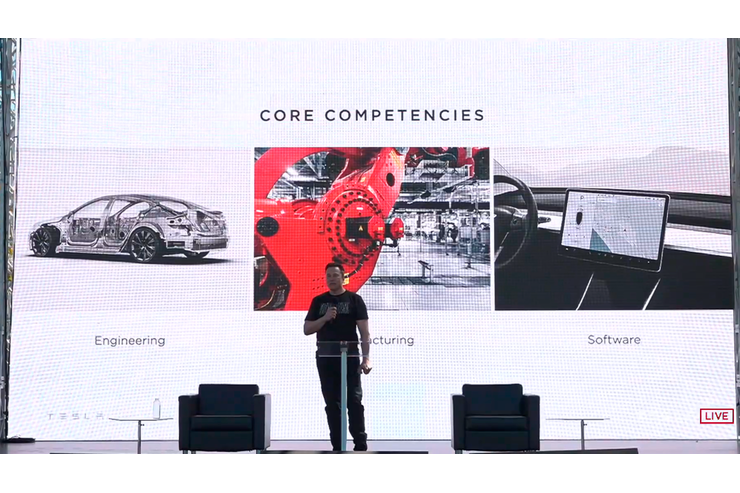 The Center of Automotive Management (CAM) has examined which e-car manufacturers have brought the most innovations with customer benefits into series production. Tesla wins ahead of VW, BYD makes a big leap.

The institute at the University of Applied Sciences (FHDW) in Bergisch Gladbach calculated the innovative strength of the automakers using an index value, according to the institute. In doing so, one has “systematically evaluated the innovations of electromobility (series) in the areas of range, consumption and charging performance with regard to the improvement of customer benefits, for this purpose “32 automobile manufacturers based on 291 innovations in the field of electromobility” in focus and (…) “calculated the innovation strength by means of an index value”.

The result from the CAM’s point of view: “Top innovator in the technology field of battery electric vehicles (BEV) remains Tesla by a clear margin – and there’s more to come (see image gallery. “Fast followers” are Volkswagen in second place, the Chinese manufacturer BYD in third place and the Hyundai Group in fourth place. In addition to BYD, Geely, BAIC and SAIC also make it into the top 10 of the most innovative BEV automakers, making it the first time that four Chinese automakers have made it into the top 10.”

Tesla extends its lead by 45 index points thanks to “strong innovations in range and charging performance” and “now comes in at a BEV innovation strength of 159 index points (IP). Volkswagen can confirm second place with 123 IP and an increase of 37 points, mainly due to high segment ranges and charging performance of the VW ID.3 as well as further innovations from Porsche (Taycan) and Audi (E-Tron). BYD (+23 IP) made a big leap to third place in the CAM ranking. The Chinese manufacturer owes this primarily to the BYD Han EV electric sedan. BYD thus clearly overtakes Hyundai in the study’s assessment. After high growth in the previous year, the Koreans could only be able to increase moderately in 2020 (+ 9 IP).

The most innovative automakers in e-mobility.

Of course, this may look very different again for 2021, because the index evaluates what went into series production in 2020. Hyundai, for example, has announced the Ioniq 5 with a range of 450 kilometers for 2021. Volume models such as the Mercedes EQA, for example, also play no role in the CAM’s 2020 evaluation, nor do BMW’s iX or i4, both of which are not yet available for purchase but will roll onto the market in 2021. Accordingly, Daimler and BMW only make it to 11th and 13th place, respectively. However, while Daimler is able to improve significantly compared to 2019 due to innovations in the EQC and EQV models (+ 11 IP), BMW barely made any progress last year from a CAM perspective (+ 4 IP).

How far along are the Chinese really?

There is a certain methodological difficulty: the researchers obtain their data primarily from the manufacturers and from press reports. Data accessibility is often difficult with Chinese manufacturers, different standards apply to consumption and thus the heavily weighted range, and the data is more difficult to verify. So far, for example, no one has been able to independently determine the range of the BYD Han; the car is not available in this country.

The press release points out that it is the e-mobility newcomers that are capturing the imagination of investors. Tesla is by far the most highly valued automaker at 692 billion euros, while Nio has a market capitalization of 72 billion euros and Xpeng already 28 billion euros. By comparison, Volkswagen is listed at 87 billion, Daimler at 63 billion and BMW at 43 billion euros (as of (Feb. 2, 2021). Stefan Bratzel, head of CAM, concludes: “Manufacturers’ electric innovations can boost their sales figures. For example, there are astonishing correlations between the innovation strength and the electric vehicle (BEV) sales of the car manufacturers. Among the top 5 OEMs with the highest sales are also four of the most innovative automakers in all-electric e-mobility.” 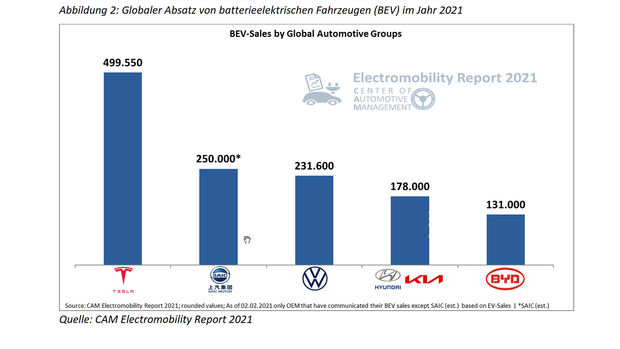 Who sold the most electric cars in 2020.

It should be noted that the VW Group as a whole, for example, also sold around 20 times as many cars (9.305 million) as Tesla in 2020, although not even half as many e-cars as the Americans. However, the Volkswagen Group is also making a big leap in e-cars, making it into the top 3 for the first time after ranking 6th last year. 231,600 electric cars sold represent an increase of 214 percent. The main drivers are the volume models VW ID.3, but also the E-Golf and the premium models Audi E-Tron and Porsche Taycan. The Chinese market is of immense importance for cars of all drive types. Tesla was already able to sell 135,000 vehicles there last year, the VW Group 3,849 million – after a Corona-related decline of 9.1 percent.

VW partner SAIC also does it with others

The SAIC Group, with which Volkswagen has a joint venture, comes in second in battery-electric vehicles with about 250,000 sales, according to CAM forecasts. The joint venture between SAIC, GM and Wuling, in particular, is driving up the SAIC Group’s BEV sales with low-budget models in the subcompact segment (e.g., Wuling Hong Guang Mini Ev). However, cost efficiency rather than innovativeness plays a key role in these models, he said. The Hyundai Group (incl. Kia) comes in fourth place with around 178,000 BEVs in 2020, with the Hyundai Kona EV as well as the Kia Niro EV being the sales drivers within the Hyundai Group – the Ioniq models of the future are likely to provide a boost, as are further MEB models at VW.

The second Chinese group in the top 5 is BYD, with sales of 131,000 BEV cars in 2020, illustrating the growing importance of Chinese manufacturers in e-cars.

“Incumbent automakers need to brace themselves, as significant innovation momentum can be expected in the coming years not only from Tesla, but also from e-mobility newcomers such as Lucid Motors or Chinese manufacturers Nio and Xpeng. Anyone who is late to the game when it comes to e-mobility is taking a high risk,” says study director Stefan Bratzel, assessing the situation.

I’m not putting my foot in it.

Sure! It’s got everything it needs.

Even if the CAM study comes with certain blurbs as to the actual impact of innovations for customers, especially among Chinese manufacturers, the ranking fits the current trend: Tesla is far ahead in e-car-specific characteristics such as range, while Chinese manufacturers are moving into the fast lane; developments such as the lithium iron phosphate battery in the BYD Han or the cobalt-free batteries from SVOLT, which will soon be produced in Saarland, in particular, make people sit up and take notice.