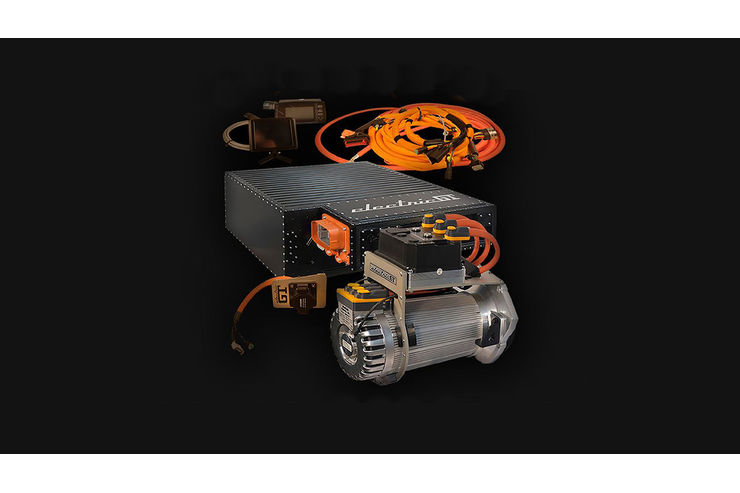 The US company Electric GT offers complete e-engines for self-installation. Among other things, these come in V8 form, but also in a reduced-power entry-level variant. Thanks to a technical trick, they even fit the original transmission.

In the summer of 2016, Electric GT presented a Ferrari 308 converted into an electric car. The previously half-burned-out “Magnum Ferrari” received a 246 kW / 335 hp and maximum 475 Newton meters powertrain with three e-machines and a 46-kilowatt-hour battery from the Californians. And on top of that, a sportily tuned chassis, modern brakes, a five-speed transmission from Porsche and a redesigned interior. In five seconds, the electric Italo sports car accelerates from zero to 60 mph (96.6 km/h), the top speed is above the 290-km/h mark, and Electric GT quotes a range of just over 209 kilometers.

Since then, the Californians have realized another electrically powered Fiat 124 Spider and started work on historic examples of the Toyota Land Cruiser and Ford Bronco. In the process, they’ve come up with an idea: What about taking the crate engine concept used by major U.S. automakers and adapting it to electric powertrains? Crate engines are engines that are shipped individually – packed in boxes – by carmakers to customers, who then install them in their actually less powerful cars. This principle is most common among quarter-mile racers – and could be of interest to people who want to convert their combustion engine to electric, right?

The electric Crate Engine is about 86 centimeters long and should therefore fit in the Toyota Land Cruiser.

But the creativity of Eric Hutchison’s team did not end there. At Electric GT, they had the idea of making the electric motor and its periphery look like an internal combustion engine. Like a full-blown V-engine with eight or more cylinders. Moreover, regardless of whether one or two electric motor(s) are used. The Americans promise a “plug-and-play solution with high performance that is virtually maintenance-free,” can be easily installed by an “average mechanic” and should fit many different car models. An old VW bus is soon to be powered by the electric Crate Engine, as are Ford’s classic Mustang and Bronco.

By default, AC-50 electric motors are used in the approximately 86-centimeter-long package (a small-block V8 measures about 74 centimeters) – and thus parts that are relatively common in vehicles subsequently converted to electric cars. AC-51 or HyPer9 counterparts are available on request. The single-motor variant produces 114 kW / 155 hp and delivers a maximum of 331 Newton meters. The data sheet of the twin-engine version states 179 kW / 243 hp and a maximum of 461 Newton meters. 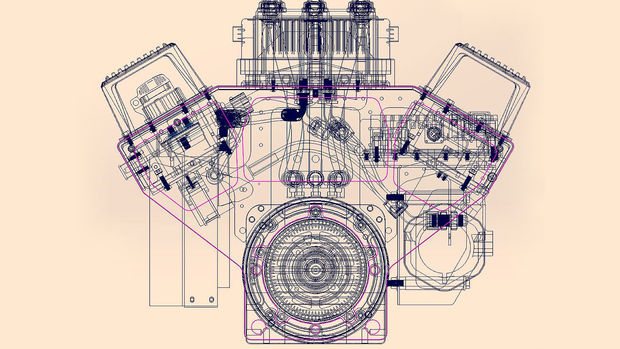 The motor already comes with almost everything necessary out of the box.

In the electric V-motor, whose housing comes from the 3D printer, almost all technical necessities are already included: Motor(s), controller(s), charger(s), sensors, relays and computer systems. What’s missing are the mounting brackets appropriate for the different models, but Electric GT has already developed some of these and can manufacture others to customer specifications. The engine is “pre-engineered, pre-fabricated and pre-tested,” the manufacturer says.

Customers will have to install the e-motor themselves, however; buyers will also be responsible for the battery. At least Electric GT provides installation instructions. The process is supposed to follow the following pattern: First, the engine block is hung in the chassis and coupled with the transmission before the cooling system and wiring harness are added to the interior. This is followed by the power lines to the battery pack and charging port, the cooling pump and heat exchanger, and then the thing should be up and running. Electric air conditioning compressors and heaters are available as accessories. 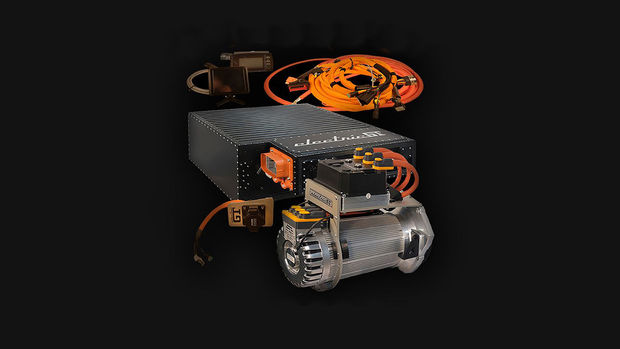 The “eGT173 Crate System” is the new entry-level e-drive for retrofitting.

For those who don’t need the V-engine look, Electric GT has recently introduced a new entry-level drive: The small-sized and single-motor “eGT173 Crate System” is primarily suitable for compact vehicles and delivers 122 hp and a maximum of 235 Newton meters. In addition to the control unit, charger and accessories, the package also includes a Tesla battery module with a choice of 25 or 35 kilowatt hours. The range specification is vague, however: The operating range is said to be between 113 and 241 kilometers.

Electric GT recommends coupling the motors to a manual transmission and already offers clutches, flywheels and adapter plates for this purpose. When choosing a transmission, it is important to ensure that it is designed for the usually higher torque of the electric drive unit. Such adapter systems are available for air-cooled VW and Porsche models as well as for transmissions from the Ford and GM groups, the Toyota Land Cruiser, various Volvo models and the T56 transmission from Borg-Warner, and cost around $1,000. Electric GT advises against automatic transmissions. Because they require an additional hydraulic pump and “because of the inefficiency of torque converters.”

The 155 hp and maximum 331 Nm GTe-253 Crate motor is available for $33,949 (the equivalent of just under 28,000 euros; excluding the battery). The eGT173 system costs $32,999 or $36,999 (a good 27,000 to 30,000 euros) depending on the battery selected. That sounds like a lot, especially since you still have to install the thing yourself. But for a complete vehicle from Electric GT, you pay about twice that. If you need help with the installation, you can get it from the Electric GT team. Or you can go directly to a specialist workshop of your choice.

A fine thing. I would definitely use it to convert my combustion engine.

Nonsense. I’d rather buy an e-car that was designed as such.

An electric motor in V8 form that can also be installed in many different car models by itself: Could be that Electric GT has combined the best of several worlds with its Crate Engine. However, installation is unlikely to be as simple as it seems. And everyone has to take care of the battery themselves with this variant. If you want the all-around carefree package including the battery, you’ll have to buy the new entry-level engine – or a complete vehicle from Electric GT.