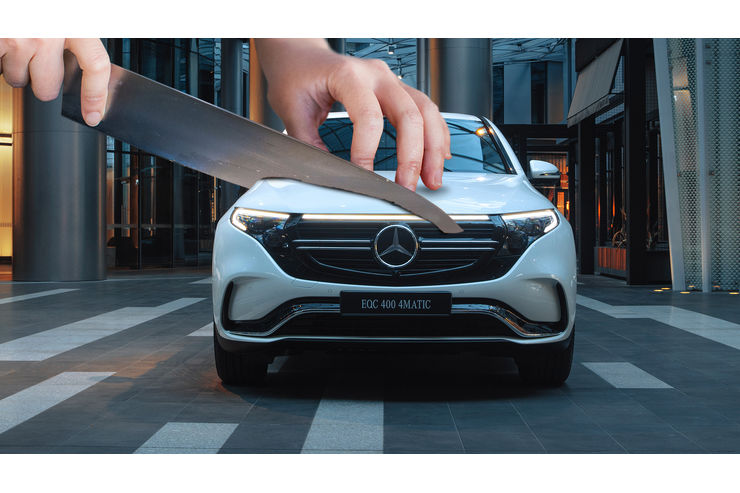 It took a year to complete the elaborate model. Now the exciting trainee project shows the inner workings of the Mercedes EQC electric SUV.

Let’s start with an appropriate phrase that I’m sure everyone knows: “It’s what’s on the inside that counts.” Now this probably applies to the world of automobiles as well, but not without restrictions. After all, many customers still make their purchase decision largely based on appearance. There’s nothing wrong with that, of course, but we also know that a car’s functionality is defined much more by what takes place under the sheet metal. In the case of a 21st century electric car, that can be quite a lot. As part of an apprentice project, 40 Daimler junior employees have now turned the innermost workings of the EQC electric SUV inside out.

A total of 15 meters of LED light treadmill illustrate the flow of electricity in the vehicle.

When you look at the left flank of the exhibit, you don’t notice anything at first, because this side remains in its original state. If you walk around the car, on the other hand, there are plenty of holes gaping in the bodywork. Using a total of 24 cutting discs and 23 grinding belts, the apprentices spent more than 100 hours cutting and deburring five pieces from the sheet metal. The openings reveal components such as the battery or onboard charger .

In addition, the apprentices also disassembled individual smaller parts per se. The front and rear headlights, for example, were cut in half, as were the charging plug and the charging socket on the car. When the plug is inserted there, a green pulsating LED light strip can be used to track the flow of current inside the vehicle body. A total of 15 meters of LED light guides are in the cutaway model.

Components of the car that are not specifically related to electromobility are also exposed in the glass EQC. These include the front and side airbags and the steering wheel. The latter is a particularly impressive demonstration of how many components this formerly very plain component now consists of. Gone are the days of wooden rims and thin metal spokes. But what can you now do with this EQC and its exposed innards? Well, on the one hand, the implementation of the project was associated with a lot of teaching material and knowledge for the current year of trainees. But subsequent years can also benefit from the work, because the cutaway model includes an augmented reality app. Using this application, individual components can be virtually cut up even further, and explanatory texts are displayed directly on the object. 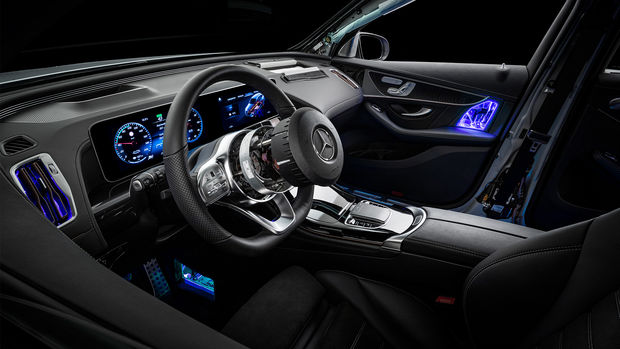 The trainees disassemble the steering wheel in an extra-specular way. It’s exciting to see how many components are actually inside.

To understand the basic structure of something, it makes sense to look behind the facade. How nice that Mercedes provides its trainees with an opportunity to do this. Not that their own vehicles have to be disassembled.