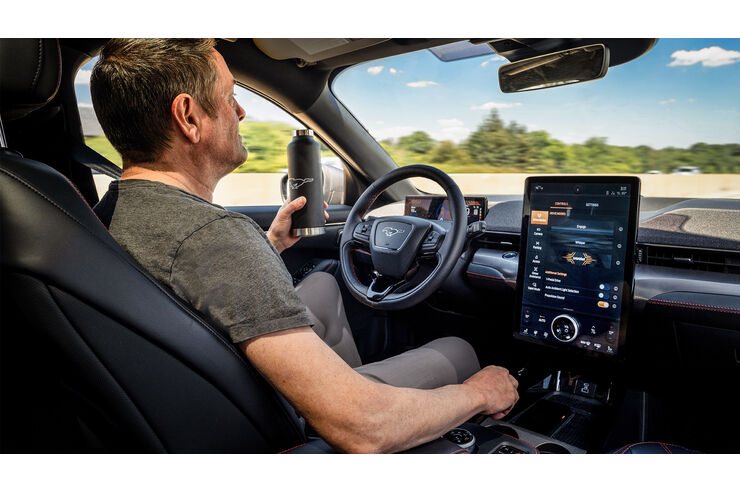 Ford is upgrading mightily when it comes to electronic driving aids. The systems, which have a new name and enable hands-free driving, will debut in the Mustang Mach-E and F-150 and then in other models.

Ford previously called its electronic assistance systems Co-Pilot; in the last expansion stage, the package bore the name “Co-Pilot360 Active 2.0 Prep Package.” The decision-makers in Dearborn have apparently noticed that this name is not particularly catchy. That’s why Ford is now calling the technology bundle that enables level 2 assisted driving “Blue Cruise. The brand is thus picking up on its nickname in the USA: Referring to the brand emblem, it is called “The Blue Oval” there. And Cruise is a common name in the U.S. for autonomous driving functions; competitor General Motors calls its technology “Super Cruise.

The first models to receive the new technology will be the new Mustang Mach-E electric crossover (here even standard in some model variants) and the current version of the best-selling F-150 pickup from model year 2021. However, other model series are then to follow bit by bit. If the cars have the “Co-Pilot360 Active 2.0 Prep Package,” they will receive a $600 (just over 500 euros) over-the-air update in the second half of the year. The software upgrade will give them the new Blue Cruise package and, as part of it, a “hands-free mode”.

This uses both camera and radar sensor technologies and builds on the adaptive cruise control with stop-and-go function, lane centering and traffic sign recognition. Blue-Cruise adds familiar variables such as emergency braking or parking assist and cross-traffic alert, and allows drivers to take their hands off the wheel – and not just for a few seconds, as currently implemented by competitors.

With the scope of the assistants, Ford wants to outdo the Tesla Model Y.

However, the system forces the driver to pay attention. An infrared camera detects the eyes and head position, even for sunglass wearers, according to Ford. So if the eyes fall closed, or the driver looks out the side window for an extended period of time, the system sounds an alarm, demands intervention or, if necessary, brakes the vehicle down to a stop.

The Traffic Jam Assist and Lane Keeping Assist systems have also been further developed. The former can now act more independently in stop-and-go traffic. Previously, the car had to be restarted manually after a standstill of more than three seconds. Ford has raised this standstill time to 30 seconds. The active lane departure warning system now also recognizes the edge of the lane on country roads without markings – provided there is a clear termination, i.e. a grass scar or simply earth. Ford also claims to have improved lane centering.

The revised lane departure warning system recognizes the edge of country roads even without markings.

For greater safety in the city, Ford has added an intersection assistant. This prevents left-turn accidents when oncoming traffic is approaching from the front. In the future, Ford also plans to implement a lane change assistant that is activated by tapping the turn signal, and a predictive speed assistant.

Only available in North America for the time being

Currently, the system works on about 100,000 miles (a good 160,000 kilometers) of the North American highway network. These “Hands-Free Blue Zones” are stored in the navigation system’s map material. As soon as the car reaches such a section, this is indicated to the driver in the instrument cluster.

Currently, the Blue Cruise technology is in the final testing phase, with Ford having already covered over 500,000 miles (just under 805,000 kilometers) with it on North American roads. Ford estimates it will equip about 100,000 vehicles with it in the first year. The extent to which it will eventually be usable by German customers, however, is still unclear.

No, sensor and computer technology are still a long way off.

Even if nationwide autonomous driving still seems a long way off, comfort assistance systems in vehicles are becoming increasingly common. Ford now wants to take the next step with the Blue Cruise system. If the driver causes an accident with it, he must have been extraordinarily talentless. Many of the systems are not new inventions by Ford, but there are some exciting developments. Hopefully, German customers will also benefit from them.