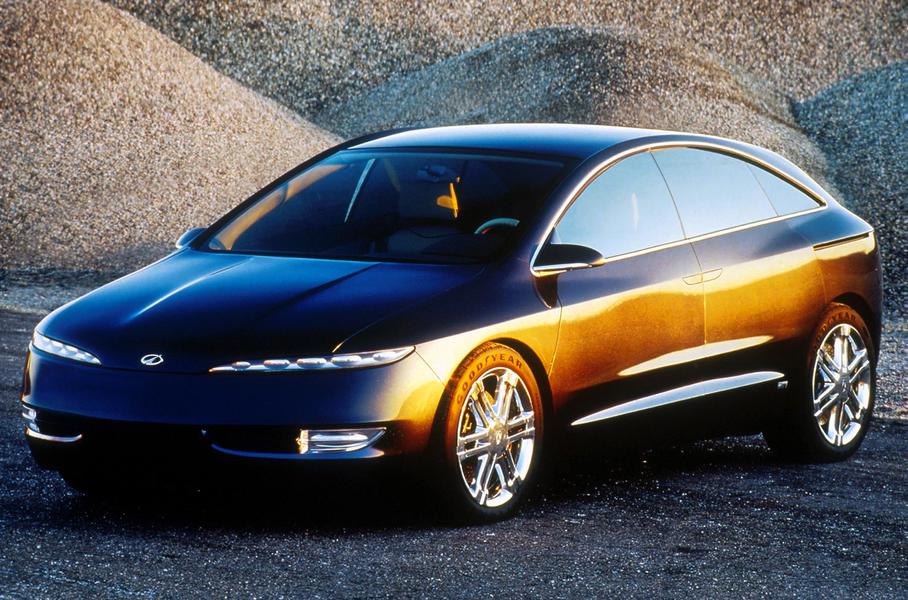 The destiny of Oldsmobile, which could turn 121 this year, in some way was decided much earlier than it stopped its existence – in the early nineties. Then the concern General Motors was headed by the great and terrible Jack Smith. Smith set the extremely clear task for himself – to deduce GM from financial peak by all possible ways. And he succeeded in it – mainly by increasing presence of GM in the Asian markets, reduction of the staff and maximum technical unification between brands of concern.

And if journalists and buyers didn’t care about technical unification plus or minus it, but visual “identicality” of GM cars started to be boring. Fortunately, there was no shortage of designers in the concern, and therefore in the beginning of the 1990s it was decided to give the cars of each company its own style which would be recognizable even within the limits of General Motors. Oldsmobile got “soft, airy” features, which could be traced in all models since the mid-nineties, namely – with Oldsmobile Aurora (on photo).

In 2000, Jack Smith left the post of concern head, and his place was taken by Rick Wagoner, who continued the policy of Smith, but carried it out more brutally: he cut off everything “superfluous” without a slightest sentiment, without regard to the historical significance. It was from his shoulder that the axe that cut off the head of the Oldsmobile was chopped off. Some journalists were sure that this was the most rash move of Wagoner’s career – because Oldsmobile was just beginning to gain momentum and increase sales.

And what could have been the company’s prospects if it had presented a serial automobile based on ideas of Profile concept … we will never know. Although the concept car was created as an exploratory one, without the prospect of rebirth in serial form, its creators clearly hinted: the brand Oldsmobile needs something like this – at the time the company did not have a stylish two-volume.

The Profile premiered at the Los Angeles Auto Show in January 2000. Externally, the car was a minivan, or crossover, or hatchback – in a word, it was “something” that could enjoy a good popularity in our day. Especially with the dopey-looking rear roof pillars. The design team described the car as follows: “We wanted to create a car with the appeal of a sport sedan and the practicality of an SUV.”

The sleek body with swinging doors rested on a four-wheel drive chassis that got its traction from a mechanically supercharged 3.5-liter V6. Power output was 250 horsepower at 5,500 rpm, and torque was 353 Nm at 4,400 rpm. The engine was paired with a classic four-speed automatic, and the selector of this automat was not a lever or paddles, but a rotating puck – exactly like in Jaguars and some cars from Chrysler today. The gearbox also had a manual mode, with buttons on the steering wheel to change speeds.

Technical features of the chassis Oldsmobile did not disclose, but noted that the concept is equipped with Precision Control – “smart” traction control system with sensors on each wheel, which distributes braking force to each wheel according to the data on the longitudinal / transverse overload and steering angle. Alas, no journalist could check the efficiency of the system. But to estimate comfort of the interior – quite.

Due to sliding rear doors, lack of a middle pillar, as well as a wide range of settings of a rear sofa Profile turned out to be very friendly to rear passengers. With certain settings, the legroom on the back row was more than one meter, which not every executive saloon of that time (and of this time, too) could boast. However, the driver was not constrained either.

Multimedia system with trackball control, Internet, Bluetooth to connect external devices, DVD, advanced keyless entry system Smart-Key (adjusts mirrors, seats, steering column to one of three driver’s profiles) – all this was at the disposal of the captain of this asphalt ship. Well, and a digital dashboard, where to be without it. If Profile had appeared a little bit later as a serial automobile – the demand would have been definitely. Probably, it would even have frayed the nerves of the futuristic Infiniti FX.

But alas. By the way, it was not the only iconic Oldsmobile concept car of that sunset era. But about other models – another time.