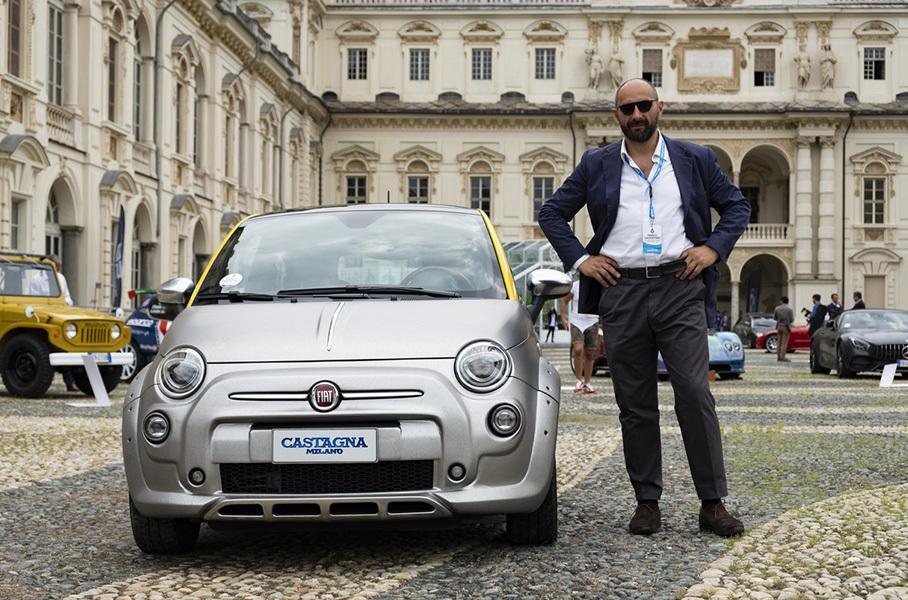 Who took such a liberty with the style of the famous brand?

Behind the idea of Castagna revival is a native of Naples, Gioacchino Acampora, who in his youth worked in the body shop Zagato. In 1994 he purchased the rights to the Castagna brand and opened a “new old studio” where he declared himself director and lead designer – positions which Signor Acampora holds to this day. There has been very little news about Castagna’s successes recently, but back in 1994 Acampora and his brainchild were often featured in car newspapers and magazines.

At the stage of formation Gioacchino Acampora made some correct, very necessary steps for the company. First of all he agreed on cooperation with Fiat concern, which provided Acampora with cars for the first projects. The debut creation of the new Castagna was the Alfa Romeo Vittoria (pictured), presented in 1995.

The second important step taken by Gioacchino was to improve his own design skills at the Polytechnic of Milan: in 1996, Acampora graduated in architecture, and his graduation project was a conceptual grand tourer based on the new Maserati Quattroporte Evoluzione sedan with a 3.2-liter twin-turbo V8. By the standards of concept cars, the project was frankly raw, but the teachers were impressed by the student’s work.

As Acampora himself admitted, he wanted to contribute to the history of Maserati for a long time, considering the brand a model of Italian style. To make the project less controversial than the Vittoria, it was supervised by Maserati and Fiat executives Eugenio Alzati and Nevio Di Giusto. The first version of the concept was shown to curators and researchers of the Institute back in 1995, but the public debut of the car took place only in summer 2002. Based on the already different Quattroporte, the unusual Auge appeared in all its elaborate glory at the Villa d’Este Concours d’Elegance. The Alfa Romeo 1750 Cabriolet Royal with Castagna Milano body was located next to the concept at the stand.

The concept car was named Auge, which can be translated as “eye of the storm”. As Acampora himself says, by creating the Auge he tried to “mold an answer” to the questions “What should a niche car look like?” and “How exactly should it be created?”. Inspired by sports cars from the late 1950s, including the Maserati 5000 GT Grand Tourer, the designer created a whimsical body with two levels clearly delineated.

Many of the lines, Acampora admits, were created or reinterpreted with the help of a computer, as the design was worked out according to the “form meets function” rule. For example, the protrusion on the rear bumper is designed to allow a leather suitcase to be placed on it. In general, “dolce vita” as it is. Now in the front part of the concept we can consider some resemblance with Nissan Silvia S15. But considering that the Auge was born back in 1995, it would be wrong to accuse the designer of plagiarism.

The body, under which the chassis of the Quattroporte is hidden, is made of aluminum and carbon fiber, but the lion’s share still falls on the “winged metal” – the Auge has only the bumpers and the hood made of carbon fiber. The bottom is made flat to optimize airflow and the front bumper and air intakes on the hood form an effective system of thermal regulation of the engine compartment. The additional cooling of the engine was vital, as the experts at Italtecnica increased its output to 450 horsepower.

An important role in the exterior composition, according to the creator of the Auge, is played by 20-inch wheels Momo, which emphasize the waistline of the car. Immediately behind them are massive brake discs and calipers from Brembo. Acampora thought the Auge was the epitome of classic forms in a 21st century reading and… well, he’s an artist – he sees it that way. Who are we to challenge this vision.

The rule “form meets function” is embodied even in the doors – they are deliberately long, to facilitate boarding on the second row of seats, and have no external handles, so that the thieves were not tempted to take the imposing car. Opening the doors is done with buttons on the key fob, and the central lock is connected to a satellite alarm system, which tracks the car almost the entire globe.

And if the exterior by the standards of Maserati can be considered extremely brave, in the interior the aesthetics of the Italian brand reeks from everywhere. Connolly leather, panels from walnut wood, woolen mats – here you will find everything that is necessary for the classical grand tourer. There are also buttons and levers made of ivory, lapis lazuli and coral by Italian jewelers.

The concept was publicly presented in 2002, when the absence of the latest electronics on board was already considered bad form. In this part, the Auge can give a head start to many executive sedans of that era – it has the coolest multimedia system (from Alpine and Philips devices) with DVD and TV, satellite navigation, telephone, Internet, portable computers with games, rear-view camera… There is a fridge in the console between two rear seats, and if travelers get caught in bad weather – no problem, the door cards have a pair of compact umbrellas.

The trunk of the Auge can hold four large bags (not counting the bumper suitcase), so the car with such a strange shape is quite suitable for long journeys. Moreover, the concept has spent some days at the track in Monza for engineers to calibrate settings of suspension and five-gear automatic – one should suppose that Auge is not the worst in the car. But did it have prospects to be reborn at least in the form of a piece, “niche” product for aesthetes?

Although the car was later exhibited at the Geneva Motor Show of 2003, side by side with the student project of Acampore, the reaction of the public was ambiguous again, that’s why the Auge remained the only prototype, though it was totally usable. Subsequently, the Castagna studio created a few more concepts based on Fiat cars (mainly based on the Fiat 500), but now is more engaged in refining the interiors at the level of a very high-quality tuning studio. Given the growing popularity of exclusive bodies, it is possible that Castagna’s best days are yet to come.