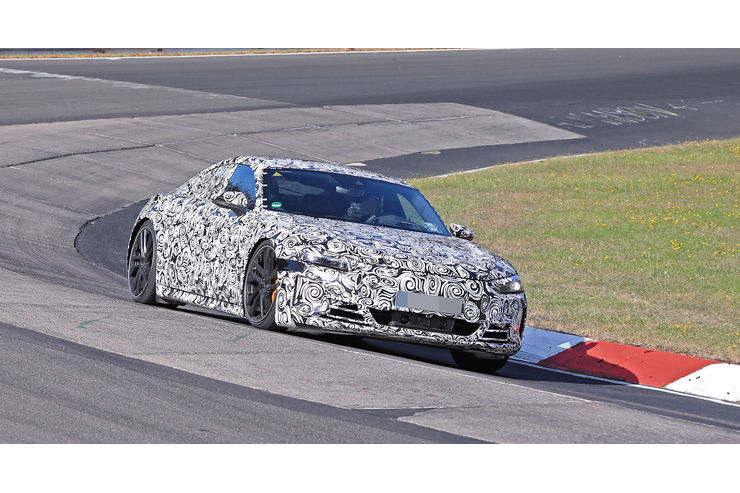 In terms of performance, the relationship to the Taycan is clear to see: 590 hp should zoom the E-Tron GT to 100 km/h in 3.5 seconds, and one battery charge should take it more than 400 kilometers.

The production model is clearly visible in the patent office images as well as the latest Erlkönig photos. The overhangs are short, the roofline runs naturally coupe-like and powerfully flared fenders can be seen at the rear. The rear with the y-shaped lights is adorned by a large retractable spoiler. The rear window is flat, but is quite small under the camouflage. At the front, the somewhat wider headlights can be seen compared to the study. The front hood is contoured, and the mirrors are positioned on the door sill as on the concept car.

Lower than an A7 – thanks to flat-floor architecture

The first design sketches for the patent office application show the final design of the production model.

For years, VW’s two subsidiaries Audi and Porsche, of all companies, which are certainly represented in similar segments and performance classes, have been unable to agree on a common platform for larger sporty vehicles such as the Porsche Panamera and Audi RS7.

The underbody is important because Porsche has not only integrated the battery into the floor assembly similar to most electric cars, but has also given the chocolate bar-like shape recesses for the passengers’ feet – the foot garages. These allow the seats to be positioned lower without making it uncomfortable for the occupants, and that in turn allows for a flatter body – just as you’d expect from sporty cars. This even made the E-Tron GT Concept, which is already said to be very close to series production, flatter than the new A7. The latter measures 1.42 meters, while the E-Tron GT is only 1.38 meters high and, at 1.96 meters, beats the A7 by 5 centimeters in width – with a virtually identical length of 4.96 meters.

Astonishing: The front overhang of the E-Tron GT is certainly no smaller than that of the A7. Exterior designer Andreas Mindt comments: Even electric cars need crash structures in the front end, and the many sensors for ever more autonomous driving capabilities cost additional installation space. 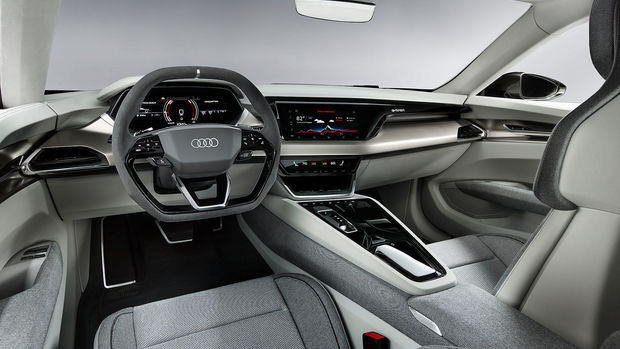 So let’s look back at the study: Thanks to a wheelbase of 2.9 meters, there is no shortage of space for passengers: The knee room in the rear is also sufficient for taller adults, only the sloping roofline could bring rear-seaters taller than 1.85 meters close to the headliner. On the other hand, the electric drive leaves room for 100 liters of luggage space in the front, and the trunk in the rear can hold 450 liters. However, it is not as usable as in the A7 because the large hatch is missing in favor of optimum body stiffness.

For the interior, the Audi designers have dispensed with the use of products of animal origin: The Audi E-Tron GT Concept has a vegan interior. Synthetic leather is used for the seats and other trim surfaces, and textile coverings made from recycled fibers are used on the seat surfaces, armrests and center console. The headliner and window pillar trim are made of microfiber material. Even the deep pile floor carpet is made from sustainable econyl yarn, a recycled fiber made from used fishing nets.

The touchscreens in and on the center console and the digital instruments in front of the steering wheel with angular baffle are probably not recycled, even though they are now familiar from other Audi cockpits. They can be assigned different layouts: for virtual round instruments, clear navigation maps with information on the range or for the various infotainment function menus. They can be controlled via the touchscreen with haptic feedback.

The flat layout with the low-slung battery helps with lateral dynamics thanks to a correspondingly lower center of gravity – Audi speaks of the level of the R8. Further cornering talent is likely to be contributed by the electric all-wheel drive with two electric motors, which can be controlled wheel-selectively – torque vectoring is much easier to implement than in cars with combustion engines.

In addition, Audi treats the E-Tron GT to all-wheel steering, which should make it manageable despite its long wheelbase. 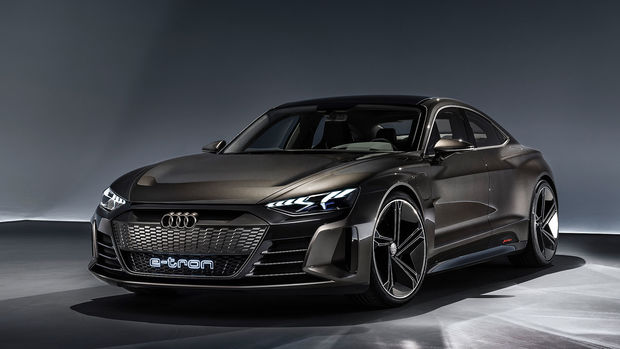 Another advantage of so-called flat-floor models: The low height means less frontal area, which is good for less drag, as is the lower ground clearance. The cW value is helped above all by the flat tail: The Audi E-Tron electric SUV has a cW value of 0.28 (0.27 with camera mirrors), the E-Tron Sportback with its hatchback should reach 0.25 – the Ingolstadt manufacturers did not yet want to reveal where the E-Tron GT will come out. The E-Tron GT doesn’t have camera mirrors for now: It’s debuting in Los Angeles, and the electronic exterior mirror replacement doesn’t have approval in the U.S. yet.

Less air resistance also means less fuel consumption in the electric car and therefore also more range. Audi chief designer Marc Lichte is therefore certain that the flatter cars will tend to become more sought-after again in the future. The new Premium Platform Electric (PPE), which Audi and Porsche are jointly developing and from which a total of three model families are to emerge, is therefore to be so variable that both high-floor and flat-floor vehicles, i.e. SUVs and sedans, can be created within one model family.

The battery has a capacity of 96 kWh, of which around 87 kWh should be usable in real terms, which should be enough for a WLTP range of around 430 kilometers; that would correspond to a consumption of a good 20 kWh. Of course, not if you frequently use the top speed, which is not limited until 240 km/h, or the enormous tracking capability (0 to 100 km/h in 3.5, 0 to 200 km/h in 12 seconds). Such values are provided by two permanently excited synchronous motors with a combined 590 hp, one on the front axle, one on the rear axle, resulting in electronically controlled all-wheel drive.

Fast charging thanks to 800 volts

The new E-Audi should get more travel time in than with sheer driving speed, because like the Taycan, the E-Tron GT has an 800-volt system. This means that about 20 minutes are enough to recharge the battery to 80 percent of its capacity, or a range of more than 320 kilometers (WLTP). Of course, the E-Tron can also charge at lower voltage levels. And even without cables – contactless via induction. For this, the E-Tron parking space needs a charging plate with an integrated coil and power connection. The alternating magnetic field induces an alternating voltage across the air gap in the secondary coil in the base of the car. With a charging power of 11 kW, the E-tron GT can also be conveniently fully charged overnight in this way, according to Audi.

As with the E-Tron Quattro, 30 percent of the range is to come from recuperation. And this via the two electric motors and the electrohydraulically integrated brake control system. Recuperation modes can be combined for this purpose: manual thrust recuperation via shift paddles, automatic thrust recuperation via the predictive efficiency assistant, and brake recuperation with a smooth transition between electric and hydraulic deceleration. The E-Tron recuperates up to 0.3 g exclusively via the electric motors without using the conventional brakes – this is sufficient for more than 90 percent of all decelerations, according to Audi. This means that virtually all normal braking maneuvers are fed back into the battery in terms of energy. Only at decelerations greater than 0.3 g do the ceramic brake discs come into play.

The E-Tron GT should be ready for production at the end of 2020, and Audi plans to supply the first customers in early 2021. In terms of price, it will be priced below the Taycan, but around 100,000 euros can be expected.

The first models based on the premium platform electrification (PPE) will then be launched at the end of 2021. Audi and Porsche are also developing this jointly. The E-Tron GT and Taycan are based on the same technology, but neither is yet on the PPE, which will be the basis for several Audi model families with pure e-drive from the B to the D segment. It’s good if there are some with flat-bottom technology – as long as electric cars don’t yet run on electricity from renewable sources, they should be as aerodynamically favorable as possible and more economical than a 2.5-ton SUV – and flat cars are also better for driving dynamics.