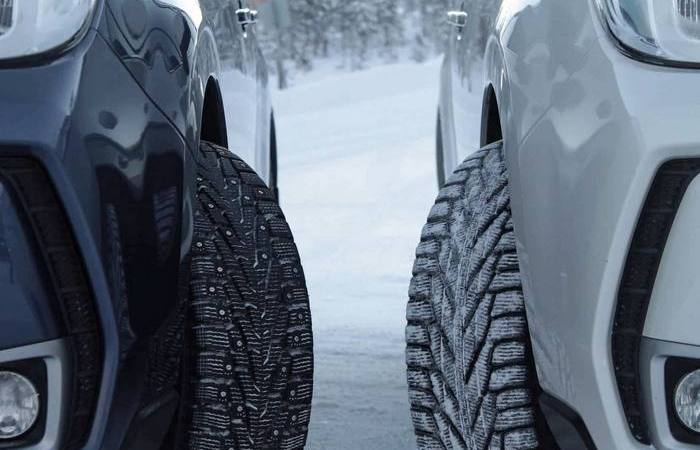 There are several eternal disputes among motorists, around which from year to year numerous spears are broken on the Internet. One of these can safely be considered a debate about what winter rubber for our latitudes is better – the brutal “studs” or friction tires. It’s a good time to take a closer look at both rubbers to try to highlight the weaknesses and strengths of each.

Friction winter tires or simply “Velcro” among motorists are ordinary winter nonstick tires. The name comes from the English word “friction”. In addition to the obvious absence of spikes, friction tires tend to use softer rubber, deeper tread and more sipes to ensure a stable “spot” of contact. Sometimes the smallest solid particles are added to the composition of the friction rubber.

Advantages: the rubber shows good results both on dry and wet asphalt. Fractional tires are considered quiet. The lamellae do not spoil the road surface. Such tires are allowed in all European countries.
Disadvantages: poor performance when driving on icy roads.

Studded tires are the exact opposite of friction rubber. In general, the name of such tires speaks for itself. The main feature is the presence of spikes, designed to increase traction with a problematic slippery surface. Other features include a smaller number of blades, a smaller depth of the tread. Also studded tires always use hard rubber.

Advantages: provide good traction on icy roads, better performance in snow, better handling and shorter braking distance.
Disadvantages: they lose most of their positive qualities in the wet, the wheels are noisier, they damage asphalt surfaces, slightly increase fuel consumption, and are banned in some countries.

So what tires are better to buy?

Based on the pros and cons of different tires, it is easy to guess that you should choose tires depending on the tasks facing the vehicle. On the “bare” asphalt friction tires generally perform better. Therefore, they should stop those who spend most of the time driving in the city, on roads, on which almost no ice and snow. Accordingly, “studs” are strongly recommended for those who drive primarily in the countryside and in the countryside, on roads where icy areas are often encountered in the winter period.