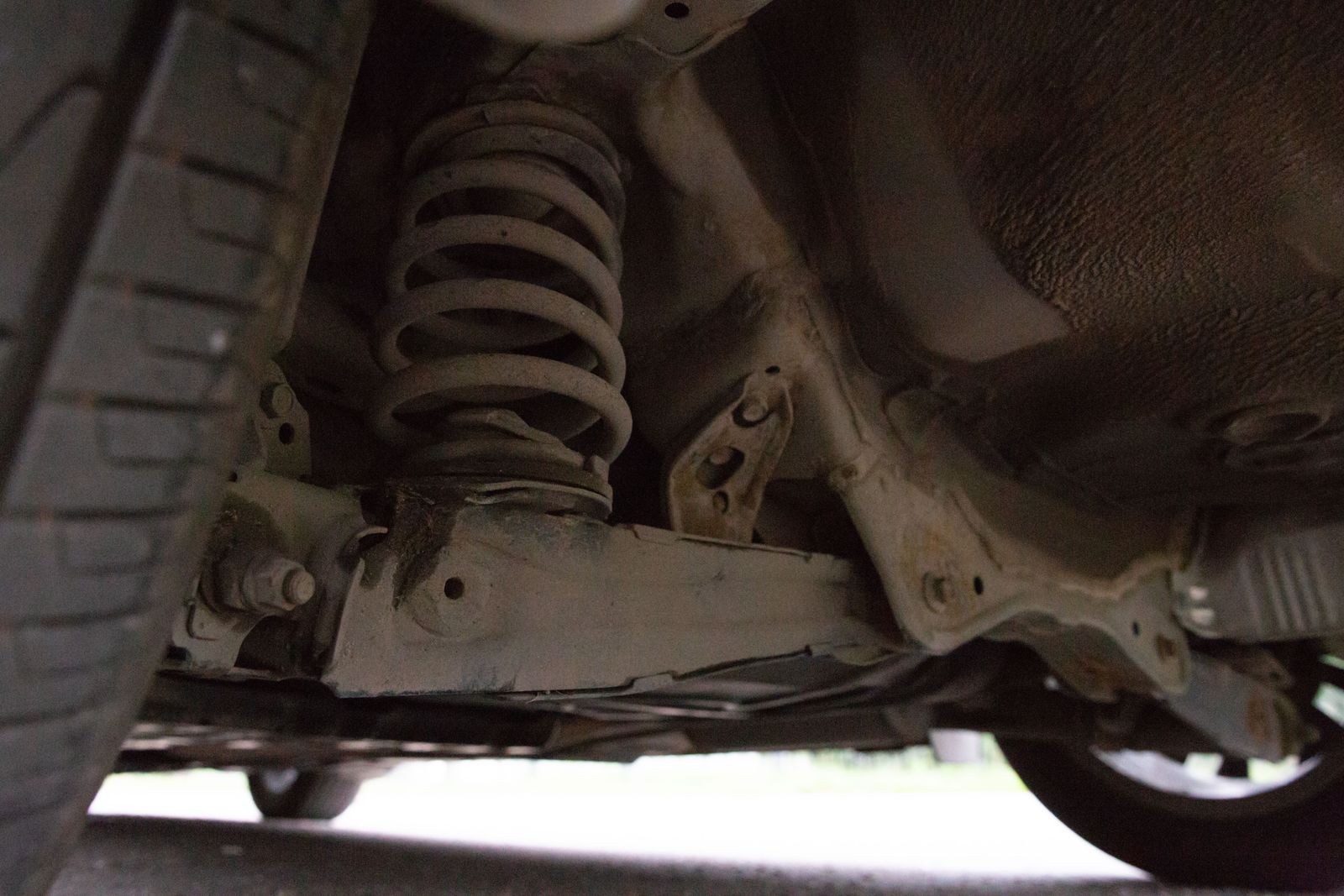 This Civic can be safely advised to those who do not like to change consumables frequently. The front pads on the ninth generation walk quietly on 80-100 thousand kilometers even in cars with ACS. Disks, respectively, can be native and on the mileage more than 200 thousand.

It is clear that before the appearance of natural wear, the disks can be spoiled, for example, by overheating. The main reason for the earlier replacement is dirt and jammed fingers, swollen dusters due to copper grease and other operating errors.

Rear calipers and pads do not walk as long, on average once and a half times more often than at the front, you have to change the pads, and the mechanism of the handle with long downtime can sour, especially in humid climates.

Brake tubes at the age of 6-8 are already rotten, although there are no fistulas or bloating yet. Brake hoses are also already cracking and may even leak. It is rare for ABS to fail.

The suspension is not only very strong, but also repairable. Thus, the silent blocks and the ball bearing in the front are changed separately from the levers, and in the rear suspension all is not too expensive and, moreover, is made with a good margin of safety.

After 120-150 thousand runs, the shock absorber dusters are wiped and it is better to change them immediately, otherwise the shock absorber will start to “sweat”. By the hundred thousand runs, the front struts’ supports, or rather their bearings, usually run out. They are large, plastic and very vulnerable to dirt. The original costs from 100 euros, and the non-original ones, as practice shows, are very questionable in terms of quality and walkability.

Knocking of the rail is a generic problem that is characteristic not only for several generations of Civic, but even for Accord. First of all, it breaks the side bushings of the lath due to not very successful anthers and high load on a rather thin shaft. The shaft itself with EUR is seriously worn out already for runs in 150-200 thousand city cycles, which may also cause backlashes and knocks.

A typical solution to this problem is to replace the side bushings without removing the rail, which usually helps with small runs. Fluoroplastic bushings and new grease can extend the life of the unit by another 50 thousand, if not more.

If the dust caps have been torn, the shaft has been corroded, the toothed pair has been worn out, the bearing seat has been worn out or simply everything is very worn out (which happens for 200 runs), the rail will have to be overhauled. Often, instead of the bulkhead of the native rail is put repair with Sivic 8th generation, well it is fully compatible with the new.

In addition to the slats, the source of knocking can also be the steering tips and steering rods – the resource of the latter varies on average from 60 to 100 thousand kilometers.

The drive of cars is always front. The total service life of SHRUS covers is about 150 thousand, and it is better not to tighten with their replacement, they do not tear, but sweat through microcracks. And pay attention to the corrosion of the drive shaft: under the damper, it is prone to corrosion, and sometimes it breaks down. And the shafts of the ninth generation are lighter than the eighth generation, where this problem was also.

You can find a machine with mechanics, but it is difficult. The reliability of the 6-stage MCPs does not cause any complaints, although occasionally there are machines with overheated clutches and killed synchronizers. But this is found only in “racers”, and, as a rule, complete with a half-dead box is a Chinese dodger, stickers and freestanding disks with rubber-resolent.

Clutch resource at normal operating style is quite high, and the cost of replacement – gentle, good design is quite classic, with an external pressure bearing. But breakdowns of the flywheel gear, conditionally “eternal” details, with runs up to 150 thousand – this is an obvious constructive miscalculation. If there are any extraneous sounds at the start of the engine, examine the crown on the elevator. There are only a few cases of breakdowns, but the “fault” for that is the ridiculous number of machines with MCP of this generation on sale.

Automatic box here, in fact, one, although in several versions. This is the last generation of Honda’s shaft five-levels. Its advantages include phenomenal reliability, versatility to the driving style and good gear ratio.

The minuses are also well known. The speakers do not wait, the box is very, very thoughtful and in every way opposes active driving. But the fuel consumption is almost lower than with MCP. Detailed information about these boxes is written in a separate large article, and here I will mention only the main points.

The box is assembled mainly on rolling bearings, has a very low operating pressure, a reliable oil pump and a kinematic scheme with independent transmissions. As a result, breakdowns are extremely rare – you can only break something mechanically by unsuccessful rocking of the machine or frankly spitting attitude. After all, even without oil change, the box sometimes goes 200 thousand without problems. And the practice of using ACS of related series SPCA/MPMA on the last generation of Civic allows you to hope for 350 and more thousand trouble-free mileage with minimal maintenance.

Breakdowns of solenoids happen, but the peculiarity of the box design allows you to change most of the elements without disassembling the ACS, so it’s really small trouble. It’s a pity that wearing of the GDT lock pads may require removal of the box and restoration of the “bagel” for about 200 thousand runs, but it happens mostly to those who still think that Civic is a “sports” car.

A variator is installed on hybrids that are very rare in our country. In general, the design is quite successful, approximately like on Jazz/Fit, but the peculiarities of the transmission cause early wear and tear on the belt and cones, especially the box does not like long trips at high speed on the track.

If the electrical part is in good working order and the belt is replaced with a reinforced structure in time, it works for a long time. But which of the owners will be in time (i.e. in advance, before any visible problems occur) to change a cheap belt? So, it turns out that when running 150-200 thousand kilometers, the chances of breakage of the unit are very high. For example, now in countries, where it makes sense to bring used cars from the USA, for example, to Ukraine, cars with transmission breakdowns are brought.

The main motor here is a well known R18A from Civic of the past generation. To be more precise, the R18A1 version went on sedans for the U.S., and R18A2 – on hatchbacks and wagons for Europe. During the restyling of 2014, the engines were lightened and updated to meet the new environmental standards. The updated indexes are R18Z1 and R18Z4.

The set of difficulties with the motors is absolutely identical and does not depend on the version and year of manufacture. In addition to the above mentioned difficulties with the motor suspension and various tubes, it is necessary to note the necessity of frequent valve adjustment at least once in 50 thousand runs (otherwise camshafts are killed, especially on low-viscosity oil), weak exhaust and catalyst, difficulties with oil leaks from the solenoids and very low idle speed, due to which the motor on the idle does not warm up and vibrates strongly.

The plastic bottom support of the engine and the thin tubes of the cooling system are one of the main irritants for owners. At the same time, the cost of original components is very high, and the resource of substitutes is usually quite small. As a result, the lower support is frankly “kolkhoz” from what you can, and the tubes are selected non-original.

Crankcase gas ventilation system after 100 thousand runs thoroughly clogged, and the motor begins to sweat on the glands and caps, and it has a very weak front crankshaft gland – if it is squeezed, it can lead to high costs.

The resource of the timing chain is large, more than 250 thousand, the oil pump is very reliable, and the liners work perfectly even with low-viscosity oil SAE20, it’s only a pity that the camshafts from it are gradually painted. With 200+ mileage and a rare oil change or unsuccessful choice of brand, engines may start consuming it. Usually the consumption does not go beyond a liter or two from change to change. The reason for this is almost always piston rings and a malfunction of the VKG. The price for a contract R18 starts from 60 thousand rubles, which is very little for a fresh unit.