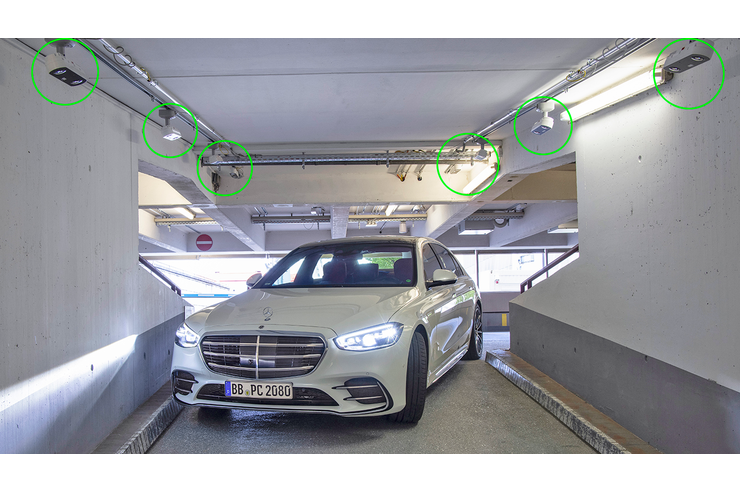 Bosch and Mercedes are testing fully automated parking with the new S-Class at Stuttgart Airport. The big advantage: less stress for the driver, more space for the parking garage operator. But how convenient is driverless parking really?

My boss sends me to Hamburg for a press conference. So far, so good: brush my teeth, pack my suitcase – and off to the airport. There’s not much traffic on the A8 yet, and it’s not until we reach the entrance to the parking garage that the traffic picks up. Some of the parking garages are already full, and the remaining free spaces are a good walk away from the departure terminal. I don’t really have much room with my station wagon in the mostly multi-story buildings. Without maneuvering, I can hardly make it around the tight curves. So I put the car in reverse gear once again and head back. The plane leaves in 40 minutes – that could be tight.

Reserve a space, request a vehicle and pay: In the AVP parking garage, everything works via app.

It’s a good thing that I’m not in a hurry in reality, let alone have to fly to Hamburg. I was also lying about the parking garages being full, because since the beginning of the pandemic, only about 20 percent of the capacity at Stuttgart Airport has been used. I am on the first floor of P6. A pilot parking garage, as several signs at the entrance make clear. According to Bosch, this is where “mobility history” is to be written today.

Together with Mercedes-Benz, the supplier is testing Automated Valet Parking, or AVP for short. An S-Class is to park in one of the oldest and also narrowest parking garages at the airport without a driver and fully automatically. At the end of the test operation, Bosch wants the AVP permit from the legislator.

Automated Valet Parking: Parking with harmony – and without a driver

Parking is indisputably a highly emotional experience. No one really likes doing it, especially not under observation, and especially not when impatient drivers in the rearview mirror are annoyingly honking their horns – pure stress.

That’s why two so-called “drop-off” zones have been set up in P6 around 15 meters behind the barrier. In future, AVP users will park their vehicles in these generously sized areas, load their luggage from the vehicle and start the actual parking process via an app. The car then looks for a free parking space. The driver is already on his way to the terminal. Incidentally, just as the car parks itself, it also returns to the marked area on app command – sounds pretty cool.

So much for the theory. I was given a live demonstration of the fact that the technology also works in real-life operation, using the new S-Class as an example. Mercedes’ flagship fulfills Level 4 autonomous driving requirements, which means it doesn’t need a driver behind the wheel and is the world’s first production vehicle with AVP technology on board. But it doesn’t need much of the latter: The S-Class mainly uses existing series-production technology. Expensive sensors are not needed. Only a special module is needed to communicate with the parking computer. Potential buyers will be able to order the convenience function in the future via the “Intelligent Park Pilot” optional equipment. According to the manufacturer, the costs are in the low four-digit range – for S-Class drivers, the price should be secondary anyway. 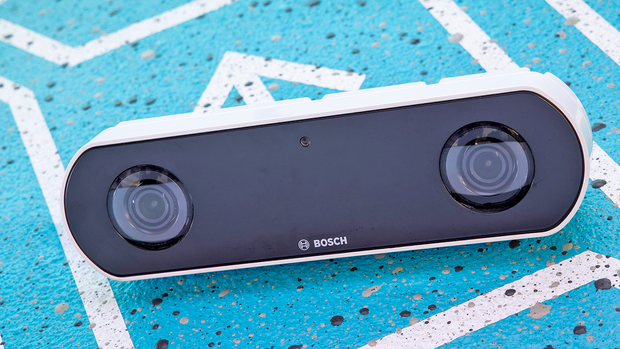 Instead of installing expensive laser sensors (LiDar) as in the past, Bosch is now relying on significantly less expensive cameras.

Compared to previous test projects, Bosch is not using lidar sensors in the P6, but inexpensive cameras. Around 180 of them were mounted on the ceiling. They determine the vehicle’s position ten times a second. A server two stories above determines the data. From there, the drive command for the car is calculated and transmitted to the car via Wlan. The system also detects possible objects on the floor by means of a specially speckled coating. If a luggage cart is in the way, the technology reports the incident and informs an employee.

The AVP system obviously has several advantages: The sensor technology does not have to go into the car, but only into the parking garage. This means that the technology can also be used more easily by other automakers. Bosch is already in intensive talks with other companies. I was not told exactly with whom. Since the camera infrastructure can be easily installed in a parking garage, the technology is also interesting for older buildings. Modular retrofitting, i.e. floor by floor, is also no problem.

This is another reason why it is a thoroughly interesting concept for parking garage operators like Apcoa. The company operates more than 9500 locations in 13 countries with a total of around 1.5 million parking spaces. Since parking with AVP is completely driverless, vehicles can be parked closer together. This provides more space. Apcoa expects a space gain of 20 percent. At the same time, Europe’s largest operator is trying to make the payment process as contactless as possible. In other words, no vending machine, no ticket, no button-pushing at the barrier. Certainly not a bad idea in times of Corona.

A cheek! I can park myself.

It’s impressive how precisely the more than five-meter-long S-Class elegantly negotiates the tight curves in the parking garage. But do we really need such bells and whistles? I’m skeptical, pack up my things, make my way back to my station wagon and throw my work bag into the trunk. An SUV parks right next to me. I pull in my stomach to somehow get behind the wheel. The whistling of the sensors as I park gives me the rest, and where was the exit ticket again? Right, in the bag in the trunk. Maybe the AVP isn’t such a bad idea after all – provided it doesn’t get too expensive. It is not yet known how much the service will ultimately cost. But one thing must be clear: a premium service should also have a premium price.