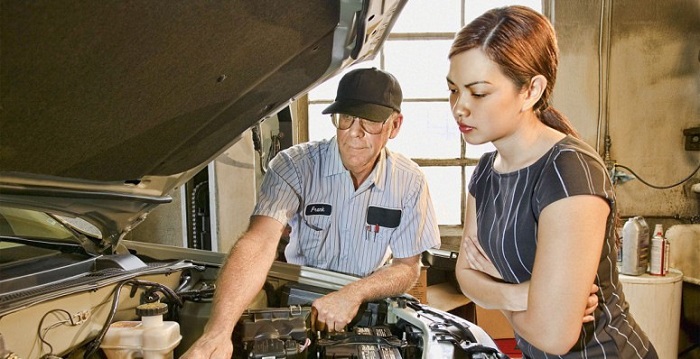 Today very few people are engaged in self-service of the car, not to mention the repair. And what for, if you can always come to car-care center and do all what is necessary. But nobody will guarantee that the calculated sum will be fair. There are a weight of examples, when unscrupulous workers wrap naive car owners around their fingers. How they cheat most often and what to do in this case?

If they tell you that the oil or other fluid began to leak – you are likely to believe the master. And, meanwhile, to check the information is quite simple. It is necessary to pour antifreeze or other fluid into the engine compartment and take the car to a clean place for a few hours. If there is a breakdown, you will see traces on the ground or snow. Then do not delay your visit to the service station. Well, and if the problem is not confirmed, it is better to change the car service.

Or you have come to the station, because you heard a knock in the suspension. After inspection, the mechanic sees that the silent block is broken. But he informs you about the lever failure and pulls it to make it convincing, showing the play. And instead of replacing one joint, he makes you to agree to replacement of the whole device.

Sometimes it’s the other way around: the lever is faulty, but the silentblock is fine. But you still have to replace it, because a car mechanic can cut it without your noticing it. And thereby force you to pay for a new bushing.

What to do in such cases? If you are communicating with a mechanic you do not know, do not rush to agree to the repair. Ask someone you know who knows about cars. And if you don’t have one, visit a couple of other service stations without informing about the previous inspection. And already on the basis of the information received make a decision.

Replacement of the allegedly defective parts

If you don’t know anything about the device of your car, you may be told about a defect or breakage of an important detail. This happens especially often at service stations, which have their own store of spare parts. A master will make a diagnosis and poke his finger at a part that may really serve you for another couple of years.

After replacement you’ll get a receipt, but not the part. They will tell you that it has been recycled, thrown away or lost. And in fact the “original” part is still there, and the new, allegedly installed part is hidden for the next scam.

There is another variant of the scam: they showed you that they changed the part and the old one was demonstratively thrown out in front of your eyes. However, when you leave, they will take it out and carefully clean it. And then they will sell it as second-hand, but it is still good and serviceable.

What to do? According to the law, you are obliged to give back the old part, leftover materials or parts. So always insist on your rights as a consumer.

Most drivers are unlikely to be able to tell the difference between a branded part and a penny counterpart. If a replica is installed in a non-critical place – that’s not a problem yet. It is quite another matter, when it is necessary to change a spare part of important unit, like braking system or hoses. Here we are talking about safety, so you need to replace parts only with original or high quality analogues. A mechanic, installing a replica instead of a branded part, will pocket the difference. And you, not knowing about the counterfeit, will take the risk.

What to do? Request a document at a car service center, confirming the originality of the part. If possible, compare the data from the packaging with the markings on the body. Check the bill of lading for the brand or manufacturer, the technical data. If you bought and brought the part yourself, insist on your presence while the master is working. This will make the possibility of substitution more difficult. Although you may not keep track of it.

It happens that you came to the car service with one problem, and during the work new “breakdowns” appeared. For example, you need to change the brake pads, and a couple of days later you are informed that the cylinders or disks also need to be replaced. And it is urgent.

What to do? Indeed, hidden defects may be detected in the course of repair, which were not revealed during the initial diagnostics. But you should be alert when new breakdowns are reported too often.

Replacing the lubricant is one of the most common ways to cheat. There are several ways to cheat. For example, instead of a full change with engine and system flushing, you might just get a little fresh grease refilled. But they will take money as for the whole service.

Or they’ll swap out the oil for cheaper one. You’re sure that you paid for a better and more expensive brand, but in reality you got a budget one. Okay, if it’s just cheap. It’s worse, when you are “happy” with a low-quality one. Then, after a while, the additives and harmful impurities it contains will cause problems with your engine and cooling system. You will need to replace the power unit, which is also expensive.

What to do? Try to check the work of the mechanic. If this is not possible, check the filled oil with a dipstick at the end of the procedure. If it’s dark, they’re trying to trick you. Fresh oil should be clear and golden in color.

The simplest thing you can encounter at the service station is the overestimated cost of the service or parts. For example, you made a diagnosis, calculated a certain amount. You have paid, and some time later you found out that the same parts cost much cheaper at a nearby service center.

Another variant: you come to the service station to change some detail. And you are told that it makes no sense to replace just one. Say, you need to change only a pair. Whether it is true or not, it will be difficult to understand. But you will most likely give more money than you bargained for.

What to do? Begin to understand at least a little bit in car construction. And before you go to a service station, find out the average cost of parts.

In order to make you pay up, the masters can slip metal shavings into the oil pan and demonstrate the scale of the problem. They say that metal in oil is a sure sign that automatic transmission needs to be replaced. You will definitely agree with this argument.

What to do? Have the automatic transmission checked at another auto service center. Or keep a close eye on the mechanic during the oil change.

During the examination of a vehicle, a workshop mechanic may unnoticeably cut a hose, limit the air reflow into the engine or make some other disgrace. The consequences will not be detected immediately, so it is quite difficult to prove the guilt of the worker. And after the breakage is demonstrated, the further scenario will depend on your awareness and insolence of the mechanics. If they understand that you don’t know much, they might “trick” you into replacing the engine or reassembling the chassis.