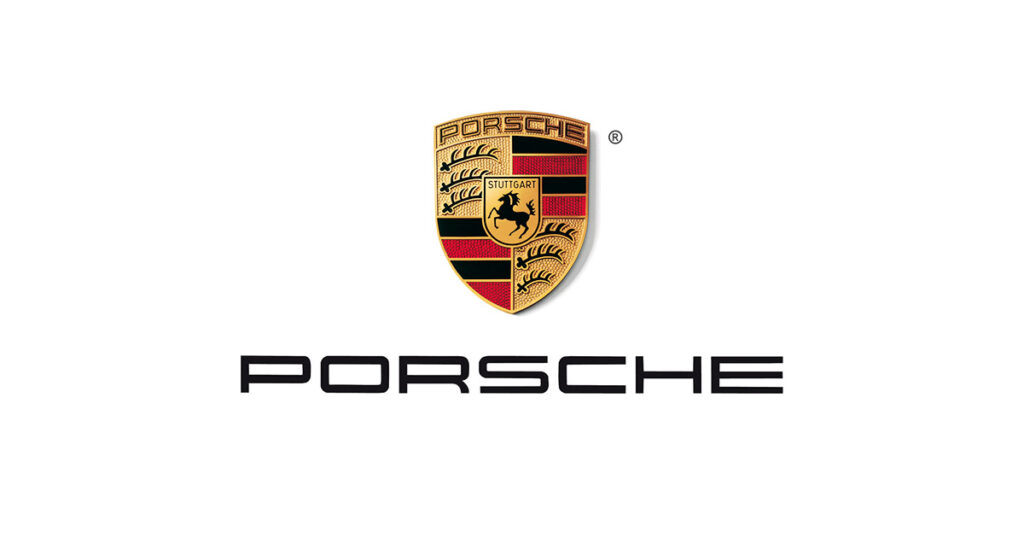 By the early seventies, Porsche had long been building race cars, where light weight and manic attention to detail took precedence over horsepower. But with the advent of the Porsche 917, the Germans moved into the big leagues and began not just to bash the bigger competitors, but to win Le Mans and Can-Am.

But the Germans still didn’t have a production model capable of challenging the Italian supercars, and fierce controversy began to rage on the sidelines of the company. 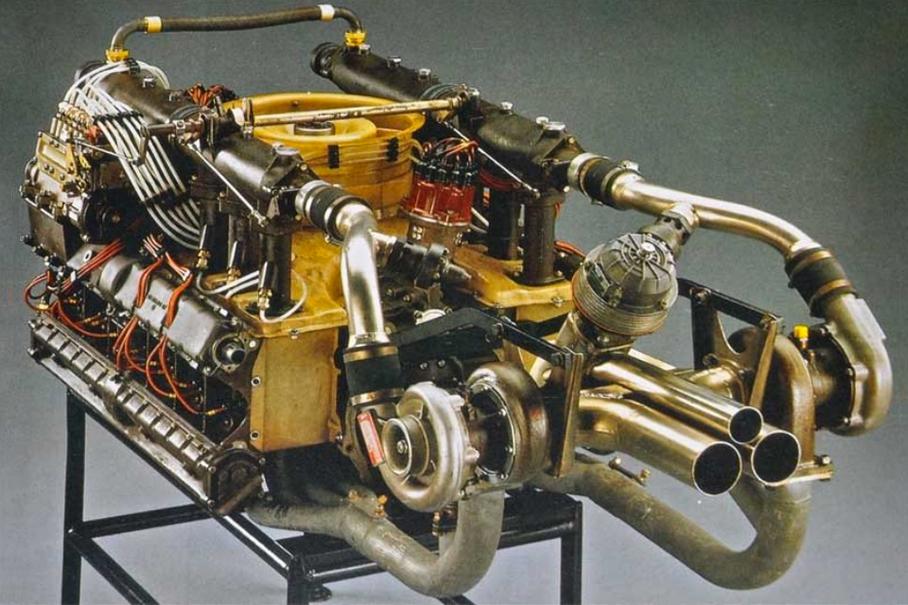 In qualifying mode, the 12-cylinder Porsche 917 engine for the Can-Am produced 1,500 horsepower – twin turbochargers (snails in the foreground) created 2.7 bar of pressure.

Some people thought the 917 should be the basis for an extreme lightweight machine with no compromises, while others talked about a flagship of the brand, with a powerful motor and rich equipment.

The sales department was not sure that they could sell something like that: in the seventies the automotive industry was going through a fever of fuel crises – lines were often lined up in front of gas stations. It came to the fact that Germany introduced a hundred kilometers per hour speed limit, which was applied not only on the autobahns, but also on the Nürburgring and even on the test track of Porsche.

Nevertheless, the future flagship had a powerful protector – former Porsche motorist Ernst Fuhrmann, who had once created an opposition engine for the 356 model. In 1972, Fuhrmann took over the company and was obsessed with the idea of transferring the turbo technology of Can-Am race cars to public roads. A path the brand had taken more than once.

But the engineers didn’t have much choice. A heavy and powerful V8 or V12 would have made the rear-engine Porsche 911 undriveable. It was necessary to either move the big engine inside the wheelbase, or look for ways to increase power without a global impact on the weight distribution. That is, to put a turbine. Chevrolet and BMW had already tried this little-explored technology on the Corvair Monza and 2002 Turbo, but to a very limited extent.

First, the snail was installed on the upgraded 2.7-liter engine of the standard Porsche 911, but the turbocharged three-liter variant performed even better. The original opposition engine from the sixties once had a volume of two liters, but now it has been stretched one and a half times. 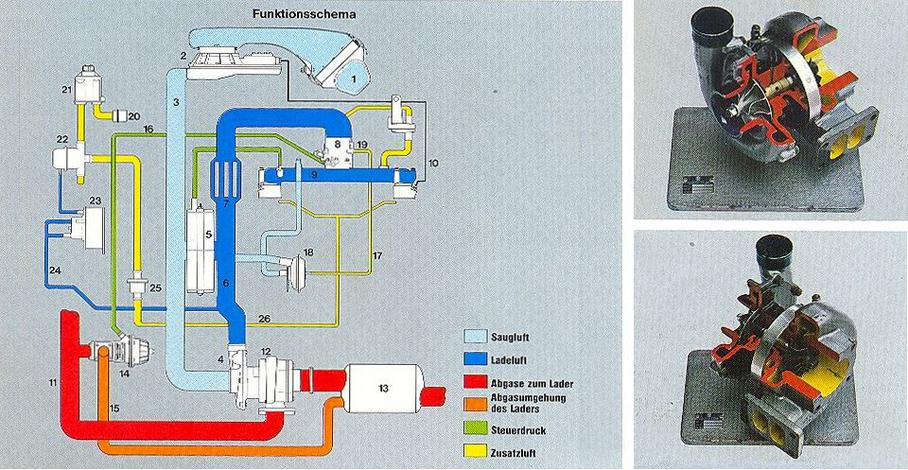 The KKK 3 LDZ turbine and the engine diagram. The number 12 is the single turbocharger, and number 7 is the intercooler added only a few years later.

The single KKK 3 LDZ turbine spun up to 90,000 rpm and could produce overpressure of 0.8 bar. And it was supplied by Kuhnle, Kopp & Kausch, which in the 90s became part of BorgWarner and still produces turbochargers with variable geometry – for the current generation of 911 Turbo.

The boost pressure increased the tendency to detonate, so the compression ratio was reduced from 8.5:1 to 6.5:1. This meant less efficiency at low loads, and here, too, the three-liter version looked preferable. At the same time, virtually all engine parts were redesigned. Only the aluminum crankcase, steel crankshaft, connecting rods and valve covers were untouched. 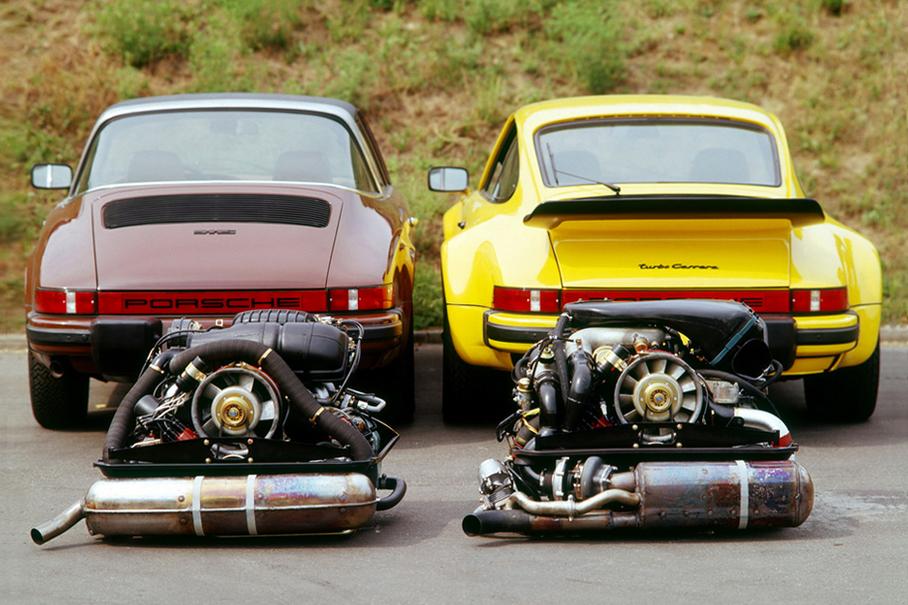 It is clearly visible that the engineers found a place for the only turbine (engine on the right) by squeezing the exhaust system. The performance of the cooling system has also been increased with more fan blades.

For example, channels in the cylinder head were made narrower to increase the speed of gas passage, and the surface of the block had a larger area to withstand the increased load and temperature.

At the same time, engine cooling for the 911 Turbo remained air-cooled until 2000.

The resulting engine produced 280 horsepower, but the transition to the turbo was avalanche-like and could scare an untrained driver, so it was decided to reduce the power to 260 horses. At weight of 1140 kilograms even these forces seemed quite enough.

Yes, the 2.7 liter engine of “Carrera” produced 210 horsepower then, but the difference between motors is best illustrated by torque values. The 911 Turbo’s peak 343 Nm was available at 4,000 rpm, and the atmospheric 255 Nm only from 5100. The “Turbo” version hit the first hundred in 5.5 seconds, three tenths faster than the 340-horsepower Ferrari 512 BB. Top speed was limited at 250 kilometers per hour. 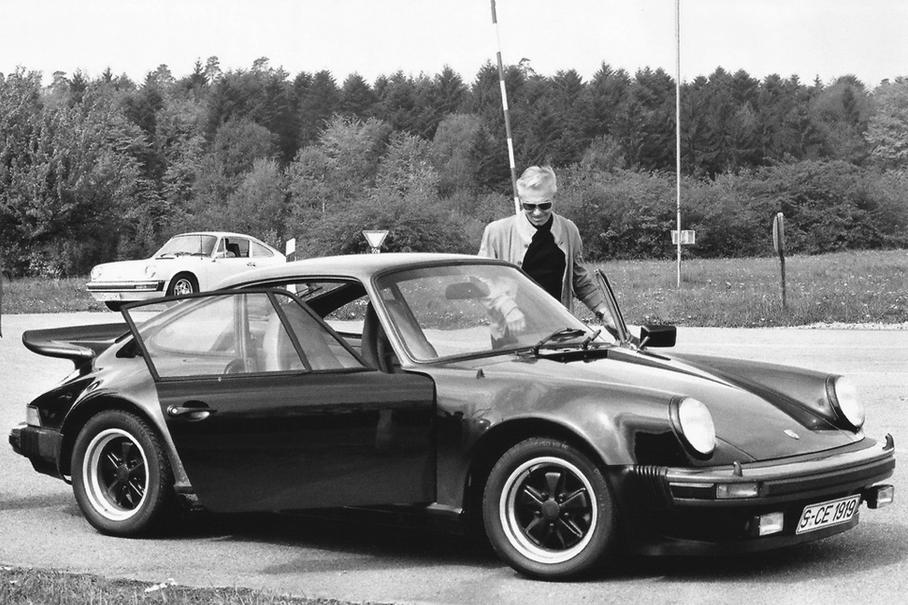 The Turbo’s suspensions have been reworked, and the front and rear anti-roll bars are thicker. Special gas shock absorbers were supplied by Bilstein.

The transmission had only four gears, but engineers at the time felt that with such torque this would be sufficient, and the larger gears of this transmission would better handle the load. Many engine parts were also reinforced, which only added to the load on the rear axle.

As one countermeasure, the rear tires had to be made noticeably wider than the front: 215/60 R15 versus 185/70 R15. Such a profile seemed like thin rubbers at the time, and the greater grip at the stern made the 911 Turbo more stable under throttle dump in a corner than a conventional 911.

The size of the tires entailed an increase in the wheel arches – so the Turbo’s width grew by twelve centimeters, and the sports car got seductive “hips” that were crowned by a fiberglass hood with a protruding air intake spoiler. 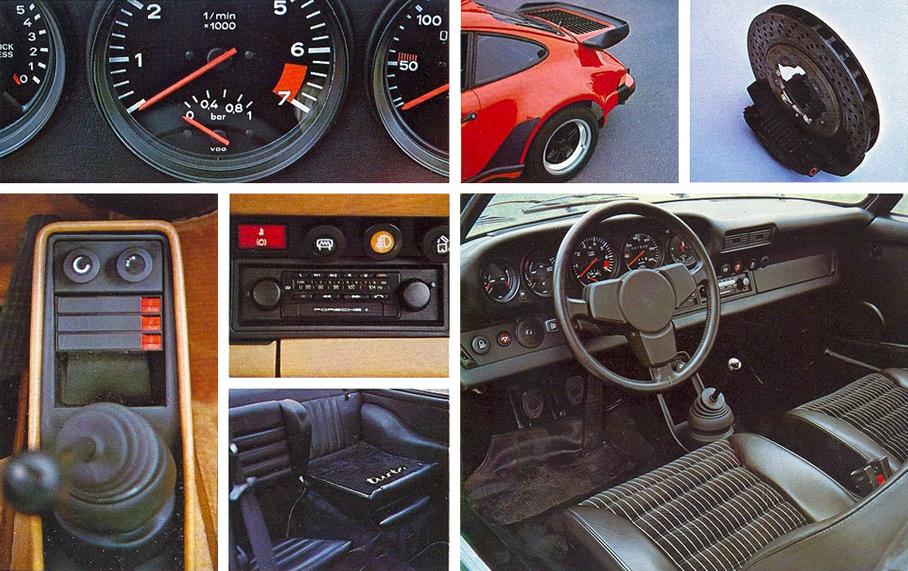 The 911 Turbo’s late-seventies equipment. Perforated brake discs only appeared a few years after its debut.

A 40 percent self-locking differential on the drive axle was available as an option.
The car was so different from the regular Nine-Eleven that it was given its own intra-factory index of 930, although from the outside the difference was not so obvious. Black polyurethane spoilers, protruding fenders and air intake, black wheel cores, body-colored mirrors and headlight surrounds. That’s it.

The same could not be said about the price: the 911 Turbo cost 65,800 deutschmarks against the price of 40,950 for the 911 Carrera Coupe. For the difference, you could buy another Porsche, the front-engine 924. The production plan was modestly estimated at two hundred cars, but by the spring of 1976 the factory had left with one thousand. Since then, demand continued to grow with each generation.

The word “turbo”, meanwhile, became associated with something very expensive, very fast and ultramodern, and they started putting it on everything from family sedans and slot machines, to movies and glasses. But the fashion has passed, and 911 Turbo has remained. At least until Porsche starts flying with ion engines.