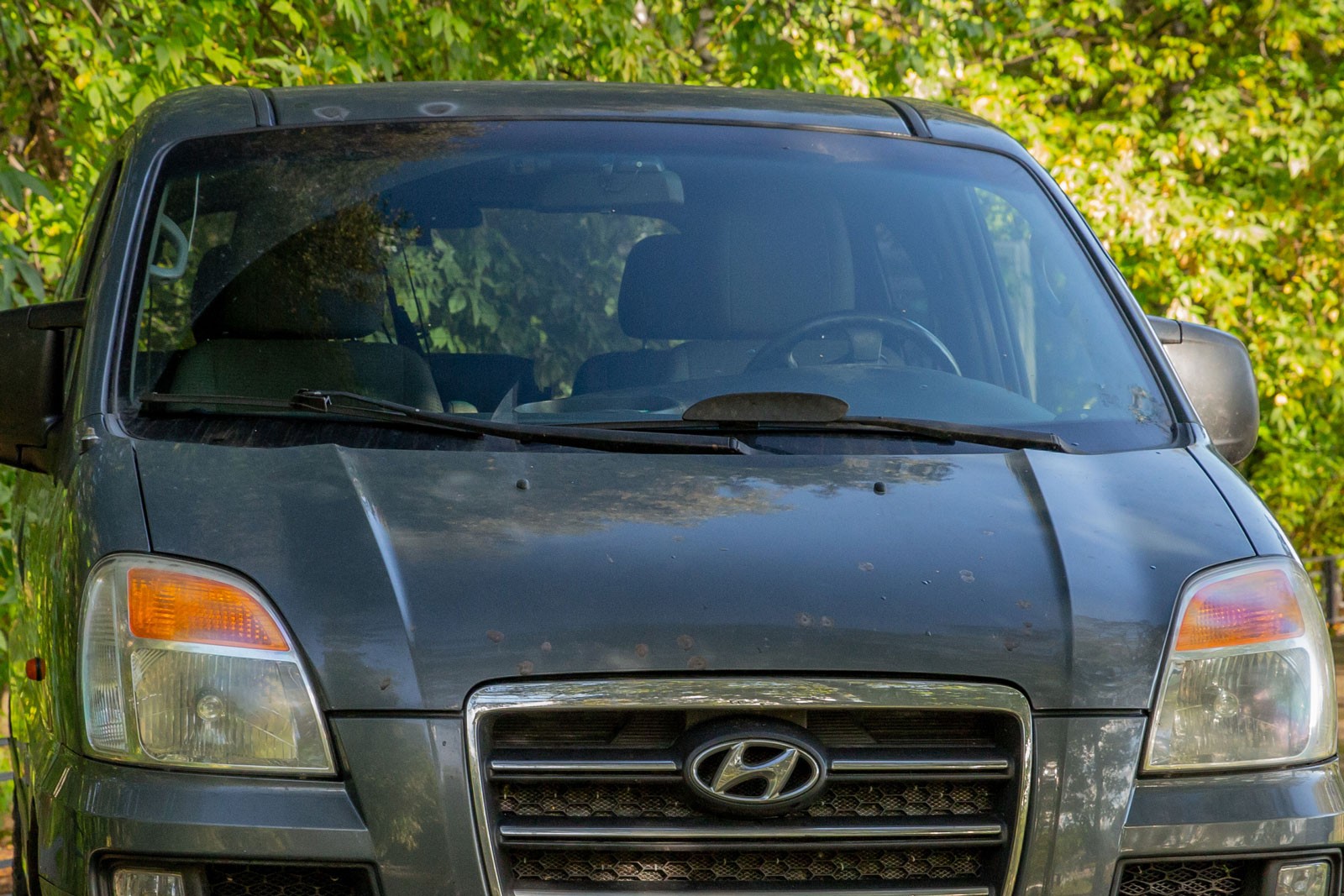 It is known that Hyundai actively used license agreements with Mitsubishi up to the beginning of the 21st century, borrowing engines, boxes and entire models. Here is the H-1 from those times when Koreans were not ashamed to borrow from the Japanese. The basis of H-1 is the fourth generation of Mitsubishi Delica. Let the Koreans say that they have developed the car independently, but any mechanic will tell you that they are strikingly similar, though units of them are not interchangeable “in head-to-head”.

The minibus has a bearing body, but it is based on a strong frame, welded to the bottom. The chassis is typical cargo, with uncut axle behind and independent front suspension on torsions, about the same as L200 and Pajero of those times.

All-wheel drive is the same as the engines. Early models had generally Mitsubishi 4D56 (diesel 2.5) and 4G64 (gasoline 2.4) under the hood. Later they were replaced by Hyundai engines – 2.5 D4BH/BF and D4CB, but all of them have Japanese roots. Even 3-liter gasoline versions are available from time to time – under the hood there is 6G72 engine, also from Mitsubishi.

The chassis was available in two versions of wheelbase, 2810 mm and 3080 mm, and among transmissions the automatic transmission unexpectedly appeared. Of course, were available as a cargo version, as well as passenger cars, including convertible interior. The top versions even had a 3-zone automatic climate control, and there were real zones with a separate heater and air conditioning in back, but not as cars had, when the temperature on the left and right sides was changed a little. In general, real Korean luxury.

October, 1996. Production of the first generation of the model begins. Engines are only 2.5 4D56 80 hp diesel. Manual transmissions.

Spring of 1997. Appearance of version with 112 hp 2.4 4G64 gasoline engine and automatic transmission. All-wheel drive versions are shown. By the end of the year, a number of markets would receive such variants.

Externally the cars often still look good, if not closer than 20 meters. But the vast majority of inexpensive examples will have serious body issues, from paint bubbles on the doors, roof seams and windshield frame (especially on the bottom) to missing arches and sills.

Somewhere from the price of 450 thousand rubles (as of early 2021) begin to come across not rusty externally cars that have no obvious traces of recent brushing, rust leaks and holes. These are usually examples after the 2004 restyling – they do not take care of the restyling, unless it is a four-wheel drive or a rare option in a special preparation.

Only isolated copies of garage storage or simply those which were in one hands and without space mileage can please with pristine “iron” and decent appearance. But even with outwardly decent condition and the price more than half a million, be ready to that on thresholds of a driver’s door and a side sliding door rust is not covered with anything, the lows of doors from within have rusty runs, well, on a hood edge and under sealings of a back door there are swells and rust spots.

Cars with plastic door and sill covers rust more than those without them. The plastic only slightly masks the beginning of the process, but the dirt accumulated behind it greatly accelerates the formation of holes.

Often the mileage of cars is such, that even chrome mirrors’ brackets rust. If the beautiful exterior car will appear in original paint, it is a miracle and it is H-1 dream. But that’s rare.

The good news: in spite of the fact, that the body is formally bearing, all its external elements are loaded minimally, all loads from the chassis are taken by the frame, so…

… The external rust is not a sentence, if from below you can see a live frame, with whole longitudinal members, sills, places of suspension fasteners, torsions, leaf spring struts and underbelly of the body. It is possible to forgive such a car even rotten thresholds of body and sills of sliding and driver’s doors. But usually, if it rots, it rots everywhere, and very often, it is quite successful externally specimen from beneath rots up to holes in load-bearing structure.

The primary attention should be paid to the actual elements of the integrated frame, its longitudinal spars, the attachment points of the units and the suspension. The metal is thick, but it does not save it. Hole and cracked longitudinal side members are not uncommon.

Slightly thinner power elements in the form of jambs supporting sills, bracket of pannier joint rod and other transversal elements, and also elements of coupling with engine shield and mudguards of engine compartment, also rot away thoroughly, especially at places of technological apertures location. It is necessary to say a separate thanks to very schematic lockers, which in fact do not cover anything and only collect dirt. It is often possible to pierce the secondary power elements during inspection not even with a screwdriver, but with your finger.

The thin metal on the outside and inside of the sills, front panel, and arches can simply disappear, turning into a sieve that barely holds its shape. That’s how the piece in the rear arch and the mudguard metal along the vertical body panel disappear. The strut between the spar and the body floor also suffers, it’s here with a torsion service window and is rotting around the perimeter.

Even front arms are rusty: despite very thick metal, they could be bent because of loss of durability, or torn out at the place of ball-bearer’s installation. In the “step” of the driver’s door, the bottom and the sill itself disappear. The body floors are rotting along the longitudinal spar, especially near the rear arches mudguards.

The front mudguards and inner arches rot away very seldom, but the absence of normal ventilation of the cavity under the noise isolation, especially on vans, where there is no heater of back part of the interior, but there is always a lot of condensation.

In general, Hyundai H-1 has to be inspected even more thoroughly, than 20-year-old Zhiguli, because you can’t find a fresh body for it at the nearest metal shop. Not all elements can be “welded in place” from black sheet metal (there should be another term, but you understand). And body elements for H-1 are not cheap. But, on the other hand, such cars are necessary for business, and after rough, but good repair the power structure will stand 5-6 years. If you will not get in an accident, of course.

In general it is possible to break absolutely everything, especially with mileage under a million and a hired driver. And Hyundai H-1 is the excellent confirmation of it. Broken handles, mirror brackets, locks, bumpers, headlight mounts, wiper drives simply speak about that the life of the car was not easy, and the owner was greedy. Almost everything is on sale, though not very cheap. But the original parts are quite durable, the cars with private use are usually fine. And Chinese parts are available, because the car was manufactured there until 2018.

Other people’s hands, treatment as a tool and huge mileage do their job. Finding a good and serviceable interior is difficult, but possible. In general, all done well, although the cracks in the dashboard, loose elements of the plastic front panel, detachable from the floor gearshift rocker speak of some mistakes designers, or lack of understanding of the specifics of the Russian operation of such cars. In practice, these are minor things, not worth special attention.

The main thing is that the mechanism of the sliding door is strong enough and can be repaired, though the outside handle is comparatively fragile. The materials of passenger versions are chosen well – the interior holds its 300 + thousand even in taxis and “transfers”.

The unequivocal disadvantages are extremely delicate execution of the climatic system with two heater and air conditioners. The conditioner is often simply switched off as restoration of all pipes and two condensers costs 40 and a half thousand even with used spare parts. And the system itself is capricious, which is not surprising taking into account the use of two TRV valves without balancing. The heater system is restored with metal-plastic pipes, clamps and radiators from Gazelles and Zhiguli, and also miscellaneous hoses. Original steel pipes under the underbody don’t look presentable after ten years of exploitation, and if the antifreeze is changed seldom, it starts to flow. As well as radiators of heaters, especially back. Presence in system of independent heaters only multiplies the quantity of problems.

Unfortunately, the list of problems does not end there. Strong people manage to tear cable controls of climatic valves, and the absence of filters strongly pollutes insides of the front climatic unit. And the life of fans is limited, with 300+ mileages they have been repaired at least once (with unpredictable results).

Simple wiring diagram and very “dull” wiring in truck style is a great help to the owners. Almost all items are perfectly repairable and diagnosable. But broken corrugated tailgate, driver’s, failure of the locks, broken dashboard, and fragile wiring in the engine compartment – these are typical cases. And in general, the H-1’s electrics aren’t as important as the condition of the body and powertrain.

From the serious problems – bad wire from alternator, it breaks just under it, and the very fixing of alternator on diesel engines. It is different from Mitsubishi’s here not for the better. The lower support breaks, the idler bar breaks, and sometimes the ear of alternator breaks off at skew. Mind you, we are often talking about 500+ miles.

I think the average condition of the first generation Starex/H-1 is clear: a decent car will be hard enough to find. Alas, the corrosion resistance is far from German, and the style of operation differs in the worst way from the same Transporters. Thus, let’s say, the car differs unprofitable from the GAZelle in price of components. But there is still a chance to find something “alive”. In the next part we will consider the running gear, engines and boxes.