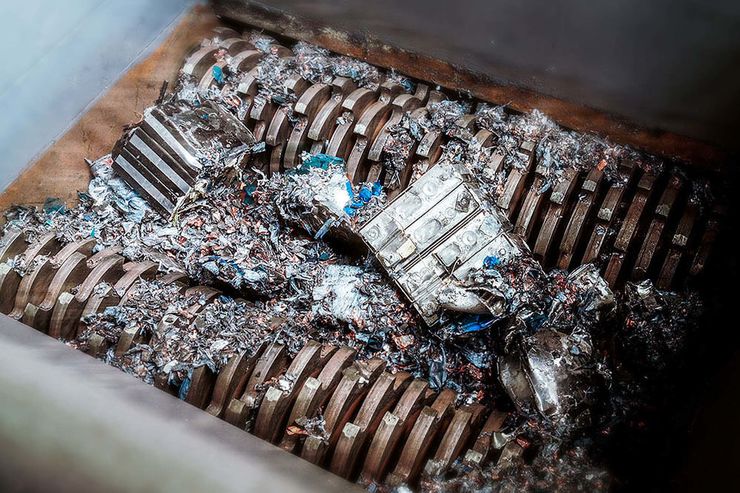 Many renowned studies show that e-cars have a better CO2 balance over their lifetime than combustion engines. But the accusations that the e-car is a raw material guzzler – key words: cobalt, lithium, cobalt, nickel – are not silenced. And wrongly so, as a T&E study emphasizes.

The CO2 balance of e-cars, which is ultimately better than that of combustion engines, is only disputed by degrees. For example, the 2019 study “The current greenhouse gas emissions balance of electric vehicles in Germany” by the Fraunhofer Institute for Innovation and Systems Research concludes, “An electric battery vehicle (BEV) purchased in Germany today shows significant greenhouse gas (GHG) savings over its average useful life of 13 years. The range of savings is from 28 percent compared to a luxury-class diesel car to 42 percent compared to a compact gasoline car, based on the electricity mix in Germany.” The assumption is essential “that the significant reduction in greenhouse gas emissions already achieved in the past in electricity generation will continue in the future”. However, only “in accordance with the politically set targets of the German government as well as predicted by various scientific studies”.

Raw material problem with batteries instead of CO2?

But what about the groundwater-guzzling lithium mining in the Atacama Desert and the human rights questionable mining of cobalt in the Congo? In our efforts to reduce CO2 emissions, aren’t we consuming far too much of these valuable raw materials?

Here, T&E compares the raw material consumption of electric cars and internal combustion engines from a perspective that tends to recede into the background when considering greenhouse gas emissions: the combustion of gasoline or diesel not only emits CO2, but the raw material petroleum is also absorbed in waste gas. And while this is converted into climate gas in the combustion engine while driving, batteries only wear out over the entire service life of a car, after which they may have a second life, and the raw materials they contain can still be used to a large extent even afterwards – as a raw material again – thanks to recycling. 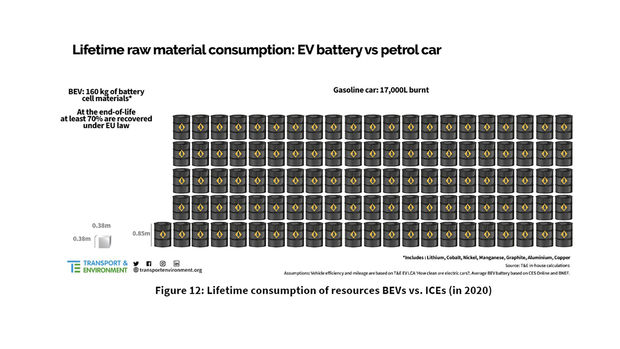 Petroleum is not only a fuel but also a raw material; electric cars use less raw material.

T&E’s calculation: An average combustion engine consumes 17,000 liters of gasoline (12,500 kg) or 13,500 liters of diesel (11,340 kg) during its lifetime. A tower of barrels containing this amount of oil would reach 70 to 90 meters in height, about as high as a 25-story building. In contrast, according to T&E, the cells of an average battery contain only 160 kilograms of metal raw material – which the e-car does not consume, but only uses. And recycling, according to the study, only fails to reuse 30 kilograms of the average battery (containing 1.8 kg of lithium, 0.4 kg of cobalt and 1.4 kg of nickel). This leftover metal would be barely the size of a soccer.

At the time of recycling, however, the battery had already been in use for about 15 years, and possibly even longer with appropriate second-life applications. This is because even the first use in an electric car can be extended a long way, since manufacturers have designed and built their batteries in such a way that they can be repaired comparatively easily and at reasonable cost.

Technology and recycling reduce the need for raw materials

As demand for e-cars grows, so does the need for raw materials. However, the study points out that new technologies require fewer raw materials per kilowatt hour produced. For example, the authors believe that the demand for lithium for this purpose will fall by 50 percent from 2020 to 2030 (from 0.10 kg/kWh to 0.05 kg/kWh). Cobalt, which has long been identified as problematic, is even expected to be used 75 percent less (0.03 kg/kWh instead of 0.13 kg/kWh). The battery manufacturers also achieve this by switching to nickel, after which demand therefore falls less (0.39 kg/kWh instead of 0.48 kg/kWh). 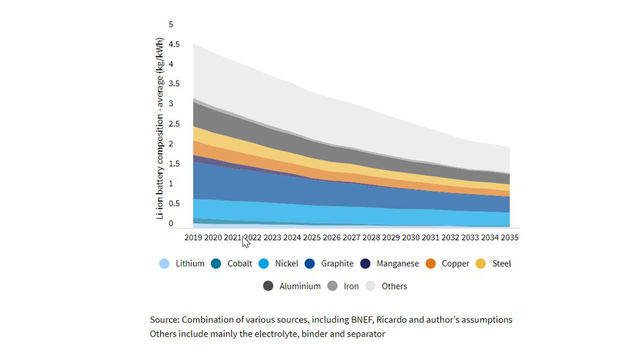 T & E believes that the energy density of batteries will increase from the current level of around 200 Wh/kg to around 350 Wh/kg by 2030 – which will reduce the need for metals for battery production.

Nevertheless, recycling is of course crucial on the road to environmentally friendly electromobility, they say. But the study’s authors anticipate increasing recycling rates; draft EU legislation would require 90 percent of the lithium (currently 70 percent) and 98 percent of the cobalt and nickel from old batteries to be used for new ones, instead of the current 95 percent. That would reduce the amount of lithium that is not reused by a factor of three; for nickel, cobalt and copper, it would be 2.5 times less. However, even ambitious recycling targets for 2035 result in a manageable reduction in the demand for primary raw materials: only six percent less lithium, two percent less cobalt and one percent less nickel would be needed. This does not sound very encouraging, but it must be borne in mind that more and more batteries will be available for recycling over time and that, conversely, demand for e-cars will increase particularly strongly until the market is saturated. 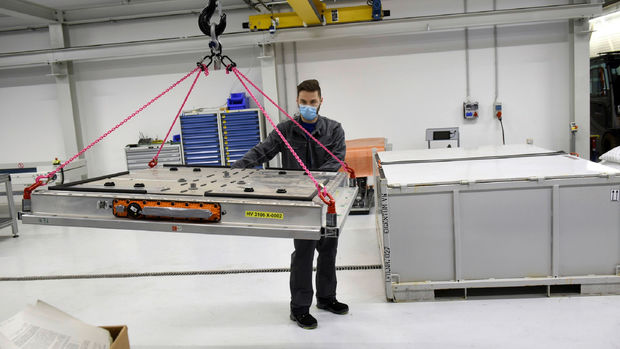 Battery recycling (here at VW) depends on the process – if batteries are simply melted down, the energy input is enormous.

Are there enough raw materials for batteries?

No, it is eyewash to emit a lot of CO2 in electricity production so that e-cars can be on the road with zero local emissions.

Forecasts differ on how green the electricity mix will be and when. However, the CO2 emissions generated during electricity generation will play a decisive role in determining when e-cars will be more CO2-efficient than internal combustion engines. That’s why the results vary from study to study. However, it is primarily a question of the point in time or the mileage. It is undisputed that e-cars, unlike internal combustion engines, can potentially drive almost CO2-free.

However, the common accusation is that batteries require a lot of raw materials, which are expensive, environmentally harmful and can be obtained under socially questionable conditions. However, the e-car does not consume the raw materials during operation, but uses them over its entire lifetime. And they can be recycled, which makes them durable and their use sustainable. The current T&E study rightly points out that internal combustion engines simply consume a valuable raw material even during operation, without being able to recycle it: Petroleum, which, after simply being burned, adds to climate change as CO2.