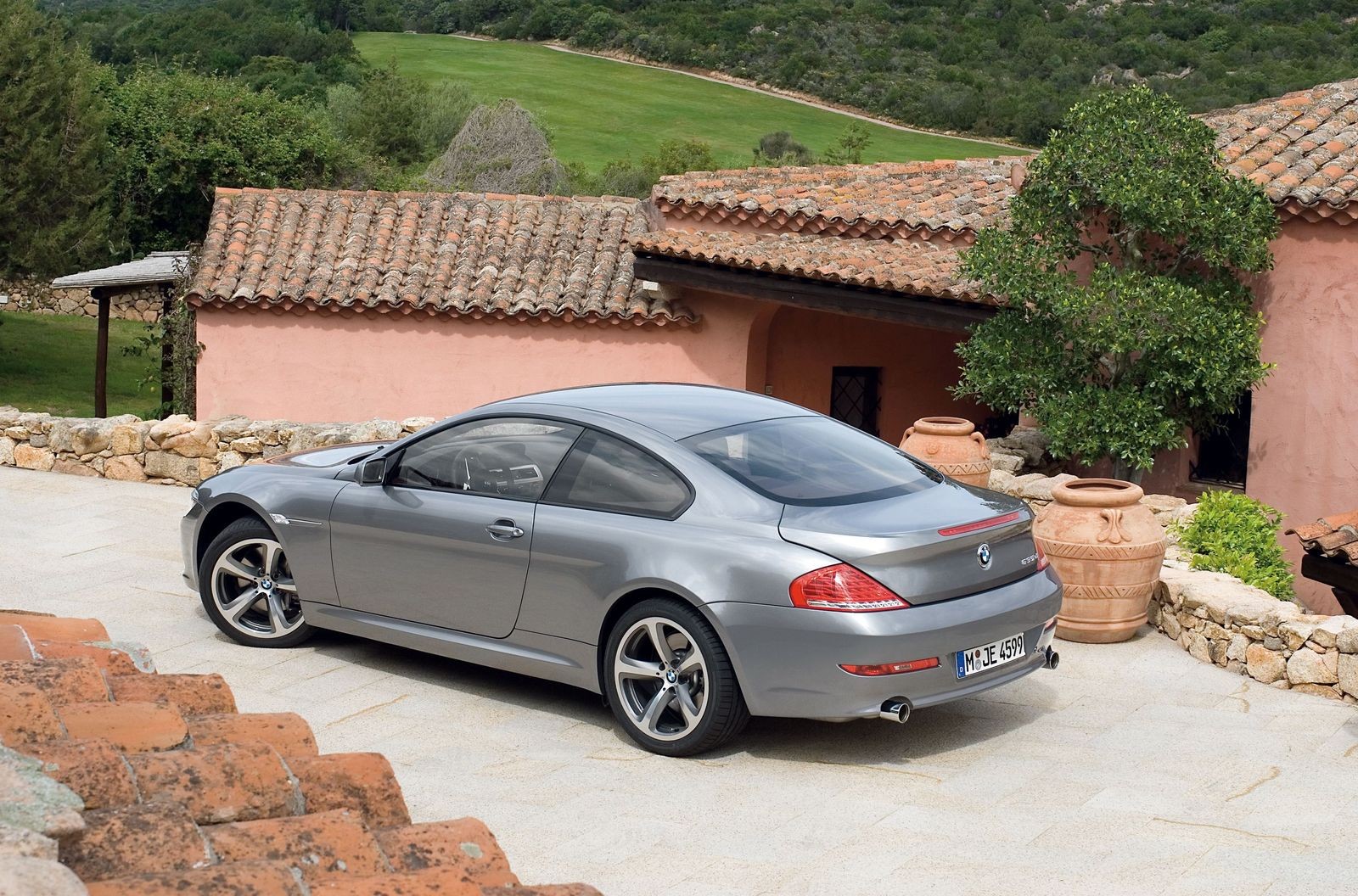 In the early 2000s, BMW wanted to create a successor to the E24, a large grand touring coupe that appeared back in the 1970s. The new model absorbed fresh solutions of that time, even though not all of them were to the brand’s fans’ liking even then. On the one hand, a shortened platform of the “Five” was a very good solution from the technical point of view. On the other hand, the design was considered by many as specific, especially the back part, made in the spirit of E65. However, this had little effect on the overall “coolness” of the big coupe, and in 2003-2010 “six” sold out around the world in quantities of more than a hundred thousand copies. By the way, almost half of this amount were convertible with its own index E64, but we have such cars, produced strictly with a soft top, not won great popularity. At the time of writing, for example, from 110 cars on sale on Avito cabriolets was only 7, or less than 10% of the total.

The folk wisdom, telling about the difficulties of finding an unbeaten BMW, is quite actual in case of “six”. Though, it is necessary to notice that the price and rarity of the model still leave chances for success: there are more popular, more compact and, the main thing, cheaper variants for ambitious youth. The big coupe is quite often chosen as a weekend car, though the engine lineup provokes for “feats” all the same. In general, examination of 6 series is worth to begin not even with a body, but with check of accident history – for example, with the help of Auto Book. And only then, having made sure of absence of large indemnities in history, to pass to body examination. The body is rather artful in set of materials: steel is basis, of course, but doors and hood are aluminium, and front wings and trunk lid are made of plastic. Accordingly, you should assess the condition of paintwork with these features in mind. You can look for usual rust on sills, suffering from “sandblasting” and rear arches, and also around windshield. Aluminum doors and hood don`t help to avoid problems: rust spots give themselves by swelling of paint. Well, front fenders can have defects in the area of contact with a bumper – as well as rear ones. By the way, one should also check up the underbody for damages: ground clearance of 140 mm with big width and wheelbase sometimes results in embarrassment.

The closed body does not mean total absence of problems with air tightness of the interior and a trunk. Frameless doors are demanding to condition of seals, and the panoramic hatch, even if it does not move, and only rises, can beset with a knock, and leaks. Moisture in the interior is extremely undesirable because of potential problems with electrics, which in BMW are not cheap. Though, dryness is also important for a trunk for the same reasons, because the accumulator is located there. Thus, water leaks in a trunk not only because of the same problems with seals, but also with lights, especially if they are poorly placed after removal. Well, in the battery compartment (because of which the “six” doesn’t even have a dock) there should be no consequences of water stagnation or electrolyte leakage. The convertible has to have additional inspection of the compartment, where the roof is folded – it should be dry and relatively clean there too.

And it is better to drive the E63 after purchase skillfully and accurately: the cost of body parts and optics disposes to it. For example, the hood costs over one hundred thousand, the bumper – more than 50, the windshield – from 30, and the xenon headlight, even not adaptive, will cost 70 thousand. Even a headlight – one front turn signal, separately made from it, will cost 15 thousands! And the reason is almost total absence of non-original substitutes for all listed above. Only the glasses can be found “out of plant”, and everything else in case of an accident must be either looked for on foreign scrap yards, or bought at a high price.

The suspension of the “six” also will not allow relaxing during the inspection. The schemes are independent: multilever behind and transversal arms up front, and they are not twin, that increases the number of changeable elements and rises in price of potential repair. Original levers cost 8-12 thousand apiece, non-original – from 3 up to 8, so disassembly of neglected running gear can undermine family budget. And that’s not to mention expensive solutions like an active transverse stabilizer, which costs a hundred thousand dollars a set. Of course, not everything costs awful money: for example, a non-original front hub assembly with bearing starts at 2.5 thousand rubles, and stabilizer struts – from 500 rubles. But the price of inattention can be high.

The situation with brakes is simpler: if calipers are not seized without maintenance, and the lines are intact, the consumables cost comparatively little money. Even the original brake discs cost 6-8 thousand per piece, and a set of decent pads can be bought for 3-5 thousand. Structurally there is no expensive know-how like Mercedes-Benz SBC system. But the active rack with variable force was offered as an option – those who want to receive a maximum of drive, it is not necessary to save money on its inspection and service. If a usual rack even in original version costs about 120 thousand, and you can buy a restored one for 50-60 thousand, then the active rack is more than 200 thousand. Fortunately, repair is mastered for it, too, and it will be about half as cheap.

The important difference of E63 coupe from relative “five” was absence of a full drive – these cars were only rear-wheel drive. Which, however, does not relieve buyers from the need to check the condition of the cardan and drives: the first is too expensive not to pay attention to him, and the second banal tears, especially with powerful motors. Additional load can be “fun starts” with the manual gearbox, which was offered for the “six” and is even found on the secondary market in pieces. The mechanicals from Getrag are rather strong and reliable, and taking into account a class of the car it is even possible to count on comparatively small mileage and good remaining service life. The most expensive “expendable” here, as one can guess, is not a clutch, but dual mass flywheel with 6-figure price tag. The alternative from Luk will allow saving several tens of thousands of rubles, but in general, apart from the general condition of the box, the flywheel is worth paying close attention.

There are two automatic transmissions for E63: classic automatics from ZF and SMG robotized box. The last one, however, is met only on M6, and it is impossible to buy such car for a million, so all attention can be paid to usual automatics. Three variants of six-speed 6HP were used here: 6HP19 with inline six, 6HP26 with V8 and diesels before the restyling and 6HP28 with the same after the restyling. Overall, the 6HP family is quite successful, albeit slightly less resourceful than the previous 5HP. Here, as always, a lot depends on the operating style and quality of service. Oil changes every 50,000 and rare intervals can promise 200,000 km before repair, and maintenance “according to the manual” and driving “like in BMW” will finish the automatic twice faster. Now, when the mileage of most cars has long gone over 100 thousand, you should be especially careful with the diagnostics and save a hundred and fifty thousand rubles for potential repairs in advance.

Only four-cylinder units didn’t get to the “Six” from the whole range of 5-series engines. The rest of the range was taken from the “Five”. True, the reliable M54 series engines did not get to the coupe: basic petrol engines are N52 before the restyling and N53 after it. These are modern BMW engines in all senses: powerful and technologically advanced, but hot, complex and not very resourceful. High working temperatures together with aggressive driving style usually limit the service life at the mark not more than 200 thousand, and oil consumption can start much earlier. In addition to that, the heavy coupe often squeezed all the juice out of them, so you should not count on a high residual life. On the N53, the direct injection was added to these nuances: here in the zone of risk both fuel injection system and injectors, as well as ignition modules. Additionally complicates the search “six” with the base motor is their rarity: six-cylinder version is only about 30% of the aftermarket, and most of it form the machines with V8. V8 engines are the representatives of the family N62 with a capacity of 4.4 and 4.8 liters. The first, by the way, occurs only before the restyling, and the second remained with E63 from the beginning to the end of its production. For these motors, in principle, all the same disadvantages as for in-line sixes are true: high operating temperature, inclination to coking of rings and oil leakage, as well as the increased cost of maintenance. And the transport tax of 50-55 thousand rubles, of course. However, due to the fact that exactly V8 engines are more widely presented on the secondary market, someone will be forced to choose among them.

A good option in terms of service life and reliability can be considered the three-liter diesel M57. It is quite old and relatively simple – here even the block is cast iron, not aluminum. Certainly, the fuel equipment is not cheap, maintenance of successful chain timing will be rather expensive, and the turbine sooner or later will ask for money, but against a background of petrol units the diesel is simply an outlet for someone who wants to drive a “six” for long. True, there are two questions. First, if for “five” the diesel engine seems to be forced, but a decent variant, then the diesel coupe is already frank “a marriage of convenience”. And secondly, such way at one time was thought by well-to-do buyers of E63; therefore diesel cars are piece goods. For example, at the moment of writing this article, there were only 3 diesel models from 110 cars on sale.

And now, having briefly found out why the choice of E63 coupe is so difficult, let’s try to form a portrait of the optimal copy. In fact, this is also quite a difficult task. As we’ve already figured out, the best choice in the long run is a diesel, but there are almost no cars with it. Cars with gasoline “sixes” are often let down by price: they are cheaper than variants with V8s, and they are increasingly bought by those who can no longer afford quality service. So, choosing the best car for a million, you will have to lay down the sum for diagnostics and future repair, having stopped on coupe with V8. Here is still a chance to find well-groomed car from the well-to-do and responsible owner – approximately such.

Well, if to break a piggy bank and add 2-3 hundred thousand, it is possible to look for rare copies from the first owner. For example, such car inspires a hope that in the nearest several years it will be possible to serve it only qualitatively, getting in return a maximum of what Bavarian engineers have put in it.