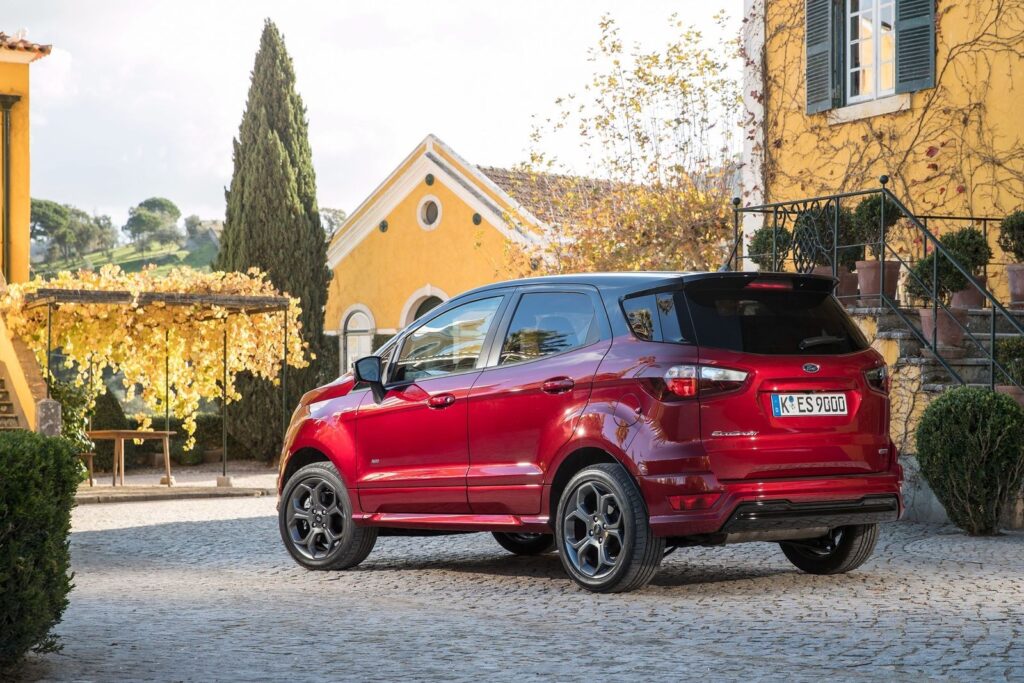 It must be admitted that the market experience of EcoSport was still greater than that of Opel Mokka: if the “German” came to us in 2012 and left already in 2015, then Ford debuted in 2014, at the end of the same year was localized and remained on the market until 2019. And the localization of the car was quite deep: for example, since 2016 under the hood appeared 1.6-liter engines of Russian production, which Ford produced at the plant in Elabuga. EcoSport also kept up with the little things: the clearance increased for Russia up to 200 mm, the overall adaptation of the car, the adjustment of the engines for the 92nd petrol … However, despite the localization, the prices for CDs remained not the lowest in the class. So after its disappearance last year, few people were seriously grieving for its loss. So what awaits those who want to catch up and buy a crossover now?

Given that the age of even the earliest cars barely exceeded five years, it is still too early to talk about body problems in cars without an emergency past. Small accidents can break the gaps between the wings and bumpers, and given that a small EcoSport was often the first car, including girls, such accidents are quite possible. In addition, complicates life and parking for beginners spare wheel, suspended on the trunk door: insurers changed the dented doors entirely, so if you recognize a “non-native” element, you can not be surprised. The plastic cover of the spare wheel, respectively, also often suffers, so on some cars instead of split factory can be seen something universal.

Most of the possible defects here are quite typical: chips on the edges of the wheel arches, nascent corrosion under the plastic door sills, repainted because of the “bugs” hood and spot problems on the windshield frame. On the other hand, there is little chromium in the exterior, so the turbid moldings are not so noticeable and upset the owners. In addition, EcoSport does not collect any complaints about the quality of processing of body panels and the uniformity of gaps, which were found in expensive Explorer.

This, however, does not mean that the owners do not meet with annoying little things. For example, the hood can be repainted not only from the outside, but also from the inside, from the side of the engine shield: here on it wipes the paint seal under the windshield. In the best cases, the issue was solved by the dealer, who repainted the hood and glued the protective film in the contact area. However, the question of rigid seals rubbing paint, concerns not only the hood, and the entire machine: abrasion can be found in the doorways and the luggage compartment aperture. In general, repainted apertures, glued with film – it is not necessarily a consequence of an accident.

The fifth door can puzzle not only with this. First, moving the number to the bumper because of the spare wheel did not save the metal from potential problems: the mounting points of the bracket should be examined for creeping rust. Secondly, the small door on which the heavy spare wheel is suspended, “plays”, rattles and creaks on the move, so the hinges are clearly not smooth, and they also need to be checked. And thirdly, here you can assess the performance of the wiper: in winter, snow and ice, sliding from the rear window, accumulate right on the wiper, and those who are lazy to clean this area by hand, slowly but surely finish the mechanism. By the way, the electric actuator for opening the trunk also sometimes fails, forcing you to sweat when unlocking the fifth door.

Taking into account the claims to the off-road skills of the model, it is worth to examine the lower part of the car. In general, everything here is limited to small defects: The “lip” of the front bumper suffers from contact with kerbs, and the resonator of the exhaust system on all-wheel drive cars is not very well located, limiting the angle of exit and becoming a point of contact in difficult situations. Most owners understood that EcoSport is not an off-road vehicle, so all-wheel drive vehicles are extremely rare: at the time of writing, there were less than 15% of the 200 vehicles on sale on Avito. Accordingly, the traces of “great ambition of the owner” on the bottom are a reason to look for another car.

Pendants crossover, built on the same platform as the Fiesta, got a slightly different: if a hatchback at the back of the hatchback no alternative beam, the all-wheel drive EcoSport received an independent multilever. Ahead, of course, McPherson, but also not fully unified with the Fiesta. And it did not play into the hands of the owners of the crossover: due to the low prevalence of the model, some details here can be purchased only original. If the stabilizer racks fit from Fiesta and cost from 400 rubles, then the front L-shaped levers are claimed only original, 6 thousand each, as well as shock absorbers for the same 6 thousand. In addition, the ball bearing is normally changed with a lever, and the list of available non-original consists of one option. For those who are satisfied with the front drive, it will be easier: maintenance of the rear beam will be cheaper, except that the shock absorbers and the rear will have to buy the original. Although, for example, the hub bearing there changes in the assembly with the hub and costs from 5 thousand for the non-original part. Well, the owners of four-wheel drive vehicles in addition will have to either buy the original levers of 7-10 thousand, or pick up the silent blocks, and in general spend more money on maintenance. In general, the chassis, despite its simplicity, can throw a little trouble.

The situation with the brake system is simpler. Brake disks, for nothing that also “unique”, are offered in assortment and inexpensive, and brake pads here universal, from Focus and other models. The only unfortunate circumstance is non-alternative drums on a back axis, which so finish some owners, that they change them for disk mechanisms from the same Focus. However, in general, the brakes are not so often criticized, so here you can limit yourself to a standard inspection of highways, calipers and disks. The same applies to the EPS steering: there is nothing to service, so you just have to make sure that there are no knocks and that the EPS itself works correctly. Inspection can be expensive: rare offers for refurbished laths start from 35 thousand rubles, and the original costs all 50.

As we already know, all-wheel drive EcoSport is not so easy to buy due to their rarity. However, the very scheme of four-wheel drive, especially before restyling, here is quite typical for the crossover: the handout (or rather, angular gearbox), cardan and electromagnetic clutch on the rear axle. After the restyling system was unified with the older Kuga and Explorer: the clutch became electro-hydraulic, but in general the work of the automatically connected rear axle has not changed. Accordingly, now when inspecting the all-wheel drive EcoSport, the main thing is to make sure that the owner did not follow the instructions of the regulations, which do not provide for oil change either in the dispenser or in the gearbox. In addition, there is a variant of dispensing without a drain plug (the curse of the owners of Explorer repeats), which further increases the cost of oil change procedure and repels the owners from it. In general, if the oil already contains signs of wear, the good can be expected. And still do not forget about the state of the cardan: the cardan is here, as it should be, is changed in the assembly for 60 thousand, and even ready-made kits are not available, so pick up the suspension bearing and so on, if necessary, will have to “in place”.

During the recent selection of Ford Kuga, we found out that the gearbox is one of the stumbling blocks of the model, and for EcoSport it is even more relevant. If for Kuga Ford six-speed automatic rifle 6F35 as an alternative to the PowerShift robot was initially offered, the younger model has a classic ACS only after restyling 2018. In this case, both options can not be called ideal. If the robot can upset not only the jerky work, but also the wear and tear of the clutch, and problems with mechatronics, and other typical features, the machine really long lives only those who change oil once in 20-30 thousand kilometers and is not fond of active driving. If you drive regularly, the box is happily warmed up, saturates the oil with products of wear (in particular, the dust blocking torque converter) and “self-killing” to 100-120 thousand kilometers. At EcoSport automatic machine lives a little easier because of the smaller weight of the machine, but it is better not to make discounts and do not save on maintenance.

Hand boxes on this background – almost ideal: and five-stage IB5, and six-stage MMT6 have long been familiar with other models of Ford and have no congenital flaws. If they have changed oil at least once, then most likely, there will be no problems for a long time. However, those who want speakers, should remember that you have to pay not only for the clutch: the price of the flywheel on a two-liter engine is literally an order of magnitude higher than the 1.6-liter. The reason is transparent: if on the younger engine it is a solid piece of metal for 6 thousand, then on the older engine it is a two-mass flywheel for 60. So the knocking, squeaking and other noises while working with the clutch pedal are the reason for bargaining.

EcoSport had three variants of the engine, and if we talk about wide distribution, then two, and both before restyling. Until 2018 under the hood worked perfectly familiar to us by Focus atmosphere at 1.6 and 2 liters, and the first from 2016 even produced in Russia. It has a capacity of 122 hp, cast iron block, belt drive timing and distributed injection – that is, all chances for a bright future. Two-liter 140 hp unit, usually under the name Duratec HE, is also not young, simple and reliable. The timing drive here is chain and even more resourceful, and from the details it is worth paying attention to the plastic inlet manifold flaps, even though the age of the machines does not yet have to destroy them. The 1.5-liter Dragon for 123 hp appeared after restyling. – The piece is a little bit more complicated, even if it is not the same engine with supercharged and direct injection that was installed on Kuga. So, even despite the absence of chronic diseases in these engines, buying a car with it must be conscious.