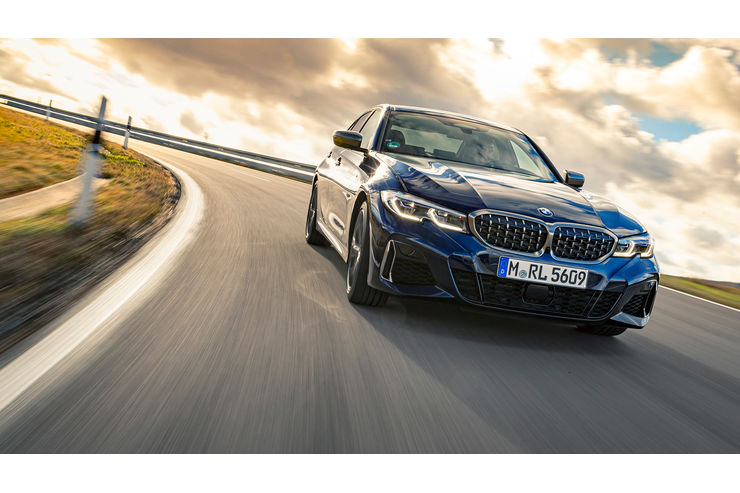 By the time the new M3 appears, it is the most powerful in the series. The M340i relies on six turbocharged cylinders, has 374 hp and processes the power via all-wheel drive. However, the sedan rages more like a rear-wheel drive car. Too much of a good thing?

Colleagues don’t exactly erupt in cheers when they recall the 340i from the F30 series. It was a rather well-behaved 3-series – not one that would upset you on a country road, and certainly not on a racetrack. Things are different with its successor, the M340i xDrive. With the M badge, it rises to the level of a performance model – and drives just like one.

Until the arrival of the new M3, the M340i is even the series’ crème de la crème. In 2021, it moves back to the second row, moving from top model to link. Just like the C 43 at Mercedes-AMG. That’s exactly what was missing in the 3-series: With the 340i, BMW had only stretched a thin wire to the top; now it’s holding a thick rope.

Critics will object that rear-wheel drive is no longer even an option. That diminishes the driving fun. We can reply after the test: Never mind, because the sports sedan drives like a rear-wheel drive car – despite all-wheel drive. It’s all a question of set-up.

On the racetrack in particular, the M340i behaves like a carnival barker, letting off steam. It’s enough to caress the gas, and the five-link rear axle takes off on a sideways dive. Open the steering, take the bend with a full broadside, that’s fun. It’s only spoiled by brake fade on the second Hockenheim lap, which doesn’t help the lap time any more than the lateral stalls. The four Michelin tires crossed the finish line after 2:01.1 minutes. Don’t misunderstand: That’s already fast, but the 3 Series could probably be even faster with a little more serious handling. The big question: have the BMW developers perhaps overshot the mark a bit with the cheeky set-up?

The all-wheel drive does the trick in everyday driving

The M340i impresses with its stability in long curves. Lateral tilt? Only a little. As soon as the bends tighten up, the sports sedan convinces first with neutral turn-in behavior, then with traction.

We find the answer in everyday driving. In addition to “EcoPro” for fuel-saving driving and “Comfort”, the driving menu also has the “Sport” and “Sport Plus” settings. You don’t have to think twice for a trip over winding country roads: The 3-series wants to be driven in a sporty manner, so you also have to set the characteristic curve of the steering and dampers as well as the response of the engine and transmission to sporty. This is done via the recessed switches on the center console, which look fancy but take a bit of getting used to. A real button with corners and edges conveys more tactile feel – whether you’ve got hold of it or not.

Be that as it may, the 3-series convinces with its high-resolution screen, which can be addressed, touched or operated via the rotary dial; with the ergonomics in the cockpit in general and the low-positioned sports seats in particular. They are tightly padded, yet sufficiently flattering for longer journeys. Like the whole car anyway. Of course, the chassis lets you know that manhole covers or brittle trip hazards in the asphalt will shake it up. But it absorbs low blows like the cover of a good boxer. The driver notices it, but isn’t thrashed.

But now to the essentials, the sporty stuff. The M340i impresses with its stability in long curves. Lateral tilt? Only a little. As soon as the bends tighten up, sometimes twisting in nastily and then opening up again, the sports sedan convinces first with neutral turn-in behavior, then with traction.

The driver doesn’t have to be an artist. Turn in, wait a moment, step on it as soon as the exit of the corner appears in the corner of your eye: Then all-wheel drive and limited-slip differential lock in the rear axle, so that the M340i accelerates out as if on rails. In Sport Plus, the stability control loosens up, allowing more extended drift angles without the rear end threatening to break away. The driver steers via the gas pedal. The M340i xDrive moves in a decidedly sporty manner without bringing beads of sweat to your forehead. Really cool!

Lateral dynamics sweep you along 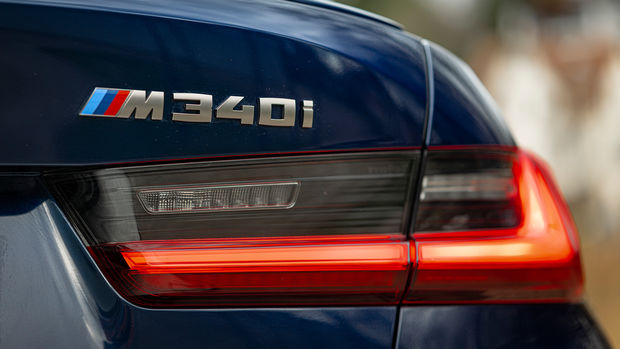 With the M badge, the top model rises to the level of a performance model – and drives exactly like one: completely naturally from the gut, without a filter.

Its appearance doesn’t exactly make it look like a sports car. The M340i does have a grimmer face than, say, a 330i, larger cooling vents in the snout and blue-colored brake calipers under the 19-inch wheels. But you don’t immediately identify it as a sports model at first glance. That may also have something to do with the dignified paint job.

But the lateral acceleration is much more thrilling than the longitudinal dynamics. In slalom, the M340i shows off once again, wants to be steered in a bit earlier, then pushes with the rear end in a wonderfully light-footed manner when changing direction quickly. With this affable oversteer, it becomes a buddy type. The M340i drives naturally from the gut, without filters. The M3 has to work hard.

With its 1,745 kilograms, the M340i is quite a heavy sports sedan. By way of comparison, the C 43 weighs 1,711 kg with a full tank. Nevertheless, the 3-series is convincing in curves – and with its temperament. BMW has shown with the M850i and M8 that it knows how much air to leave for the top model. That’s why I’m not worried. On the contrary, I’m looking forward to the M3 (G80).