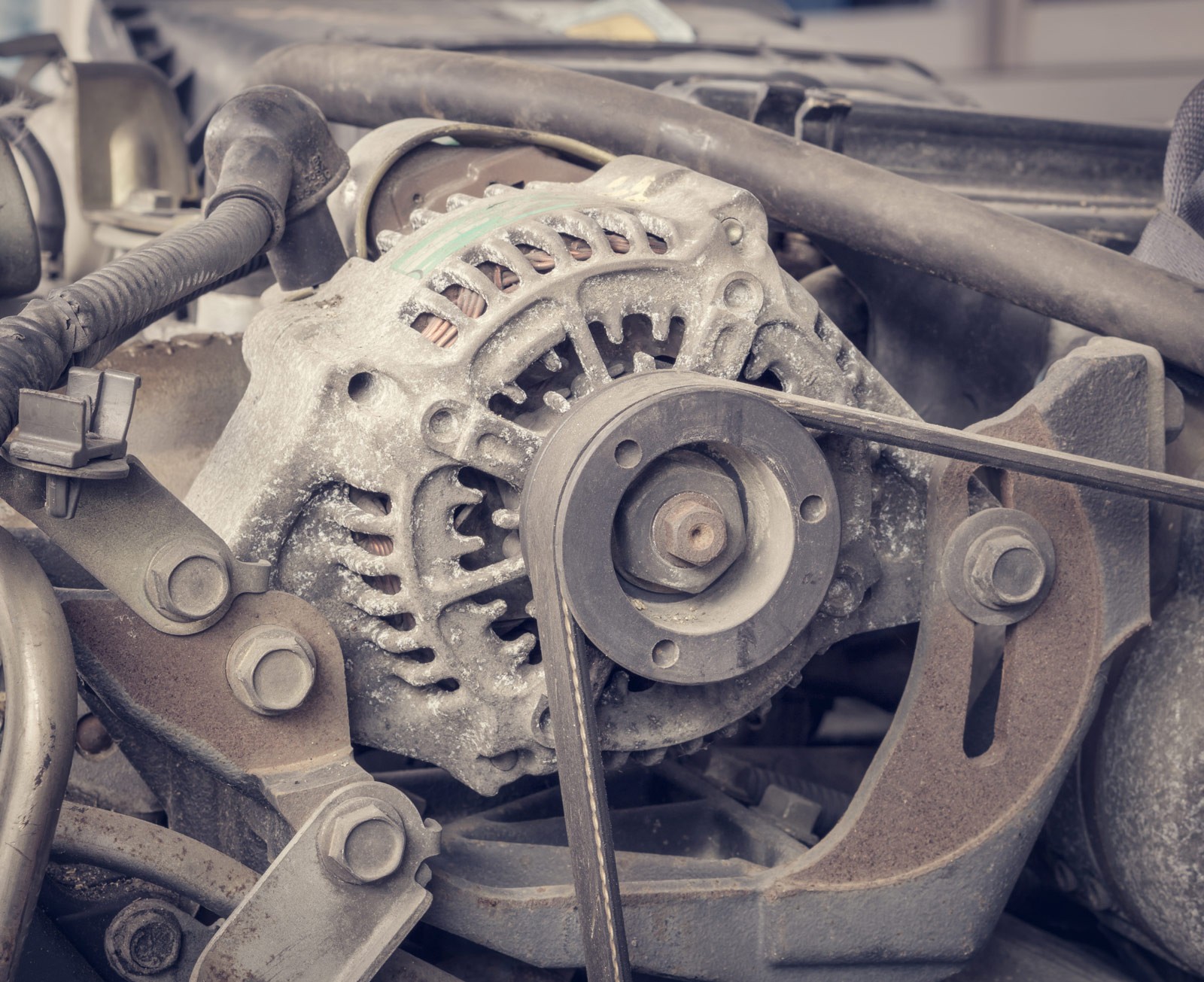 From simple to complex

Let’s start with the belts. No matter how you spin it, they are the ones that whistle most often. Of course, the timing belt cannot whistle – it is cogged, but all other belts of the accessories (drive or service belts – whatever you like) can whistle very loudly.

The cause of whistling can be different. First, a loose belt tension could be to blame. This is all too obvious and simple.

Second, the belt itself gets old. Over time, it “tears” – loses elasticity. Such a belt can’t adhere to the pulley well enough and starts slipping, even if the tension is all right. If in addition to all that, it also “eaten up” by tens of thousands of kilometers, the whistling will appear for sure.

Third, the belt can be just dirty. And here you need to analyze why it is dirty. If a car has no normal protection from below, then everything is clear: water, sand, dust – all this is deposited on the belt. And if the water dries quickly, the same sand can’t dry out, but it’s easy to gnaw out the belt’s rivulets.

It also happens that something from the car leaks onto the belt: oil, antifreeze or brake fluid (the latter, of course, is unlikely, but still). And if antifreeze or brake fluid, most likely, will not do much harm, but engine oil is quite aggressive and corrodes the belt material. If the belt is in the oil, it should be replaced. And, of course, only after the cause of its splashing is found and eliminated.

Since it is not only the belt that can whistle, at the same time you have to make sure that it is the cause of squealing. The easiest way is to splash water on it. If the belt is just blistered from age, it may help a little. And maybe not, because if it is weakened, the whistling will become even stronger. But at least you can tell by the change in sound that something is wrong with the belt. This is especially useful if there is more than one drive belt: water will help you figure out which belt is whistling. Well, if it doesn’t work, it’s no big deal: the water will just dry out. With today’s trendy belt sprays, the situation is more complicated.

Theoretically, these sprays are designed not so much to diagnose the problem as to solve it. A spray usually contains a funny ingredient like pine resin. The resin is nothing more than regular rosin, which costs about 20 times less than a spray. True, it is difficult to apply it to the belt, but the principle of action is exactly the same: increasing friction. There is also alcohol in the spray, which can soften the belt a bit. It seems to be a perfect recipe: the belt gets elasticity, and the resin increases friction. But all is not so serene in life.

No one knows how long an old belt will last after being treated with alcohol. Maybe it’ll tear in a couple of days. It can happen. And rosin is even worse. Yes, the belt will stick to the pulley much better. But the spray forms a sticky layer on the inner surface of the belt, which attracts not only the pulley, but also all the crap from the road: dust, sand and everything else. All of this also greatly reduces its life span. As a result, there is an effect of the spray, and sometimes it can really help. But spraying it on the belt indefinitely is not worth it. That’s why I would refer this spray, in the first place, to diagnostic tools, not to repair tools. If it helped, it means that you need to change the belt (and you need to clean the pulley grooves of the resin at the same time). Repairing the belt with this chemical is like going to the Statue of Liberty every day with a bouquet of roses, hoping it will throw out the torch, accept the flowers and kiss the cheek.

You can also spray the belt with regular “wadding”. If it’s gone, it’s the belt that’s whistling, not something else.

The difficulty of diagnosis is that sometimes the slippage is not so much the fault of the belt itself, as the thickened lubrication of the bearings of the alternator. It is especially relevant now – in winter and in the cold (who have it this winter already). So if the belt still looks good, its replacement time is not up to date, and you still have whistling, then you have to think that the reason is in the generator, not in it. However, a short whistle after starting in a cold weather – it is not critical. The main thing is that it disappears for some seconds.

And what if it is not the belt?

Unfortunately, the belt is the lesser of the evils that can whistle and squeal. Anything powered by a belt spins. And if it spins, it has bearings. And here’s the tricky part: determining which bearing is whistling. Rollers (idler and parasitic), steering pump, pump, alternator, air conditioner compressor… lots of things can whistle. How to find it?

The most consistent ones start by dumping the drive belt. If, for example, the whistle or squeak remains, then look at what might be “singing” from the timing belt. It could be the rollers of the belt itself, or it could be the pump if it is driven by the belt.

If the whistle is gone, the belt is good and does not react to its spraying with “Vedeshka”, water or spray, then look for the unit that is making the nasty sound. There are different methods here. The simplest is to pump all the pulleys and rollers by hand, trying to find the backlash. Sometimes this method works, but in this case the bearing wear must be already very large. Or maybe it is almost absent, and the reason is again in the thickened or missing grease. Then this method will do nothing.

The second way is to use a stethoscope. Not everyone has it, but if you want it can be made from an old medical phonendoscope and a piece of suitable thick wire (nail, electrode – any metal rod of suitable diameter). Well, if this is too difficult, then a universal diagnostic device called a wooden stick will do. The device is elementary, but very effective. The only pity is that you need to get used to it. So, we take any wooden stick (preferably from hard and dry wood, a piece of wooden baseboard will do, a shovel handle – anything, but with one sharpened edge), and put one end of it to the axis of the roller, and the other clamped in the fist to the ear. And listen.

It is impossible to make a mistake with a stick, but there are two very important remarks: sometimes it is difficult to reach the needed roller (often – impossible at all) and if you poke with a stick anywhere you can put it under a belt. In the best case it will be torn, in the worst case you will manage to hurt the person who stuck it in a wrong place. So you have to use the stick wisely. The method is very old-fashioned and will not suit everyone.

What to do with rollers and bearings – everyone decides for himself. Sometimes it is actually enough to renew the grease, and sometimes only replacement helps. The main thing is to do it in time. Imagine if your car has one belt that runs both the pump and some kind of alternator. In case of belt breakage, you can drive 50 km to the house without charging, but you won’t be able to go at all without the pump. So, it’s better to be reinsured.

It is said not in vain that the best is an enemy of the good. It happens that in an attempt to remove some non-critical defect they make only worse. Trying to tighten the belt is one such operation that can lead to some collapse.

Belt tension is not taken from the ceiling. If the belt is tauter than it needs to be, it slips. And if stronger, it greatly reduces the life of the pulleys and unit bearings. The tension should be strictly set by the factory. If the belt looks like a stump, you should not tension it. Most likely, it will whistle so, but at that with big share of probability it will topple aside some quite working bearing.

It is not worth trying to tighten an old belt that is coming to the end of its service life. Externally, it may still look very decent, but its material is losing elasticity due to age and can’t fit well around the pulley. In this case, too much tension will only hurt it.

The same applies to all kinds of lousy analogs. It is clear that to pay three thousand rubles for some original belt instead of five hundred rubles for an analogue is stepping on your throat. But in this case you should be prepared for the fact that it may also serve less. Not always, of course, but quite often.

And another reason for the appearance of whistling – these pulleys of incomprehensible origin. They are changed rarely, but sometimes not too aptly. There are usually two mistakes: a little wrong with the diameter or – which also happens – with the number of pulleys. The diameter is not only the tension, but also the changed gear ratio, which the belt can fail to cope with and slip through. But a five-check pulley instead of a four-check pulley is usually a sign of garage hobbling. Not only can the load on the bearing change, but the belt can also skew during installation. In this case the whistling will be very persistent.

And, finally, lastly. Foreign sound from under a hood can appear not only because of mechanical reason – because of belts, rollers or bearings. Alternator diode bridge can also “sing” its songs. Sometimes a rusty exhaust manifold gasket whistles. Early on, the sound will also be whistling.

In general, if you want to train your hearing – listen attentively. And if you cannot do it, take your car to service. By the time that “good” sound comes out on its own, it may be too late.