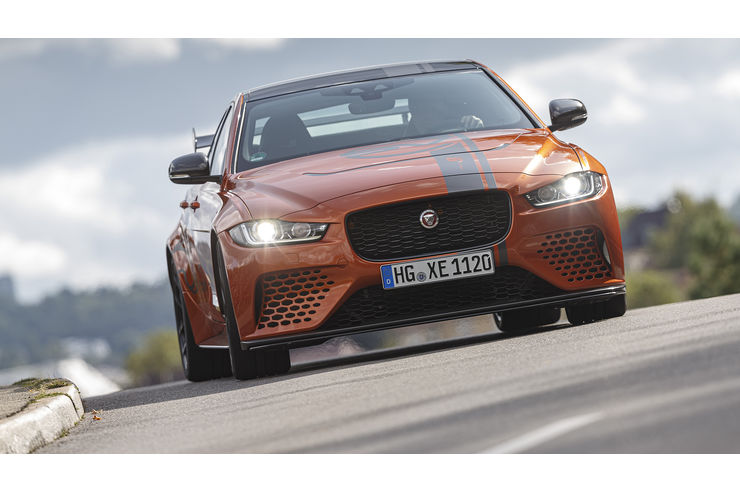 In our imagination, the development process of a sports car is a sensual act – a tête-à-tête between designers and engineers, whose desires gradually come closer and closer to one another, finally merging in ecstasy to create a product. Reality? Looks different. Unfortunately. There is hardly any room left for romance. Or rather: no time. Models are created in staccato. And, of course, driven by a quickie, so to speak, of demand and modular supply: one wants it, the other does it. And rattling, it’s crossover and over and over again.

But then you approach this machine, let your eyes wander over the perforated front apron, pause reverently at the partially exposed rear wheels and ask yourself where it is, the oh-so-existential connection between the customer’s desire on the one hand and a road-legal near-racing touring car on the other? Did people really walk in to Jaguar dealerships and ask for an XE without a back seat? Did they explicitly ask if the trunk floor could be raised in favor of a more efficient rear diffuser? And did a clientele that, yes, generally walks around in tweed jackets and pipes really want those cat tattoos on the paint?

I’m pretty sure that plans like this would have disappeared into a drawer at most other manufacturers – probably even under the carpet. Jaguar, however, waved the plans through. And was rewarded.

Of course it wasn’t! The people who ordered the first batch of the 300 total virtually the moment they appeared didn’t know minutes beforehand that they would want something like this badly. And that is precisely the appeal of this Jaguar. It obeys neither the laws of any series nor those of the market. It doesn’t have to squeeze into a niche, it doesn’t have to appeal to the base-jumping best-agers. Despite all outward appearances, it is not even a homologation model that entitles the owner to participate in race series XY and thus at least pays off in the long run. No, this one is the exception that proves the current rule, and probably for that reason the most spectacular Jaguar since the XJ220, which – by the way – it trumps by a good 50 horsepower.

I’m pretty sure that projects like this would have disappeared into a drawer at most other manufacturers – probably even under the carpet. Jaguar, however, waved the plans through. And was rewarded. With attention. With a boost for its image, of course, and with an official Nordschleife time of 7:18.4 minutes. By Ring definition, this makes the Project 8 the fastest of all four-door cars – and the competition, which was in need of an explanation, was inventive.

AMG unceremoniously transformed its 39-hp stronger, but a full seven seconds slower GT 63 four-door into the fastest four-seater to avoid the Jaguar. And Porsche also had to come up with another title for the Panamera: fastest luxury class, hihi! 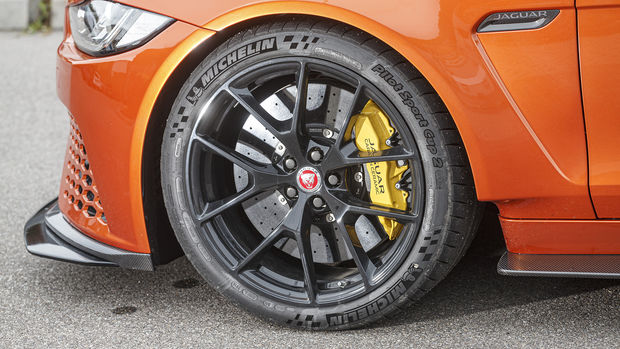 The wheel arches have been massively extended in favor of extra-wide sports tires, and wheel bearings made of silicon nitride ceramics reduce the unsprung masses.

But where does the supposed superiority of the Project 8 come from? Simple answer: from the consistency of its implementation. It is not just a fluffed-up production car, but a complete remake of know-how, heart and soul, and the freedom to implement both. The suspension with double wishbones at the front and integral wishbones at the rear has been turned upside down in terms of springing, stabilization and mounting, it has been given manually adjustable dampers and can be lowered by 15 mm for use on the racetrack. Not at the push of a button, but via spacers that have to be manually removed or fitted.

The wheel arches have been massively extended in favor of extra-wide sports tires, wheel bearings made of silicon nitride ceramics reduce the unsprung masses, while the flattened underbody, the manually extendable front splitter and the adjustable wing aerodynamically press the extraordinary gentleman to the ground – weighing up to 122 kilograms.

In everyday use, of course, many of these details are not noticeable, or only subliminally, but nevertheless the racing air takes hold practically as soon as you get in: Alcantara steering wheel with aluminum paddles; CfK bucket seats that press the hip fat into shape; four-point seat belts and, to top it all off, this completely de-cluttered rear compartment, where it’s not the little Mortimer junior sitting, but a roll-over railing complete with fire extinguisher. 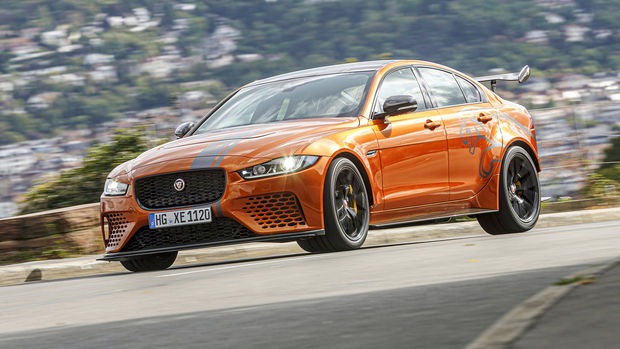 The XE is like British humor: dry and at times quite rough. No bump remains hidden, ruts exert a magical attraction on all wheels.

Then the door of the garage at home rolls up, and you’re seething out of the parc fermé, through the pitenga … excuse me, through the rose alley, and finally out into another world. One thing is immediately clear: driving pleasure has nothing to do with clowning around. The XE is like British humor: dry and sometimes quite rough. No bump is hidden, ruts exert a magical attraction on all wheels, and the torque converter automatic rams its eight gears into the kidneys with a running start. In any case, the atmosphere is up to temperature in no time at all, and the semislicks follow a few quick turns later. The body tension increases with the grip: Every movement suddenly gains noticeable substance, steering commands are implemented more immediately, lateral forces are tarred and feathered by the mechanical grip.

At some point, the small traffic circle in front of the supermarket fills up, and you seriously have to pull yourself together so that you don’t grab the car in front every time you make a left turn – stab nicely into the open door, brake past, jostle, then off you go, just like you learned in the good times of the DTM. But don’t worry: It didn’t get that far. We didn’t really get to experience the full power of the Project 8 until Hockenheim, where one thing in particular blossomed: the magnificent V8.

Basically, the five-liter direct-injection engine is an old acquaintance, but it has had its airways optimized again for its special use: a new intake system for better throughput plus a titanium exhaust system. All in all: 600 hp, 700 Nm, a correspondingly striking thrust at all engine speeds and, on top of that, the tremendous soundtrack that, depending on the load condition, mixes throbbing, throaty hammering and the subtle whine of the supercharger. 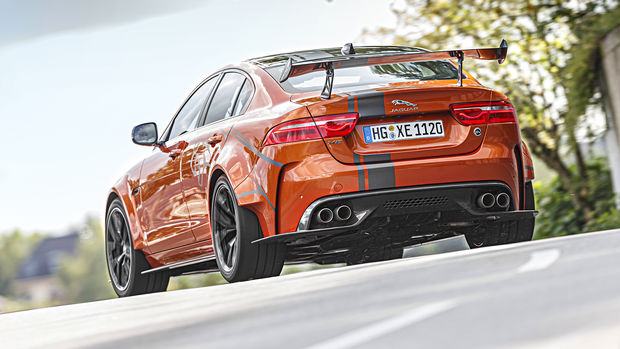 The powerhouse is laced with all-wheel drive, but it can’t quite keep up with the high beating speed of the surroundings. Despite an active differential and the strongly rear-emphasized power distribution, the lateral dynamics are literally stuck on the front axle.

The powerhouse is laced with an all-wheel drive system, which can’t quite keep up with the high speed of the surrounding equipment, though. The good news is that you don’t need a black belt in vehicle control or changing underwear. All you need is a rough plan of the ideal line, which then takes you to the limit without any fisticuffs.

There, however, the XE’s general compatibility gets in the way. Or let’s say: It blocks the last few percent of its actual potential. The problem: You can’t get the rear end into play. Despite an active differential and the strongly rear-emphasized power distribution, the lateral dynamics are literally stuck on the front axle. Load changes? Bounce off the unbending, possibly a bit too piously adjusted chassis, so that in the end you have no choice but to reel off the GP course. Stoically, at a consistently high speed level, but with tied hands.

However, the slight contrast between handling and build doesn’t detract from the fascination. Especially since, hey: 0.3 seconds ahead of an M5 Competition, that had to come out first, too. It’s strange that the Project 8 never really took off, despite the technology spectacle and the limited number of units. Three years after its debut, the special series is still available, and recently a more distinguished Touring variant was added – probably to attract pipe-smoking tweed jacket wearers.

What’s the problem? Is 182,000 euros too much for a hand-built extremist? Is it perhaps even too cheap and thus under the radar of collectors? Was it so clever to design all the examples as left-hand drive, when the hard core of Jaguar fans is based in England? Or is everyone nowadays really only into the quick marketing number instead of lust objects like this one, which actually seems to have sprung from our wildest fantasies?